Statistically, the Georgia Bulldogs actually match up fairly closely to the Ole Miss Rebels in many ways.

[ED: For a brief explanation of the methodology used herein, check out the initial piece in this series.]

Georgia is a talented and well-coached (yes, I realize that's up for debate), albeit flawed football team. I realize that such a statement could describe half of the SEC, but Georgia arguably embodies this better than their peers.

Yes, they are 7-1 (5-1) and a top ten football team, thanks almost exclusively to last weekend's hard fought win over the Florida Gators in Jacksonville, but it was just a week prior to that when the Georgia Bulldogs would struggle to beat the Kentucky Wildcats, only edging them by five points, and it was week prior to that in which Georgia would be blown out by South Carolina.

Here's how they stack up to the Rebels statistically: 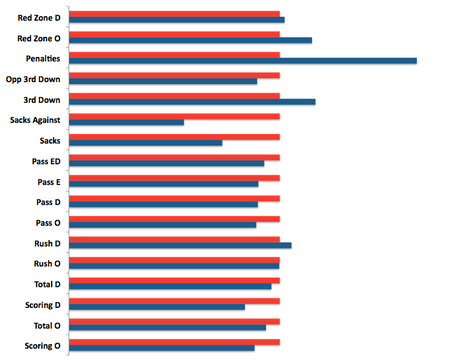 In most of the statistical categories we look at in this series, the Rebels are fairly evenly matched with the Bulldogs. Both of the teams are nearly identical in rush offense, rush defense, total defense, total offense, pass efficiency defense, third down defense, and red zone defense.

The Rebels' only real advantages are in red zone offense (kinda), third down conversion rate (sorta), and penalty yards per game (Mark Richt has lost control of this chart).

The Bulldogs have a good edge on the rebels in scoring defense, sacks, and sacks given up. They also hold a two turnover edge in turnover margin (+3 to +1 respectively).

With the type of talent Georgia has, especially the gamechanging talents in Jarvis Jones and Todd Gurley, this sort of statistical overview is nearly useless. Georgia is undeniably the better team between these two, but they are not demonstrably good enough for me to think the Rebels don't have a puncher's chance this Saturday.