Taking a look at the numbers you'll see that Texas A&M is either really much, much better a football team than Ole Miss, or that the data set is biased in their favor - if not a combination of both.

As I did with Alabama last week, I have taken a myriad of team statistics for the Texas A&M Aggies and compared them to those of our Ole Miss Rebels in order to get a sense of which football team has performed more proficiently and successfully thus far.

A full rundown of my methodology is beyond the link to the Alabama piece - in introductory piece in this series, as it were - but just for the sake of a quick refresher, what I've done is taken the statistics that I feel best measure a team's overall football prowess, meaning that I've excluded things like time of possession, which really may be the least significant statistic kept in football, in favor of stats which are measured in yards, points, and generally the things needed to win a football game. I then compared those statistics between Ole Miss and our weekend opponent to determine a "betterness" ratio, a ratio whose formula depends on the statistic itself.

Make sense? No? Well it will once I show you this:

Graphically, when taking these ratios and comparing them to one (TAMU/TAMU=1, so we're judging Ole Miss's statistics as they relate to A&M's), you get something like this: 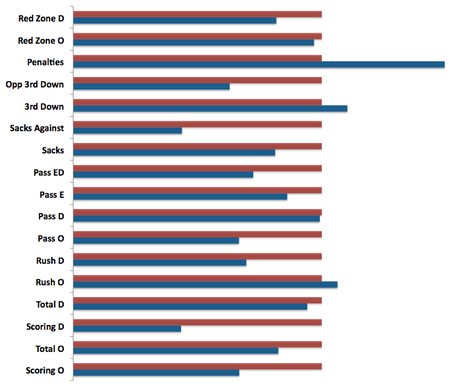 Note: I took the turnover ratio out of the graphic because it skewed the chart all funnylike. All you need to know there is that we've turned the ball over a lot and they haven't.

Here is where I would like to perfect this measure a bit by maybe adjusting the team's statistics based on those of the opponents played thus far, but that would take a lot of time that I frankly do not have. I say that because, while I do not at all doubt Texas A&M's talent and coaching, I do believe that a 3-2 team with losses to Texas and Alabama is going to compare all that well statistically to a 3-1 team with victories over South Carolina State, SMU, and the worst Arkansas team in probably two decades.

Regardless, A&M has scored in droves and kept their opponents from scoring, and they've looked good doing it. Where they really match up well against us is in the passing game, both the actual passing and pass protection, and on defense against the run.

Our Rebels though aren't exactly lagging too far behind the Ags all that much statistically, and have actually outperformed A&M in rushing offense, third down conversion, and penalty yards in spite of facing tougher defenses.

What can one glean from this? That, if Ole Miss does not turn the ball over, they will be in this one.