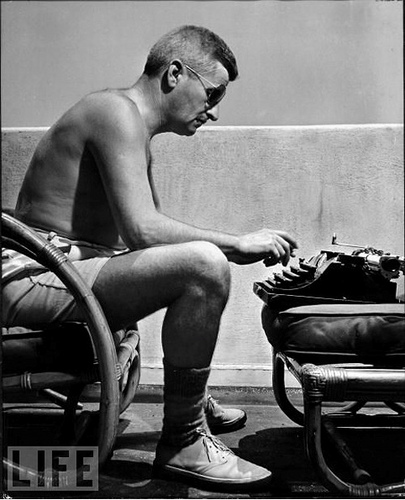 (Note: Yesterday evening, Good Bull Hunting fired the opening shots in the first annual Ole Miss/Texas A&M Faulkner Showdown with a post "Ackbarlom, Ackbarlom: A Literary Preview" by Dr. Norris Camacho. So here, fellow Rebels, is my humble attempt at defending our literary honor. Initially, I was going to adopt the style of a famous A&M writer, but eventually I realized that no one would recognize the writing style of their most famous literary alumni, Martha Wells.)

The boy smelled chicken. They had come to the Grove that morning, a part of the larger horde, in their cowboy boots and cowboy hats, come in their F-150 like all the rest, parked along the courthouse square so that the boy could see little else but the trucks as he and his father walked to the campus. He could hear the others’ high squawks and squeals, their calls of "Gig ‘em," but more than anything else, he could smell the chicken, a rich, smell of batter and hot, fresh grease, nothing at all like the small chunks of unidentifiable meat his father brought home from McDonalds, chunks coated in soggy crust.

“Eat your sandwich, boy,” his father said, though the wad of tobacco in his mouth made the words come out in a rolling, guttural jumble.

“Out yonder?” his father said, waving a dismissive hand at the rows of cardinal and navy tents, at the throngs of people mingling, shirts tucked in, red cups clasped like chalices in their clean, unbattered hands.

“Yessir. I just want to look around.”

“I reckon if you’re fool enough to step off the sidewalk on that grass, I ain’t liable to stop you.

The boy knew better than to respond, knew better than to engage his father in further dialogue, dialogue that could end with his father’s flaring temper, with the hollow pain of a knuckle digging into an eye or a booted foot to the ass. The boy was off into the crowd, off into the grass – what grass! Lush and thick beneath his boots, to feel the heels sink down, to feel the pain in his ankles from years of concrete boot-clatter die down, this was joy! – and heading full bore to a tent knotted with people. Through the bodies he could see it, the golden batter, fingers of breast meat curling like God’s own blonde hair. How different it all was! How different from the long dirty parking lots in Lubbock and the stinking rot of Austin and worst of all, the tepid ugliness of his own native land. A woman passed in a dress. Her hair, coiffed like some great cascading tidal wave, spun and bounced as she jiggled by, and the boy stared hard, stared like he’d not stared at anything before, like he wanted to stare at the chicken on the table, though he didn’t dare affix his gaze there, lest one of these people should notice him, should take him for a beggar – “Don’t accept nothing you ain’t took for yerself,” his father commanded, and as always, the boy obeyed.

The man, a great, expansive, red-faced man, a man who smelled like alcohol – though not the cheap grain liquor his father drank from coffee cups at the kitchen table – laughed and shook his head. “We’re the Rebels. The mascot’s a bear, but we’re the Rebels.”

Rebels, the boy thought. The enemy! Ourn! Mine and hisn both!

“Would you like a bite of food, little Aggie?”

Chicken! the boy thought, but he said, “Naw. I already ate.” In his stomach, the lump of dry white bread roiled and knocked against his insides, but the boy walked away from the tent, back through the grass, its lushness now a taunt, a heckling jibe that rang in his head with each step enemy enemy enemy.

He wanted to run back to his father, wanted to shout “Gig ‘em,” wanted to believe in the words the way he once had, but there was another part of him, a part that wanted to turn and run deeper into the tents, run through the grass and over the grass and eventually be a part of the grass, feel the sun dappling through the oak leaves, feel the soft trod of bootless feet atop him, drink in the spilled liquor and eat the crumbs of batter and chicken that fell to his hungry mouth.

From somewhere in the crowd, a voice hollered “Are you ready?” and the crowd began to chant, their words a pulsing tide that flowed around him and thundered through him, and he knew his father would be angry if he didn’t return, if he didn’t sit beside him on the concrete sidewalk and speak the truths they had to believe: that they belonged here, that they were a part of this conference, that these people were enemies they could look down upon, that their history was something more notable than what the boy suspected it to be. The chanting ended, and a few stray shouts of “Hotty Toddy” rose up, and the boy thought I hate them, I hate them, I hate them.