Where do the Ole Miss Rebels stack up statistically against the Arkansas Razorbacks?

[ED: Check the introductory piece in this series to look at the methodology.]

Well, it most likely isn't that last brand of Arkansas football, and is much more reasonable to suspect that we'll see out of them what we have seen out of them in October thus far. We'll probably see a team that clicks offensively and can significantly inhibit their opponents from doing the same...

But, then again, it's Kentucky and Auburn.

On the year thus far, Arkansas has struggled to stop the pass, protecting the football, and establish a run game. They haven't struggled, however, at passing. In fact, they are first in the SEC in pass offense, while last in pass defense, rush offense, and turnover margin.

So there's your formula for victory this weekend. Ole Miss should limit its turnovers against Arkansas' and pass its way into the endzone, all while exploiting Arkansas' incredibly one-dimensional attack. 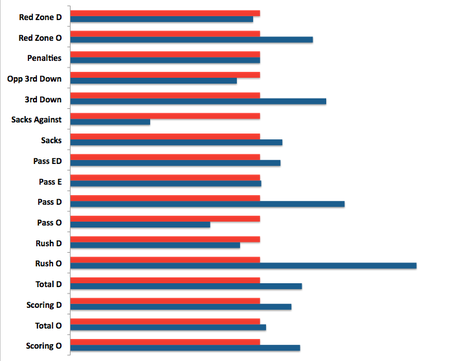 The Arkansas advantages are obvious and expected. They're a better passing team than Ole Miss. They do a great job of protecting Tyler Wilson and he is fully capable of carving up a defense, especially one as young and undersized as ours.

The Rebels, though, are better overall on defense (of course, Arkansas' blowout losses to Texas A&M and Alabama most definitely skew this) and have a dominant rushing attack.

Considering this, it will be interesting to see how these teams prepare for this game coming off of bye weeks. Those bye weeks, coupled with the "neutral" location and early kickoff could conspire to produce a game which is altogether difficult to predict by the numbers.