If games were won on paper, Ole Miss would have the W over Auburn for this Saturday's SEC West matchup.

[Visit the first installment in this series to get a better sense of the methodology used here, if it is not readily clear to you.]

You want to see what a significant statistical advantage over a team looks like? Great, because this week's statistical analysis of Ole Miss and Auburn gives you just that.

That's right, you read that correctly, Auburn's rush defense is the worst in the SEC.

Of the 17 statistical categories I keep, Ole Miss has outperformed Auburn in 11 of them. The teams are tied in one category. So in only five categories has Auburn outperformed Ole Miss, and just two of those - total defense and third down defense - see Auburn hold a real distinct advantage.

Oh, and I stopped keeping turnover margin because it skews the numbers wildly, but it is of very critical note that Ole Miss is -1 at turnovers through the year while Auburn is -11, making the Tigers by far and away the worst team in the SEC at protecting the football. 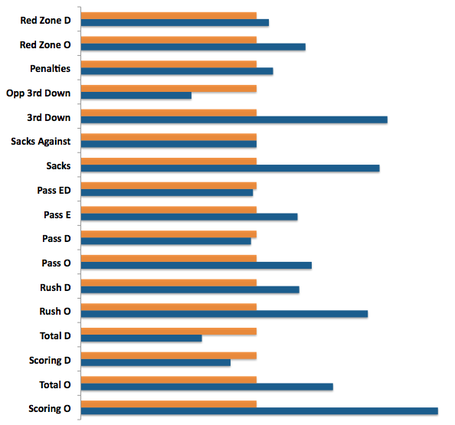 Simply put, through six weeks of football, Ole Miss is better than Auburn at most statistical categories. In the categories which sees an Auburn advantage, the advantage is not too significant.

The Rebels should win this one, but WAOM. Worse things have happened.