Hey God, It's Me, Godfrey: The Southern Illinois Game

Share All sharing options for: Hey God, It's Me, Godfrey: The Southern Illinois Game

Every week during the college football season, noted Ole Miss fan Steven Godfrey opens a dialogue with his namesake: "God, Allah, Yaweh, Etc.," creator of all being, to discuss the meaningful and superflous alike. And to barter, barter like a Indian spice trader, for some kind of piece of mind.

Godfrey: I should've known as soon the humidity failed to even live up to May standards, let alone Labor Day Weekend.

God, Allah, Yaweh, Etc.: And hello to you, too. You want evidence that all that pedophilia caused Catholicism to fall out of favor with yours truly? Compare the weather (and celestially influenced outcome) of the BYU game with that of Notre Dame.  I'm doing what I can to remove the link between pederasts and college football. Mormons breed buxom, virginal blonde chicks with very little attitude.

Godfrey: And the timing… Don't think I didn't realize that 12-16 hours later we would've been playing in hurricane run off and likely won a shutout. Or, then again, lost by 21 on consecutive fumbles into the end zone.

God, Allah, Yaweh, Etc.: Eh, you were fucked either way. The Ole Miss football team shitting the bed is as reliable as the US Postal Service with its "rain, sleet, snow" motto, only without the fiscal insolvency and sloth-like counter workers.

Godfrey: Hmm… so I should expect some sort of assault rifle vengeance the next time a 3L harasses the lady for dispensing barbeque nachos too slowly?

God, Allah, Yaweh, Etc.: The only thing a 3L should be doing is applying to some other graduate degree program for when he gets out of law school and his options include "hanging his own shingle" or turning glory hole tricks to help him pay off his student loans. But upon further thought, I'll concede that your concession workers move with the urgency of a death row inmate and the chances of your paying for that fancy stadium upgrade without a reversal of tort reform in Mississippi is zero. The colors are red and blue. Your best days are behind you. You cling to tradition and the old ways despite all evidence that new ideas are the way to go. You identity/mascot crisis is solved: 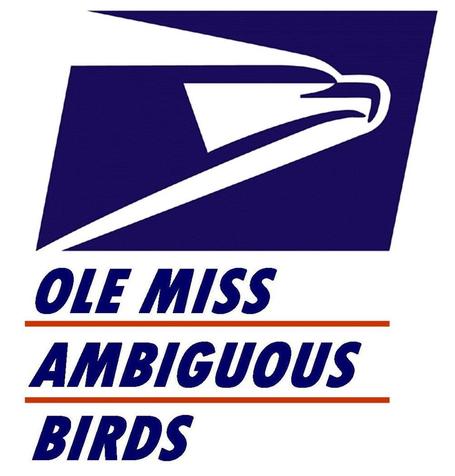 Godfrey: I can’t fault a bird of prey as woefully cliché, consider we’re the Bears now. I did like the move to boost Stoudt's stock with fans before anyone gets a chance to see Mackey take a relevant snap. This campus hasn't suffered a divisive split over racial lines in like, three weeks.

God, Allah, Yaweh, Etc.: If he were only from a small private school in the Greater Jackson Metro area then he could officially have received "Great White Hope" status. Corey Peterson can rest easy. For now.

Godfrey: We have to be the only school in a BCS conference that cheers our Jackson Academy bred "kickoff specialist" – he doesn’t even kick PATs – as loudly as a senior tailback during the pregame starting lineup announcement. There’s absolutely nothing WASPy to glean from that whatsoever.

God, Allah, Yaweh, Etc.: Bear with me, as I put my W.J. Cash hat on. By attaching themselves to the elite of a society, those of lower means get to feel uppity as well.  So the guy who lives in Madison, can't afford seats in the Rebel Club and is forced to send his kid to MRA, is able to feel as well-heeled as the asshole that sends his kid to JA and doesn't leave the air conditioning buffet line other than to see which D-lister is doing the Hotty Toddy each week.  It's the reason people in trailers watch Fox News and curse the "death tax".  It's the reason a place like Las Vegas exists.  It's the reason those people from Madison all buy shirts from Seaside.

Unfortunately for them, the link is a false economy because all those shirts really say is that you can use VBRO.com to find a place to rent for a week that you could never afford to own. But anyway, it's class warfare my man and that little kickoff specialist is a modern day General Stonewall Jackson who with every thunderous kick to the opponent's five yard line, is defending honor, mint juleps, state's rights, hoop skirts, poll taxes, Colonel Rebel, white women, and low taxes on capital gains.

Godfrey: I checked, and Oregon State went on the altar last week for the annual pagan FCS sacrifice. So now, exalted one, there's no need to get greedy and repeat history with Southern Illinois.

God, Allah, Yaweh, Etc.: I am cruel and spiteful and arbitrary. However, I'm really sorry, but I was exhausted last year for that season opener.  The Rebels' loss to Jacksonville State had way more to do with my misplacing my Ambien the night before and not being able to go sleep while the roommates were up playing Panic's entire catalog and smoking everything but a ficus tree.

God, Allah, Yaweh, Etc.: Oh? You didn't know Mohammed was a complete pothead did you? You thought jambandfanortaliban.blogspot.com was a coincidence? For shame.

Godfrey: I bet Lao Tzu’s a beast at "Halo." Not just because he’s Asian, but because he’s got that whole "mind like water" thing going. Has to benefit the frag count. This is probably racist.

God, Allah, Yaweh, Etc.: You bet your ass he's good at "Halo." Not so good at driving games though.

Godfrey: Besides, when Virginia Tech lost to JMU, the reverse happened - Frank Beamer's powers grew stronger than before, as he was able to harness the power of death and show the rest of the ACC their still beating hearts before darkness closed in. An Appalachian tech school gets a dark lord of special teams play, and we're still leasing Baptist circuit riders. Not fair.

God, Allah, Yaweh, Etc.: I also gave Beamer, a man perpetually photographed on a national state, a nipple-less tity on his neck. Is that fair?  I'm telling you, there is no logic with my will or how things play out. Feline leukemia? Complete accident.  I was actually trying to cure ovarian cancer.  That was a miss.  Those brownie pans that give you four corners on every single brownie? That was a slam dunk. I am omnipotent. I am omniscient. But I still fuck up on occasion. Fairness is something kids in kindergarten whine about. You're all just multi-cellular organisms floating on my celestial wave. Fairness is bullshit.

Godfrey: I expect some graduate level philosophical reasoning in derailing Brandon Bolden's campaign to break Deuce's rushing records. The guy's got a kid and a family back in Baton Rogue, and if Les Miles hadn't tried to make him a linebacker, he wouldn't have to suffer the curse of red and blue.

Godfrey: Abandoning the concept of fairness might be the best route there. That guy, had he swallowed some pride, could be on the fast track to a national title at LSU and still be camping with a few NFL teams come August. Damn that sin of free will. In closing my Lord, what's the magic points differential for Ole Miss to restore or even maintain what little blind faith this team has this weekend? 31-10? 42-0? Something involving gajillionty?

God, Allah, Yaweh, Etc.: It's also style this week. Nutt has to decide to embarrass the bastards.  You'll need complete and utter dominance on both sides of the ball. Think me destroying Sodom with thunderbolts. Think 450 plus yards and at least 4 first half touchdowns by the offense and more than 40 total points, no more than 300 yards and 20 points allowed by the defense, no special teams breakdowns, and no more broken bones or torn ligaments for the few remaining top tier, SEC quality starters you still have. Randall Mackey should do the pre-game Hotty Toddy without sounding like Mel Tillis. The Powe-Tron should show at least one breast with an erect nipple and no smaller than a C-cup popping out of a sorostitute's strapless dress as she shakes her pom pom. Of course it's all for naught once Vandy beats your ass next weekend in Nashville, but that should keep Nutt's "For Sale" sign in the garage another week or so.