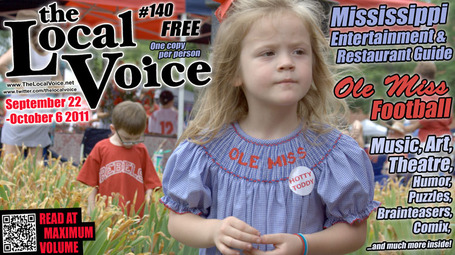 Rebel fans, it's that time again where, a few times every decade or so, we decide that the man at the helm of our football program ain't cutting the mustard for us and begin to look elsewhere for a suitable replacement.

If you don't at all know what I'm talking about, spend five minutes on any Ole Miss related blog or forum. Fans aren't happy with last week's defeat at the hands of the Vanderbilt Commodores, nor are they generally pleased with the direction of the program. It seems to us at the Cup that Houston Nutt's firing is nothing more than a formality at this point; he's a dead coach walking.

So, with that in mind, this column will be our take on who our next head coach should be. We aren't going to name names; we are just going to discuss a list of what we feel are ideal qualities for this job. We are going to do our best to really outline what we are looking for in a football coach, so we won't let this devolve into an "anybody but Houston Nutt" type of piece.

Our perfect head coach needs to be able to take the talent we can bring to the university and put them in a position to beat the superior talent other, bigger schools can attract. Wins against Alabama and LSU may be too much to expect on a recurring basis, but a scheme that isn't set up to simply match our talent versus theirs is the first step. If the next coach can effectively realize that our talent is not equal to that of Alabama's, perhaps he could devise a scheme to use the talent we do have more efficiently. That's the only way we'll be able to somewhat consistently beat teams that are "better" than we are.

Past the scheme of the head coach himself, he needs to be willing to serve as his own coordinator on one side of the ball. With the huge buyout away with which we're likely to be sending Nutt, we simply cannot afford to pay an offensive coordinator if our head coach is also an offensive-minded coach. The same works for defense.

Under this same umbrella, the coach must be willing to hire a coordinator on the other side of the ball and let him do his work. When Orgeron arrived, he forced every offensive coordinator to run the USC offense. There's a reason Orgeron coaches defensive linemen, and it's not because they have to make complex decisions on the field. If you think highly enough of someone to give him reign of half your football team, let him actually do that.

The state of Mississippi generally produces legitimate talent in the high school ranks. Sure, there's not enough to go around for Ole Miss, State, and Southern Miss, but we need to have a coach who is capable of bringing in the talent at the top. For Ole Miss to win, it cannot rely on Florida, Louisiana, and Texas' players. Sure, those states have some talent, but the backbone of the team must come from within the state of Mississippi with players who want to win for the Magnolia State.

This means that the head coach needs to bring in coaches who relate to the recruits well and make them feel comfortable. A recent trend that must stop is allowing half of the staff to spend little if any time on recruiting. Recruiting is the lifeblood of a program and, without it, you cannot succeed in the Southeastern conference.

Also, the perfect head coach is able to take the raw talent we bring in and then develop a player who doesn't constantly make glaring mistakes and progresses throughout four years.

Being able to occasionally beat a team ranked higher than us is a great gift. Being able to not lose to teams considered to be inferior to us is more important. Sure, Ole Miss isn't going to make it to Atlanta without beating a few teams with superior talent, but if we can simply win the games we're supposed to win, we can build towards a goal of Atlanta slowly. This 4 win, 3 win, 9 win, 9 win, 4 win crap has got to stop. Think of Ole Miss in the late 90's and early 2000's; that's what we'll need to see as far as results.

He needs to be above subtle jabs at Mississippi State. We're better than that, and we know it. He needs to bring an excitement to the program which hasn't been seen since Eli Manning was under center. He needs to want to see Ole Miss win insomuch that his very sense of self worth hinges on it. He needs to be dynamic and understand what it is that makes Ole Miss what it is in order to truly rally fan and player support.

But, most importantly, he needs to get his team prepared to win some damned football games...

Whoops. I guess this did devolve into an "anybody but Houston Nutt" type of column afterall. Oh well.