I'm Pretty Much Over This

Share All sharing options for: I'm Pretty Much Over This

[ED: A proper game recap is coming, if you can stomach it.]

To be entirely honest, I did not expect a Rebel victory today. I wanted one, but given our history of getting off to a poor start in SEC play, but wasn't something I could even allow myself to expect.

Of course, I also didn't expect to see what we just saw - an absolute rout of our Rebels, who were underwhelming, listless, and embarrassingly "prepared" for this SEC matchup.

I know there are a lot of emotions people are feeling right now. Vanderbilt fans are, naturally, thrilled. Mississippi State fans, a few days removed of their own football-related meltdown, are undeniably under the influence of euphoric Schadenfreude. A bevy of Ole Miss fans are surely gripped by the frustrations and anger we fans feel after a tough loss. 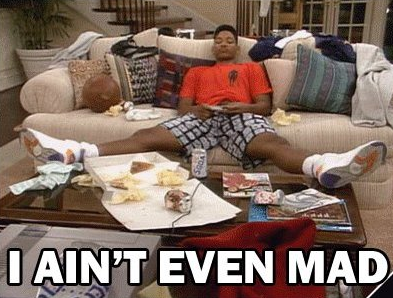 I mean that. I'm not angry, nor despondent, nor all that fired up. I'm not even disappointed. I'm just tired and a little annoyed.

Initially, I assumed that this is the product of my, for the first time in a very long time, endurance of an entire Ole Miss game without a single drop of anything to drink aside from water. But I doubt that even my own sobriety can preclude my passion for the special, dysfunctional brand of college football we play in Oxford, Mississippi.

No, this feeling of exhaustion and apathy is my form of acceptance. I accept this program, as it stands today, for what it is. This football team just is not good. Of course they are athletic and, in spots, quite talented, but they're still not good. They're woefully undercoached, don't have the swagger of the past few seasons, and simply are not being put in positions to succeed. Unless I see something dramatic which gives me cause to think otherwise, I have little hope for the nine games remaining on this schedule.

I still love Ole Miss. I always will. I love the Lyceum, the Grove, and Ventress Hall. I love red and blue. I love undeserved pretention. I love the friends I made during my undergraduate years. I love the professors I had and am truly thankful that Ole Miss had the foresight to hire people who can put up with me. I love RedCupRebellion.com and all of the opportunities I have afforded myself as a contributor to this site. I love Oxford. I love Thacker Mountain Radio. I love City Grocery. I love Square Books. I love whatever it is that makes us us.

I just don't love Ole Miss football right now. I'll still watch and write about the games, and I might even make it down to the Grove a few times this fall. But I can't see additional wins or losses having any real effect on my current state of mind.

We were just downright outcoached, outplayed, and outhustled by Vanderbilt. They beat us the way that we should be beating FCS teams, and we didn't even seem to give a damn while the whole episode was going down. But the worst thing about it is that, once the clocks hit 00:00 and I began to think about what I would write in this space, I realized that it is going to take me an entire season to shake this feeling. It is going to take some very significant changes to jump start my true, fiery Rebel fandom, and I think you know exactly what I mean to suggest by that.