Hey God, It's Me, Godfrey: The Vanderbilt Game

Share All sharing options for: Hey God, It's Me, Godfrey: The Vanderbilt Game

Every week during the college football season, noted Ole Miss fan Steven Godfrey opens a dialogue with his namesake: "God, Allah, Yaweh, Etc.," creator of all being, to discuss the meaningful and superflous alike. Sometimes they just trade recipes and enjoy the silences between conversations.

Godfrey: What with your omniscience, I assume you're abreast of all this political maneuvering with the mascot, right? It's nice to see the Citizen's Council is still operable.

God, Allah, Yaweh, Etc.: I am also aware of the magnificence of lemon bundt cake and whether or not Gisele shaves it bare. I know that privately, Coach Giggity rolls his eyes like a high school cheerleader anytime he hears the name "Malzahn". I know that Brandon Bolden's ankle injury was the result of an overwhelmingly verbose prayer request by Mitt Romney. And yes...Of course I knew that the Citizen's Council was still active. The Beacon will serve sweet tea and rip down that garishly tacky anachronistic Confederate wallpaper before angry white Mississippians stop re-fighting Antietam via the ballot box.

Godfrey: I assume that while you don't deal in shades of karma, Mississippi State fans rallying to sign a pro-Colonel petition to theoretically aid in their own recruiting are due some sort of righteous smiting, eh?

G. A. Y., Etc: Yes. Of course.  And last evening, in front of a national television audience, an angel by the name ofBarkevious Mingo swung the sword of righteousness. 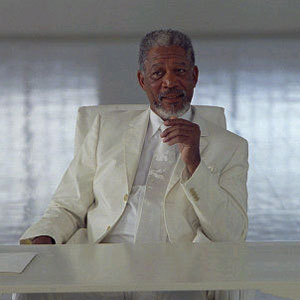 Who else would you expect? This is Mississippi.

Godfrey: There's a gentle reminder, something like an "All God's Creatures..." where we Southerners would normally say "Bless their heart" in reference to Mississippi State. Fans who would actively campaign to keep Ole Miss very, very nationally known exploits with racism and offensive imagery all to theoretically gain some kind of advantage in recruiting. As if your average 4 star defensive back in Apopka, Florida, or copy editor at USA Today knows the difference between the two schools.

G.A.Y., Etc.: Based on last night's performance, I wouldn't be worried so much about their heart, but their ass.  Their defense crawled up inside that thing and spray painted in purple and gold, "Les was here" and left a bunch of corn dog sticks and some empty Keystone Light cans too.

Godfrey: I am, however, totally fine with a MSU inspired boycott of any and all terrible mainstream films associated with racial strife related to Ole Miss. "A Time To Kill," "The Help," "The Blind Side" - this we've gone unpunished for. You played coy last week about the absence of fairness in life and football injuries, yet - LAZARUS WALKS! - Brandon Bolden seems to have risen from the IR dead.

G.A.Y., Etc.: Like I said...Mitt asked for the injury, and  I gave it to him.  Mitt has some serious equity with me. Remember that scene in Pulp Fiction, when the Wolf got Jules and Vince's ass out the whole "you shot Marvin in the face" fiasco?  Mitt's a fixer. If there's ever a dead hooker in your hotel suite, and your first call isn't to Mitt Romney, then you get what you deserve. Anyway, Mitt backed off the Bolden deal when he realized he'd need my assistance to beat Rick Perry and his amazingly beautiful haircut. He's now praying for forest fires in Texas. And as you well know, a burning bush is one of my oldest tricks.

Godfrey: Tell me how close I am: I feel like, given the smug satisfaction among our fans after Mullen's implosion, we'll go up in a 14 points-ish fashion before a Zack Stoudt pick six, a three and out, and some bizarre string of screen passes (responding to Tyrone Nix's patented brand of small dick compensation blitz schemes) will tie the game. We lose by a field goal or two in the fourth.

Godfrey: There's certainly something analogous between the August faith of our fans and WASPs celebrating the spicy flavor of the free range chicken in their 2000 calorie burrito bowl. Sports Illustrated called Vanderbilt the "only SEC team everyone can like." My assumption is that this has something to do with their sanctimonious elimination of the athletic department structure, or maybe  that's just wishful thinking on the part of Yankee journalists with a wet dream for the day every SEC team is a perpetually hapless 2-10.

G.A.Y., Etc: Commodore alums Clay Travis and Buster Olney will have a cocaine and Hennessy fueled orgy with the Hilton sisters and the Olsen twins on stage at the Ryman before Vanderbilt football matters. There is just so much arrogance I will allow one population of people to have. For now, Vandy alums will just have to settle for having a degree that won't be roundly mocked if it comes across a hiring manager's desk north of the Mason-Dixon line, and  routinely beating the hell out of the sixth worst football program in the best division in the best conference in the country.

Godfrey: It seems, aside from the whole "don't wrap yourself in the visage of the Civil War" thing, Vandy's been able to dodge the karma of white sins past by welcoming a horde of self-serving, condescending northeastern assholes onto their Nashville campus as students and teachers, theoretically to buffer themselves from any potential criticism from other self-serving, condescending northeastern assholes. So let's buy some Ole Miss billboards in Vermont! Amirite?

G.A.Y., Etc: So in addition to the tanned lithe bodies of dim-witted future Tri-Delts whose academic deficiencies and snobbish attitudes prompt them to opt out of Sam Houston State and Valdosta State as higher education options so that they can attend a school with like, you know, real sororities and stuff, you want a bunch of unwashed, pale-faced, fleece-clad, non-pube shaving, one-piece bathing suit wearing New Englanders to invade Oxford?  Haven't you suffered enough by siphoning off some nasty book readers from Millsaps every now and then with the Honors College? No, dumbass. Put a billboard in Budapest and be done with it.