[ED: This is not on the front page because I didn't find it appropriate to push the coverage of the Vandy game around. If you need to find this, I'll have it fanshot.]

I have a borderline unhealthy fascination with college football. Yes, I'm an Ole Miss fan and alumnus and, yes, I'm a dumb SEC homer, but I can watch damned near any game involving any two schools, even if there isn't even a modicum of anything on the line. "Akron's kicking off against Memphis at 2:30? Fire up the DVR!" It's strange, it's obsessive, it's maybe even a bit compulsive, but I'll be damned if it isn't a great way for me to spend my Autumn afternoons and evenings.

Having moved from Oxford, Mississippi to the grouchy, traffic-chocked confines of the Capital Beltway three years ago, I have not been fortunate enough to see many Ole Miss football games in person. I did watch the Rebels earn an Egg Bowl win via sodomy and arson a 45-0 victory; I saw Les Miles' epic clock mismanagement live and in the flesh; I took part of the first Cotton Bowl in Jerry World; but I've still missed a lot.

Granted, a lot of what I've missed has been bad, but it has been missed nonetheless. This has given me both cause and gumption to break out of my Rebel comfort zone and, by golly, go to an actual college football game on occasion, regardless of who is playing. Last season, I took advantage of two BCS Title contendors meeting in week one at - ahem - beautiful FedEx Field in Landover, Maryland as Virginia Tech took on the Broncos of Boise State. (I totally meant to share that with you all via photo essay and then promptly forgot.) This season, the budding tradition of my visits to non-SEC football venues and events continued, as I made the road trip to Ann Arbor, Michigan to watch the Michigan Wolverines and Notre Dame Fighting Drunk Papists With Silly Hats battle in the Big House.

This wasn't a tough decision to make. Two teams I've never seen? Check. These teams are rivals? Check. The largest stadium in America? Check. The first time a night game will have ever been played in said stadium? Check. Free place to stay and a local to show me what to eat and drink? Check and check. Ole Miss is playing some bullshit team that we'll beat, but not handily so, causing the gnashing of teeth and wringing of hands amongst the Rebel faithful? Check.

So off I went. To Meecheegan. 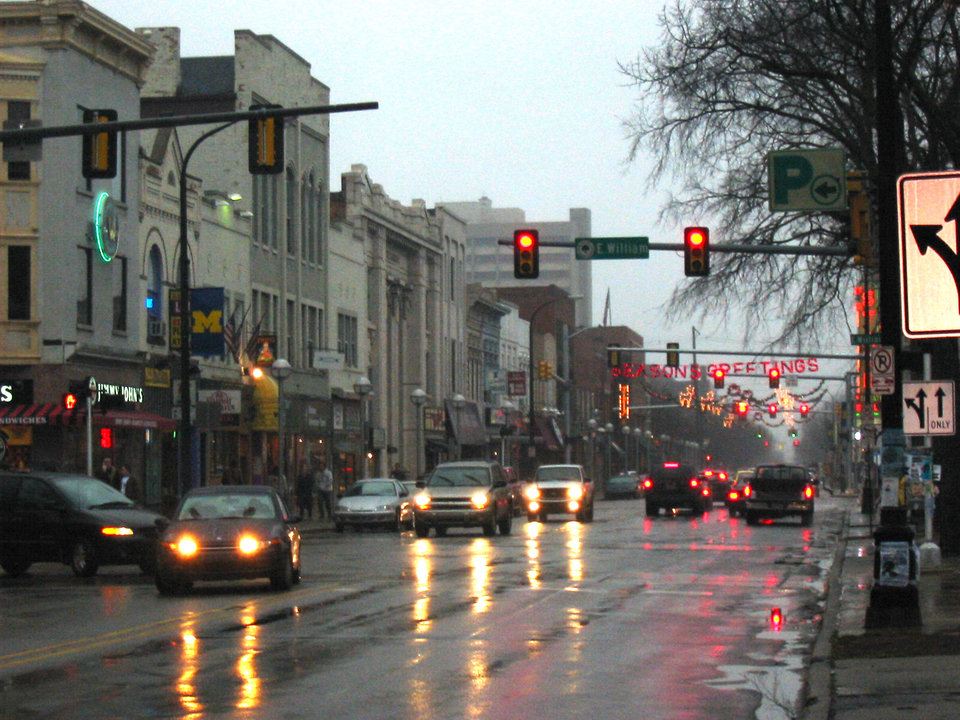 So I obviously didn't take this picture, but I also didn't really take many pictures of the town itself. We were more or less dropped off by our ride right on this street at this location. I had bags and stuff in my hands and was, frankly, too damned thirsty to worry about photography.

Regardless, this is what the town looks like. To compare it to something in the SEC, I'll say it reminded me of Athens in that the Campus and the downtown area back right up onto each other. Ann Arbor, though, has more than one cluster of bars and restaurants, all of which which sorta straddle the campus in different directions. I thought that was neat. What you see on the left in this photo are some bars and restaurants (one of which is Ashleys, which has an excellent tap selection), and what's on the right is the campus. You can literally walk out of a classroom and be sitting atop a barstool in, oh, two minutes, depending on your origin and destination.

In those respects, it's very different from Oxford. Whereas we have very clear boundaries separating the town from the school, Ann Arbor and the University of Michigan don't. I could see how people could enjoy that, just as I could also see how some people might not. Diff'rent strokes I suppose. 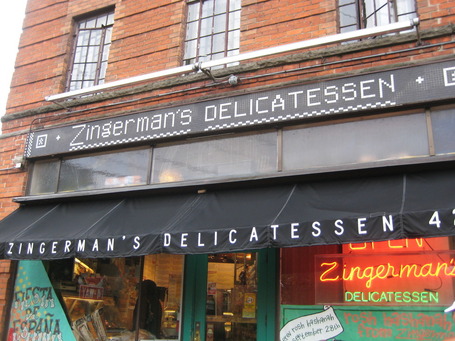 One thing that Oxford and Ann Arbor do have in common are James Beard Award winning dining establishments. Zingerman's Deli is considered by many to be one of the best delicatessens in the United States. 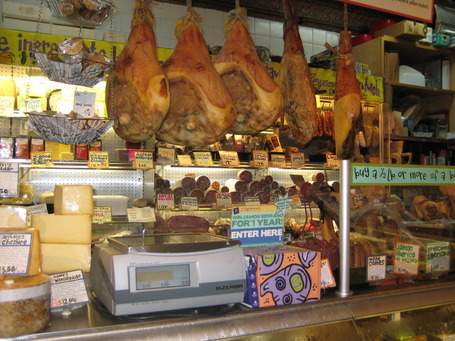 As a sucker for cured meats, I loved the place. It is exactly what you would want out of a local deli in that, if they can make it fresh, they do. If they can't (or if they know someone who does it better than they do) they'll order it. They have cheeses, breads, meats, and all other sorts of foods from every corner of the globe. We were there for breakfast, so I got a lox bagel. It was great. 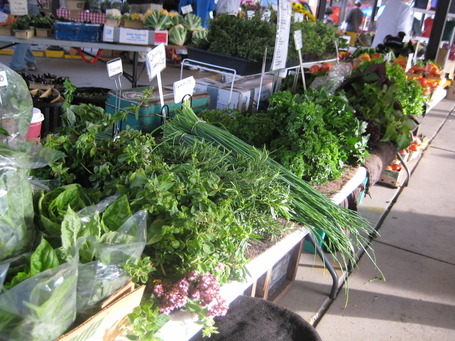 We then went to a farmers market. We bought herbs. This is how adults spend their Saturday mornings. Deal with it. 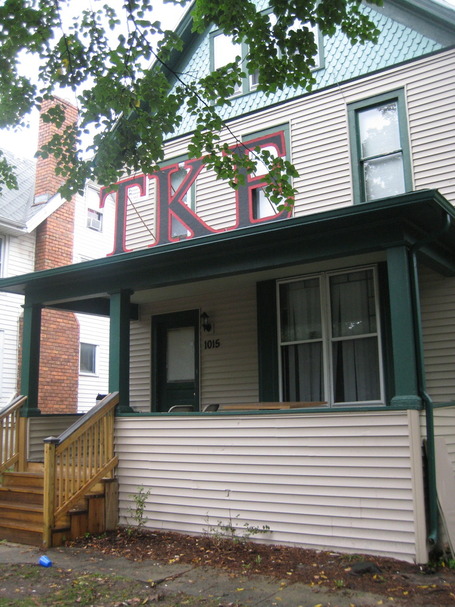 This is what fraternity houses look like in Ann Arbor. To be fair, there were some larger, architecturally interesting houses, but they certainly aren't the immaculately groomed, palatial, white-columned, red brick buildings we at Ole Miss are used to. 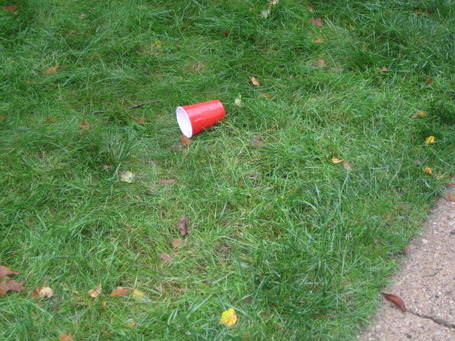 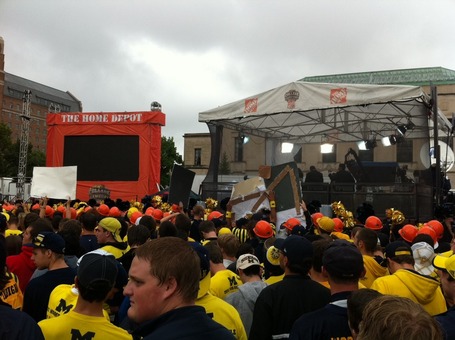 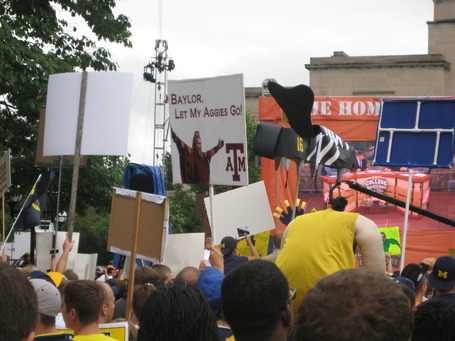 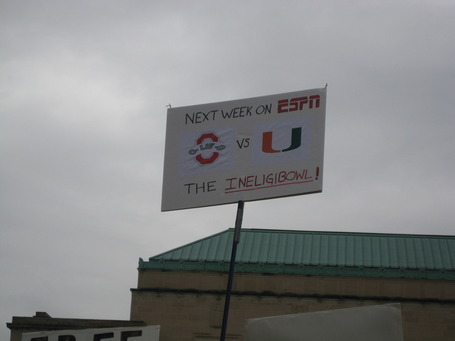 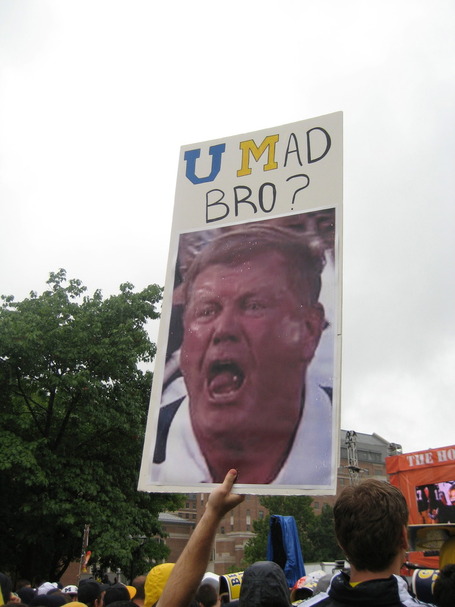 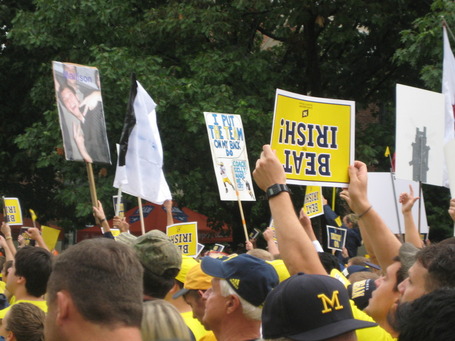 You might not be able to make it out from this distance and angle, but there's a "HE PUT DA TEAM ON HIS BACK THO" reference on that sign in the middle. If you don't get it, get with it. 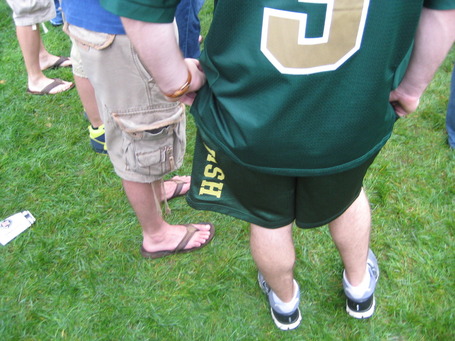 Notre Dame bros dress like they're in middle school.

To be fair, most bros who grew up north of Louisville dress like middle schoolers to we Southern folk. Short shorts and button ups don't hit these kids until they're in law school. 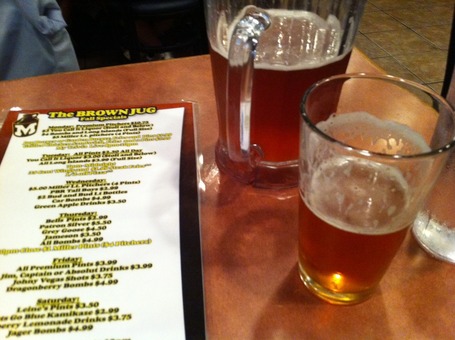 Bells Two Hearted Ale. Michigan has a bevy of great breweries, and in a place like Ann Arbor most of them are on tap. This stuff you can get in DC for about six or seven bucks a bottle at the bar. At the Brown Jug, your sort of quintessential college town sports bar, it was $14 a pitcher. It was the best pre-tailgating post-College Gameday beer I've had. 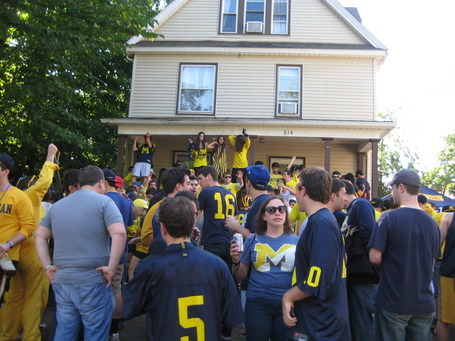 This is what tailgating looks like at Michigan. Right by the stadium there is the typical "park the RV and pop up the tent" type of tailgating, but in the neighborhoods within walking distance of the stadium, there are house parties every fifty yards or so. This is, perhaps, the polar opposite of the Grove. 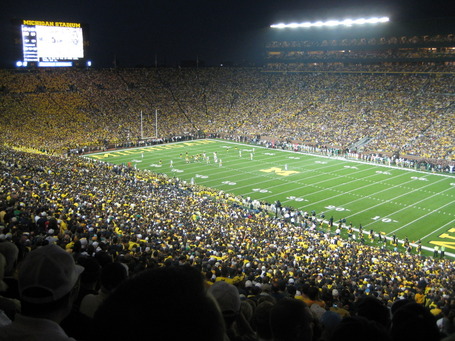 The view from our seats. We were high up, but we could see everything well enough. 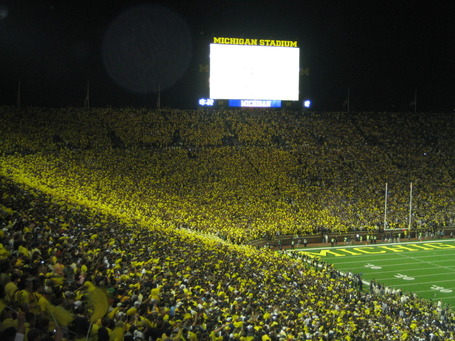 If you watched the game on television, you saw the yellow pom poms (shakers, whatever) out in full force. The thicker bunch of yellow there is the student section. I've always thought our use of pom poms has been sorta half-assed, at best, so to see theirs done so well was a sight to see. I know, that sounds dumb, commenting on how awesome pom poms look and all, but it really was something to behold. YAY POM POMS! 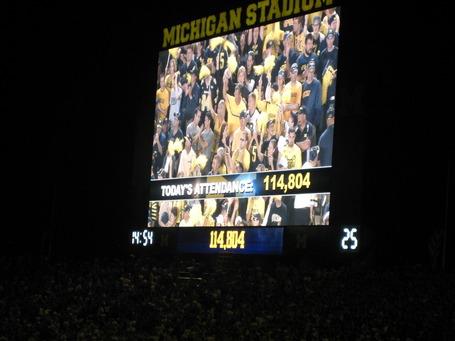 Aside from being an incredibly exciting football game punctuated by a tense, high-flying fourth quarter which featured the Wolverines coming back from a 17-point deficit on the back of Denard Robinson's heroics, this number made the trip itself worth it. 114,804 is the largest attendance number ever recorded in the history of NCAA football. I'm sure that, in time, that record will be broken, but until that happens I will be able to proudly boast that I was a part of the largest crowd to ever watch a college football game. That's cool, dammit.

Regardless of who was playing, the fourth quarter of that ballgame was undeniably the greatest fourth quarter I've ever watched. Ever. Ever ever. Watching Denard Robinson, who is the real life version of the EA Sports "scramble around and huck it deep to an open receiver" offense is truly a treat to watch in person. Not only is he a freakish athlete who is clearly having fun out there, but he is a consummate winner. People can critique his decision making, accuracy, and size all they'd like, and that's fine; they still can't deny that the guy just knows how to move the football and win.

It was an incredible day-and-a-half in Ann Arbor. I, naturally, would have liked to have done more, seen more, eaten more, and drank more, but there's only so much time in a weekend, money in my checking account, and space in my GI tract. I'll be heading back sometime in the near future, and fully anticipate on enjoying it as much all over again.