Hey God, It's Me, Godfrey: The BYU Game

Share All sharing options for: Hey God, It's Me, Godfrey: The BYU Game

Every week during the college football season, noted Ole Miss fan Steven Godfrey opens a dialogue with his namesake: "God, Allah, Yaweh, Etc.," creator of all being, to discuss the meaningful and superflous alike. That's a lie. God just prefers a solid set-up to respond "That's what she said!" 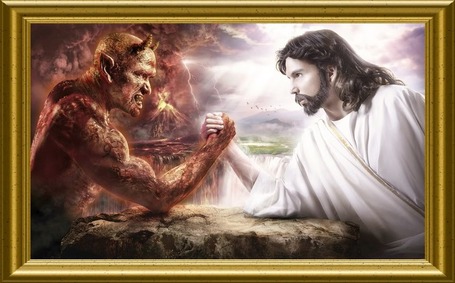 Godfrey: Dearest Supernatural Being, remember when we Rebels over indulged in flashing the "elite-of-the-conference" credentials with a 7-1 SEC record in '03, and everyone was all like "Whatever, you'll suck until Eli has a son," and we were all like "WHATEV, JUST WAIT TILL MICHAEL SPURLOCK!" and then, we've like, used transfer quarterbacks for the last seven years? If it has any bearing on this or any future season's stability behind center, I'm sorry about being tacky.

God, Allah, Yaweh, Etc.: Have you never watched one of those documentaries about the noble farmer who wins $110 million via the Power Ball, and then three years later is a meth addict bemoaning the tragic golf cart accident that killed his wife? You can’t change a leopard’s spots. Ole Miss is resigned to football mediocrity punctuated by near misses at glory, a la 2003, and troughs of incompetence with which only a Memphis City Council meeting can compare. I’ll say this; Orgeron was obviously your rock bottom. Houston Nutt is the self-help guru who came in and got you to remember to wipe your ass after you shit. Who knows what’s next, but what you can bank on, is that inconsistency will be the hallmark.

Godfrey: With that predictable unpredictability in mind... Donte Moncrief, Nick Brassell, Tobias Singleton... we landed far too many receivers with recruiting acclaim. So who is the mediocre also-ran that fails to live up to the hype, who quits the team before February and ends up running a basketball camp at Provine High School for the rest of his life, and who performs admirably given the lack of surrounding talent and becomes a Pro Bowler once he's gone?

God, Allah, Yaweh, Etc.: I’m good at lots of stuff, but determining which 18-year-old kid realizes his full potential is still pretty difficult. Case in point, Trey Freyfogle. Who could have possibly guessed that a kid from George County in South Mississippi who runs like a Jamaican sprinter, has tattoos, and likes his beats chopped and screwed would end up getting the boot for smoking weed all the time? Ok, that’s a bad example, but I’m sure you get my point.

Godfrey: Not to veer into heresy, but Tyrone Nix and his weakness to the  zone read seems awfully pagan in its metaphoric similarities to heroes of Greek mythology. Or is this merely a pending miracle of yours, to be assisted by Barrett Trotter?

God, Allah, Yaweh, Etc.: Barrett Trotter replacing Cam Newton would be like if Aaron Spelling and the braintrust at "Beverly Hills, 90210" had replaced Tiffani Amber-Thiessen with that big nose chick that played Blossom. This will end as poorly for Gene Chizik as Brandon Walsh’s three team NBA teaser.

Godfrey: I'll take that as a yes on the pending redemption. Off the field, does a lagging economy following a certified recession somehow accelerate the marriage market for the MRS degree contingency in Oxford? Do they adjust to the market - say, diversify towards upside investments like MIS majors who lack certain social graces? Surely the glut of law school applicants has lessened some of the sizzle in that standard of Burgundy Room flirtations.

Godfrey: You're a patron of stereotypes, by the way. Two years at the same bowl in Dallas, two years worth of un-ironic claims to Westin bar tab records and Highland Park shopping sprees by Ole Miss alumnae. State goes to a bowl for the first time since email, and you put them in Jacksonville. I see what you're doing.

God, Allah, Yaweh, Etc.: It was really more for the humor element than anything else. Jacksonville is practically Prague to your average Rankin County MSU alum. Watching a maroon Nissan minivan continue to miss the exit to the Comfort Inn over and over and over again while a mental soundtrack of circus music plays in the background is my own private "Curb Your Enthusiasm." Also, don’t forget that I put the Smoot-era Bulldogs in Dallas, albeit for similar reasons. A Bulldog fan clad in a Jerzeez maroon sweatshirt and Wranglers proclaiming multi-syllabic "gahhhhhhhhh-leee" when he looked at the price of a wallet at Neiman Marcus is really side-splitting humor.

Godfrey: What ingredients could we possibly be missing to conjure up a egomaniacal billionaire booster? Surely if Oklahoma State can breed a devourer of worlds, our WASP factory can cough up a go-to curmudgeon capable of disappearing athletic directors.

God, Allah, Yaweh, Etc.: As soon as Coahoma County has more natural gas wells than juke joints. There are lots of Ole Miss alums that go on to fame and fortune. The problem is that the vast majority of them are the ones smart enough to get the fuck out of Mississippi if they ever want to make a buck. Unless they want to sue people, but we’ve seen how that little morality tale plays out.

Godfrey: It's gonna take more than a black bear, isn't it? Let's timeline out just how much of a racism induced curse we're carrying. My grandkids won't see the Redskins win their next title, so hopefully we're notch above the actual nickname conjuring up a slur.

God, Allah, Yaweh, Etc.: Grandkids? I thought I’d put a cease and desist order on the motility of your sperm cells. And yes, Dan Snyder is punishment for having a racial slur as a mascot much in the same way Ethan Flatt is punishment for that "The South Will Rise Again" bullshit. The only way you break the curse is to sacrifice a Vineyard Vines clad Phi Delt from the Delta at the fifty yard line. Until then, your Ole Miss’s dillusions of football grandeur will be as amiss as the Mormon’s belief that I’d send my kid on a post-college backbacking trip through Navajo country.

Godfrey: Those Mormons have certainly been able to operate in the national consiousness with nary a bit of racial watchdoggery attached to their practices. Granted, they're routinely humiliated for their religious principles, but never called racist. By comparison, where did the Southern Baptist Convention go wrong? It was the slaves thing, wasn't it?

God, Allah, Yaweh, Etc.: For the better part of two centuries, nobody gave a flying fuck about Mormons because they only lived in Utah. It wasn’t until they began leading the push for mandatory bicycle helmets and knocking on your front door that people realized how fucking weird they are. But the biggest reason is the lack of hypocrisy. Say what you will about Mormons, but at least there are no jokes about Mormons in a liquor store or not being able to take just one Mormon fishing with you. Their beliefs about me and my kid are as fucked up as Rob Evans’s wife’s check book, but what they say the believe, actually appears to be what they believe. People hate hypocrites. Most non-Baptists hate Baptists. I don’t think those two previous sentences are unrelated.

Godfrey: Given the alarming rise in those big box, denomination free McChurches in Rankin County touting fundamentalism with overhead projectors and electric guitars combined the growing concern among Rebel fans that Arkansas' sidewalk alumni might - might - have been right in predicting what Houston Nutt would do to our program, the rapture will emminate from a strip mall in Springdale, Arkansas, won't it?

God, Allah, Yaweh, Etc.: You missed the rapture. I accidentally pulled the trigger on that mofo back in 2010, right before Memorial Day weekend. Oddly enough, the only guy that made it was Gary Coleman. The rest of y’all are set to endure some sick ass shit at some point in the next few years, but I don’t have the time or inclination to start that project until I smite every Phish fan on the planet.Trey Anastasio et al are more annoying than a stripper that wants to show you pictures of her kid. Fear not though, I’ve got big blizzard plans for this winter.