The Rebel coaches released a miniature depth chart for the season opener today. I personally am quite confused by it. I put the two deep into an excel sheet and organized by class. There were a few players listed on the depth chart outside of the two deep, and I'll pay them a little bit of lip service in the explanation after the jump. 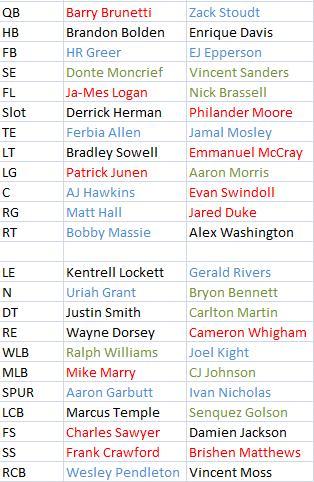 Analysis after the jump.

As of right now, there are nine freshmen on the two deep. Two of them are starting, while Nick Brassell drew consideration with an "or" between his name and Logan's. Having seven freshmen listed as primary backups is incredibly alarming. I know we just signed a good class, but our football team was not good last year. All we're saying by placing these freshmen at second in many of these races is that they're good but not quite as good as a lot of players who helped us lose eight games last year. I'm not advocating for starting more freshmen. I'm just giving perspective.

Things that stick out to me: