When speaking of the BYU Cougars and their chances against our Ole Miss Rebels, people are quick to talk about sophomore Cougar quarterback Jake Heaps and what he means to that offense. Amongst Rebel fans, the two camps of the discussion tend to be that:

Heaps has been hyped as the next great BYU QB since the day he committed. He was ranked as the #1 pro style passer in the country by Rivals.com and the #63 player overall coming out of high school, so it's not as if this hype has come from nowhere. Heaps quickly earned a starting role for BYU as a true freshman and did well, throwing for 2,316 yards with 15 TDs and 9 INTs last season.

But how good is he? Is he just a product of his schedule? This is what I'm going to attempt to answer. To do this, we're going to look at his passing statistics game by game from this past season. As I see it, it's important to look at the teams against whom he played well, just as it is important (since he was a freshman) to consider when in the season he played his best.

Check the chart below. The Air Force stats aren't actually zeros across the board. Nothing against Air Force; they had the #2 pass defense in the country this past season. It's just that Heaps played so few snaps against the Falcons that his numbers there were largely negligible. 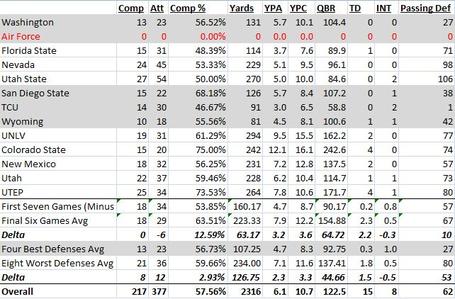 So Heaps performed much better at the end of the year than he did in the beginning. He also faced five of the worst eight defenses on BYU's schedule during that time span. As you can see, when Heaps faced good defenses, he threw only 0.3 touchdowns per game along with one interception per game. When he played poor defenses, that flipped to a 1.8:0.5 ratio. Also, Heaps' yards per attempt against good defenses were a terrible 4.7. That's absolutely horrendous, as in "I think Ethan Flatt put up better numbers" horrendous. When he faced poor defenses, he jumped to a very respectable 7.1 yards per attempt. In short, he struggled against good defenses while succeeding (somewhat) against the lesser teams (not that Florida State was a lesser team).

Of course this isn't a startling outcome, but the differences in his performances are pretty stark. Let's look at his passer rating as it varies amongst four categories of games: His first seven games (minus Air Force), his final six games, his four best opposing defenses, and his eight worst opposing defenses. 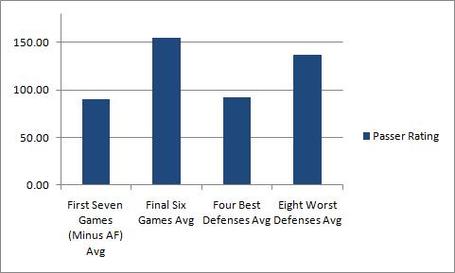 His passer ratings obviously reflect some struggle against competition, but let's take a look at a different aspect of his passer rating- namely how he did throughout the year when facing somewhat equal opponents. 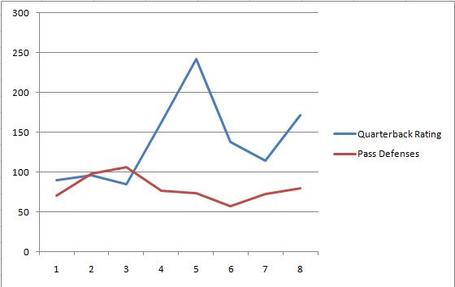 That says "pass defenses," and that's how they rated in terms of performance amongst FBS level football teams. The scale is, naturally, gonna be a bit skewed, but just look at that graph as a general trend line of defenses faced. As you can see, through the year, Heaps actually played better against (statistically) better pass defenses.

Remember, because the pass defense number I've chosen is ranking, a lower number means a better team. Let me point out that I understand there is a flaw in this argument. Florida State may have had a pass defense ranked similarly to UTEP, but it's tough to argue that Florida State's defense wasn't actually better than UTEP's. They are products of circumstance. Still, I think that with a large sample size, you can see that the outliers are overcome by the mean.

So we can see that, when considering similarly ranked defenses through the year, Heaps played better as the year progressed. From this, we can extrapolate that Heaps probably improved a great deal as the year went on even if he was facing lesser defenses as a whole towards the end of his freshman season.

"But Juco, why are you looking at bad defenses? BYU didn't play against an SEC opponent last year. We're big, bad, and are equipped with chainsaw penii [Throwback HT: EDSBS]." Well, Ole Miss ranked 103rd in the country in pass defense last year. While we will almost certainly be improved, we're not going to be in the top 40 or anything of the sort. Hell, we might not be in the top 70. Essentially, what researching for this article taught me is that Heaps will play well against our defense, but I'm not sure I expect him to pass for 300+ yards against us. For all the grief I give the defense, this probably won't be the game where he meets that career milestone for the first time. We simply have too much speed to allow that (hopefully), and BYU's offense is balanced enough to give us trouble in all facets of the game as it is.