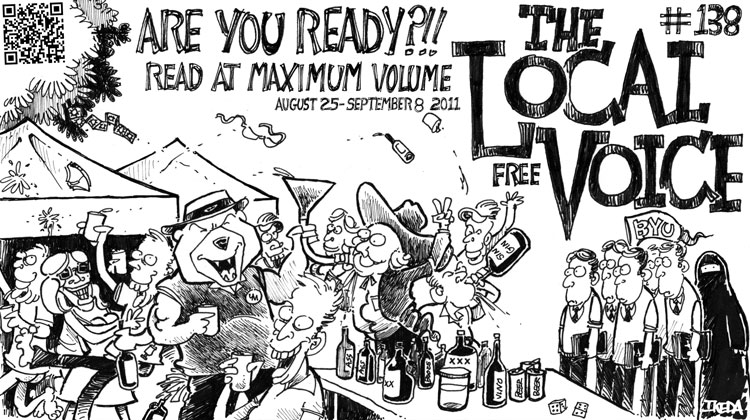 As is typical for the various publications in and about Lafayette County, Mississippi, we dedicate this space of ours this biweek to welcome the incoming Ole Miss freshman class. You've got an exciting one to seven-and-a-half years of Ole Miss studenthood in front of you, and we at Red Cup Rebellion wish you all of the best in your academic endeavors and alcoholic indulgences.

Now, being as how we are all graduates of your alma mater to be - and, no, you can't call it that until you graduate - we would love nothing more than to impart a few bits and pieces of advice for you, the new Rebel fan. We've seen a lot, and followed these teams all across the country, dedicating a lot of our time, money, emotions, brain cells and liver function to the self-destructive practice of collegiate athletics support. Trust us, we know what we're talking about here.

First, if you're a freshman, please refrain from even using the word "tradition" because, remember, you've been here a week. You probably think Rebel Run is a time-honored tradition. "Wait, it's not?" you're thinking, to which we would reply, "Exactly." You might have seen or heard some grumblings about a new mascot which will first step foot in Vaught-Hemingway Stadium, just as you will, this football season. We don't give a damn if you like the bear or not. Nobody does, except for a few loud, very annoying people. It is your mascot. You do not have another one. Claiming Colonel Reb as "your" mascot is about as valid as me claiming Walter Mondale as my presidential candidate? Don't get the reference? Yeah, it's because it happened before you were born.

The last time Colonel Reb was on the sidelines, you hadn't yet hit puberty. Suck it up and enjoy the antics of the goofy, foam-headed bear. That's what it's there for.

The Grove is a place you go to see and be seen. Don't be seen wearing a purple suit. Also, don't be seen being "that guy" or "that girl" in anybody's tailgate. The behavior of "that" guy/girl generally includes, but is hardly limited to screaming, peeing in inappropriate places, eating food off of other people's plates, spitting on yourself, and being a general ass.

If you don't like fried chicken tenders, then you're in the wrong place. I would wager that more chickens die to end up on the menu somewhere in Oxford, Mississippi than anywhere else in the continental United States. Even the gas stations carry fried chicken here.

Yes, this is a party school. So party, that's fine. Just remember, half of the people in the Grove know your mother, and aren't afraid to tell her what kind of silliness you've been up to.

Roughly an hour and a half before the game, the band will play a rousing little concert beside the Grove stage. Go to that. After it's over, refresh your drink and then proceed immediately to the stadium. This schedule provides maximum the maximum combination of libation and school spirit. Seriously, do this. Don't linger in the Grove to chase your lame friends around. If you've got a ticket, go to the game from kickoff to quadruple zeros on the clock.

Only wear sunglasses if it's sunny. If not, people will know you're either trying to hide some drunken eyes or you're ogling women. If you don't mind people assuming illicit behavior on your part, then wear sunglasses whenever you damn well please.

You hate Mississippi State. They're everything you're not, and that's more-or-less by design. Don't even question this. Don't even try the whole "well you know I have friends at State deal," because we all do. You hate Starkville and know - not "think" - that Oxford is a better place. You find maroon to be as aesthetically unpleasant as any color imaginable. You think the bulldog is a sissy dog which can't walk fifteen paces without panting, flopping over, and farting on itself. You think Houston Nutt is a lovable goofball, while sneering at Dan Mullen for being an annoying goofball. You do. Not. Like. Them. And you act accordingly.

LSU, well, you know that they're culturally bizarre, marble-mouthed goons who would batter and fry tire scraps (and probably make them taste incredible) if push came to shove. You know that they're a generally vile people, in an oddly loveable way. And you know that you want to win every time we face them. But the relationship there is different. There's an odd mutual respect involved. Keep that in mind.

Being an Ole Miss fan is unlike being a fan of any other team. The Chicago Cubs' misery is limited to one sport, the Saints have had their title. Always remember that we will usually be just good enough to warrant optimism but bad enough to usually be let down. Being an Ole Miss fan is a little like a disease and a lot like being in love with a crazy person. She'll frustrate you, sadden you, and disappoint you, but those few moments of success make the heartbreak worthwhile.

Also, there is usually alcohol involved.

Finally, bookmark RedCupRebellion.com. Thanks in advance. Welcome to Oxford, get out of my way, and Hotty Toddy.