Yesterday, I tweeted and Facebooked an open-ended question to followers of the Cup: which newcomer are you most excited to see this fall? I received enough responses to make a nifty pie chart, but not enough for such a poll to count as anywhere near scientific. This shouldn't be taken for anything more than it's face value. 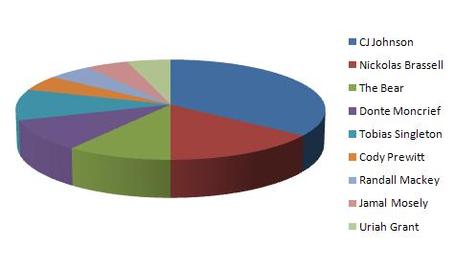 CJ Johnson, naturally, won the poll. Nickolas Brassell, either as a wide receiver or defensive back, earned the second highest number of votes. Between the two of them, they pulled in half of all responses. Rebel Bear, interestingly, tied with Donte Moncrief and Tobias Singleton for third in the poll, while Cody Prewitt, Randall Mackey, Jamal Mosely, and Uriah Grant each reeled in a single vote.

What's interesting to me is that Barry Brunetti, despite receiving positive praise from the Right Reverend over the past few weeks, didn't get a single mention from the Cup's social media followers. None of our newly-recruited defensive backs - Wesley Pendleton, Senquez Gholson, Denzel Nkemdeche - were able to earn votes either which, considering just how badly the Rebels need some help in the secondary, is a bit surprising (perhaps a Brassell vote or two was intended for Brassell the cornerback and not Brassell the wide receiver, but no specifics were mentioned).

Regardless of vote tallies, though, it seems that there are a lot of new pieces to the Rebel club which fans are excited to see.