I have a theory that October 20, 2007, was the single worst day in Ole Miss athletics of the past decade or so. There's a chance that you were able to successfully repress this memory, so I'm going to take out the proverbial doll and remind you exactly where it touched you (Hint: It's the heart, the head, and probably the liver.) The Arkansas game of that year ended in a 44-8 Razorback rout. Inexplicably, a Rebel team with BenJarvus Green-Ellis, Shay Hodge, Mike Wallace, and Dexter McCluster managed to successfully avoid the end zone until late in the fourth quarter. Seth Adams also threw four interceptions. There is a correlation here.

But Ed Orgeron was nothing if not a showman, and someone in the sports marketing department planned a fireworks show to announce a new capital campaign. Which is great, right? Everyone likes fireworks! At 2:30 in the afternoon! In the Mississippi sun! 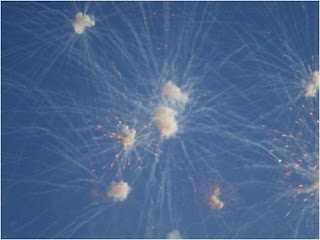 They're so majestic! And also set some bushes on fire and knocked out power to half of campus and the stadium.

I would like to humbly nominate the 2007 Arkansas game as the low point in Ole Miss Athletics over the past decade or so. Let's hear your thoughts, but first a reminder. The past decade has seen home losses to Wyoming and Jacksonville State, a basketball coach arrested for allegedly causing an international incident, Hurricane Orgeron, and the ignominious theft of pillows and alarm clocks from hotel rooms in the greater Opelika, Alabama metropolitan area. So drag up all those deeply repressed athletic memories, and please, don't limit yourself to one sport or one incident. Remember, We Are Ole Miss, and we have kept the "fun" in "dysfunctional" since 1848.