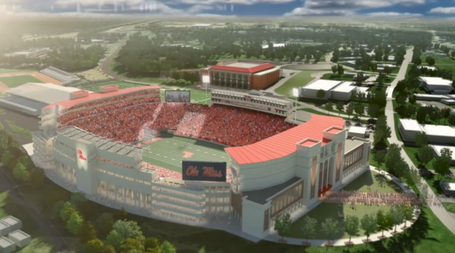 The Forward Together Rebels campaign, a whopping $150 million endeavor to expand, enhance, and renew Ole Miss' football and basketball facilities, was announced yesterday. I have yet to find a single Rebel fan who isn't head-over-heels in love with the proposed ideas, and have even observed overwhelmingly positive feedback from our fellow Southeastern Conference members.

The project will be completed in two phases. The first phase will be the construction of the new basketball arena - the name of which is forthcoming and is likely to be corporately sponsored; I suggest "Abner's Arena" - which will be located just to the east of the site currently occupied by Tad Smith Coliseum. It will seat roughly 10k spectators, utilize state of the art lighting and acoustics, have large windows to allow for natural light to enter (as well as provide a pretty cool, ominous glow to emanate from the building at night), and have spaces set aside for club and box seating, something which the Tad Pad lacked altogether.

Looking at the interior of the planned arena, one can see the tiered seating, court side seating for fat-pocketed donors and a sizable student section. The scoreboard from the Tad Pad, being only two years old, will likely just be moved to the new arena. At least, that's what I'm seeing with the scoreboard hanging from the rafters in this rendering. The natural lighting looks like it has plenty of potential and the windows give a look that suggests that they'll be street level, meaning that you'll walk into the building and then down into your seats, for the most part.

The outside of the arena will mesh nicely with the rest of Ole Miss' red brick campus, and the pavilion/beer garden (please plant some trees there and make it a beer garden, I'd donate everything I had to make that happen) looking thing on the left of the structure should be a welcomed element of the facility. One would think that it could give Ole Miss basketball that Grove-like element of standing around, waxing poetic, drinking, and rubbing elbows that we Rebel fans are quite fond of.

Vaught-Hemingway's northern side would get a well-overdue and much needed face lift with this project's second phase (during the first phase, the updates to VHS will be rather minimal, but necessary). The north endzone's new entrance will be similar to that of the south endzone, and will feature a club seating, pavilion areas, and an Ole Miss sports Hall of Fame. The Powetron will, sadly, be taken down in favor of high definition scoreboards in the corners of the stadium (a la Bryant-Denney), but the bowled in field should enhance the stadium's acoustics and put the capacity at something a bit over 70K. The outside area of the north endzone, currently a parking lot and the StarnesAthletic Center, will house what has been described as an Ole Miss football "plaza". The idea will ultimately be to sufficiently connect the Grove with the stadium byway of walking paths, landscaping, and other aesthetic upgrades. They even plan to extend the Walk Of Champions beyond the Grove, taking it all of the way to the front door of VHS.

The whole idea behind this is, in my opinion, brilliant. As has been pointed out, the SEZ club's entrance is fantastic, but hardly used because most fans enter the stadium from the northern side, as that's the side of the stadium which faces the Grove.

As mentioned in last night's truncated practice report, Chancellor Dan Jones and Athletics Director Pete Boone, much maligned figures amongst a significant portion of the Ole Miss Rebels fan base, are overwhelmingly confident of this project's feasibility and impact on the future of Ole Miss athletics. Chancellor Jones, in an atypical fashion, said that Ole Miss' goal is to win championships and that he, as Chancellor, felt that such facilities upgrades could put the Rebels in incredible position to win in the future. Love them or hate them, one has got to love the approach they're taking with this ambitious campaign. They've taken the lead on this, and our choices as fans and potential donors are to either follow or get out of the way.

The money necessary to complete these projects will be raised three separate ways: corporate sponsorship and advertising; season ticket sales and seat allotment; and charitable donations. If you hold season tickets, you're going to get something in the mail soon asking you to donate to the cause. If you don't pitch in, you'll lose priority in choosing where your seats are. If you do pitch in, your place in the season ticket pecking order will be determined by how much you pledge over so many years. If you don't hold season tickets, you can either start buying them or visit the campaign's website (ForwardTogetherRebels.com) to contribute a tax-deductible donation. If you're Fred Smith, we'd like to show you just how sweet the words "FedEx" will look on the new arena floor's baseline.

As you may have gleaned from this, I'm geeked out over this, and am already developing an impatience for these projects (START DIGGING NOW). I imagine most of y'all feel the same way.