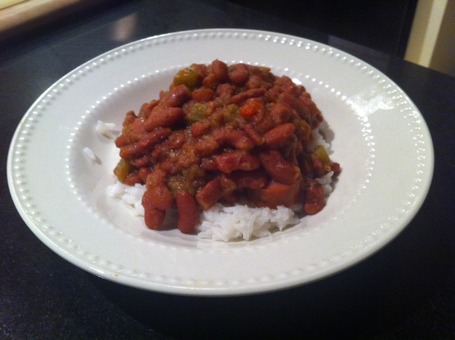 If this doesn't look delicious to you, then you're broken.

While I'm sure we've all heard the term, I don't think that many of us can actually define "Creole," especially as it relates to cuisine. While much enjoyed by people in and around New Orleans - as well as the Deep South in general - the defining characteristics of creole cuisine are hard to peg.

It's spicy. It's savory. It's nuanced yet simple. It relies heavily on both pork and seafood. Its chief grain is rice, but it never shies away from a good baguette. It utilizes old world techniques and terminology, while bringing the best out of new world ingredients. It's French. It's Spanish. It's Caribbean. It's African. It's Native American. And it's all so much more than that.

It's the result of several centuries worth of so many varied, vibrant cultures crossing paths a few hundred years ago at the mouth of the Mississippi, and it's delicious.

Perhaps no dish embodies this uniquely American mishmash of cultures better than that of red beans and rice. It is simple, ubiquitous, outstandingly delicious, and can literally trace its ingredients' respective histories all across the globe. Today, I'mma learn you how to throw together some red beans and rice. This is my way to do it, and you're welcome to find your own, but I guarantee that, so long as proper methods and quality ingredients are used, you can never go wrong with a hearty bowl of this stuff.

First, soak your beans. Get them out of that bag and into a colander. Rinse them off and sift through them to make sure there aren't little pebbles in there. To this day, I've never found anything but beans in my dried bean purchases, but we've all heard the urban legends of a guy cracking his tooth on a piece of gravel when he was eating his black bean enchiladas. You can't be too careful and it takes like a minute anyway so just check. Once you've done that, you can either put them in a covered, refrigerated pot of water overnight, or you can utilize the quick soak method.

Don't get ahead of yourself. I don't know that it's actually called that; that's just the name I give it. Put the beans in a pot or dutch oven with a few quarts of water. Bring that to a boil. Turn the heat off and let the beans sit in the hot water for, oh, and hour-and-a-half or so. They should be pliable enough after that.

Chop your vegetables. Put a few tablespoons of oil in the bottom of either a large pot or dutch oven. Obviously, a cast iron dutch oven is going to give you the most consistent heat, therefore making it the ideal vessel for this job, but whatever steel or aluminum deal you've got lying around to boil sketti in will do. Over medium-high heat, sweat those onions and celery bits - along with a heavy pinch of salt - for about seven minutes or so, or until they turn a bit translucent. Pop the bell peppers in there along with a bit more salt for another, oh, five minutes or so. Then your garlic for no more than a couple of minutes (you really shouldn't cook garlic too long like this because burnt garlic is about as appetizing as burnt hair).

Once your trinity-plus-garlic is cooked, add your beans, your herbs, your spices, and your water.

Bring it to a boil. Reduce the heat to a simmer and cover that mess. Let it simmer for about two hours, stirring it every fifteen minutes or in between beers. To finish the beans, raise the temperature to medium-low and cook for about another fifteen to thirty minutes. At this point, you can regulate how gravy-ish your beans are. If you want them soupy, stir a lot. If you want them to more closely resemble beans then don't stir all that much. There's no right way to do this.

For this most recent dish - the one pictured - I cooked my andouille separately from my beans. I normally wouldn't do that, but I'm dating a cud-chewing, hummus-munching, 100% bona fide vegetarian. Animal parts make her feel all gross and stuff, and I was cookin' for the both of us this go-around, so I simply grilled my andouille links beforehand, let them cool a bit, and sliced them up before adding them to my individual dish. If you want to add andouille to your beans as they finish, that's cool. If you wanna get real traditional and rep the Big Easy by adding pickled pork that's also cool, but you're gonna have to either buy the stuff (good luck finding it) or pickle it yourself.

Oh, and if you've got a butcher that makes andouille that's worth a damn, be sure to patronize them. The stuff I bought from the Safeway in DC tasted a bit too much like hot dogs to me.

Yes. If you've been paying attention, the prep time for this dish is a few hours. A good plate of beans takes a while to cook. Nothing worth doing is ever that easy so suck it up and prepare ahead of time. If you've never done this before, you'll be amazed at how fucking awesome a properly prepared bean tastes.

Serve it over rice. I will not give you instructions on cooking rice.

*If you're in a last-minute pinch, then use canned beans. I understand that you're a busy person and all, and soaking dry beans takes some time, so I'll let it slip once or twice. Just don't complain to me if you can't get the robust, full, savory flavor of a properly prepared red bean out of a can.