Another year of sports has come and (luckily) gone. That means it's time for everyone's least favorite summertime RCR series: Red Cup Cooks! Only two cup writers are in the same city now, but we've gotten together with a couple of other faithful readers to bring back the series. We were without our fancy camera this time, but Smeargle (who likes Pokemon and is over the age of 12) has a nifty iPhone.

In this installment, we cooked the traditional Spanish dish of Paella. Yes. It was expensive. 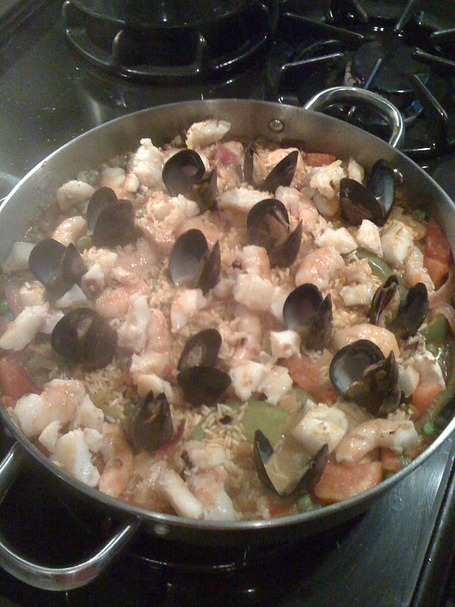 15 mussels
1 cup of dry white wine
1 red onion (half diced, half sliced)
Some olive oil
1 chicken breast, cut into pieces
1/2 lbs of shrimp (we cut ours in half to make more pieces.... I should have gone with a full pound)
1/2 lbs of white fish, without bones cut into pieces (we did flounder)
4 pieces of garlic, minced
2 whole jalapenos
1 tomato, cut into pieces
1 frozen box of green peas
Smoked paprika
1 ½ cups of rice, long grain
Large pinch of saffron
1 liter of chicken broth
2 tablespoons of minced parsley

Wash the shells of the mussels. Our mussel shells had some barnacle-looking things beginning on them, so we just picked those off and ran the mussels under water. Some people let mussels soak in cold water for a couple of hours. We didn't have a couple of hours. Warm the wine with the diced portion of the onion at low heat. When hot, add the mussels. Cover the pan with a lid and let it boil for 5 minutes. After 3 minutes you can start to take off from the pan the mussels that are very well opened and let them cool off. If after 5 minutes there are still unopened mussels, throw away those that have not opened. I was very worried about this step, but we only had to throw one away. As for the wine, keep it to the side.

Put some oil in a different pan, and roast the chicken. You're not looking to cook it all the way through here. It will cook when added back to the paella. After about five minutes, take off the chicken, set it aside (in the meat bowl). 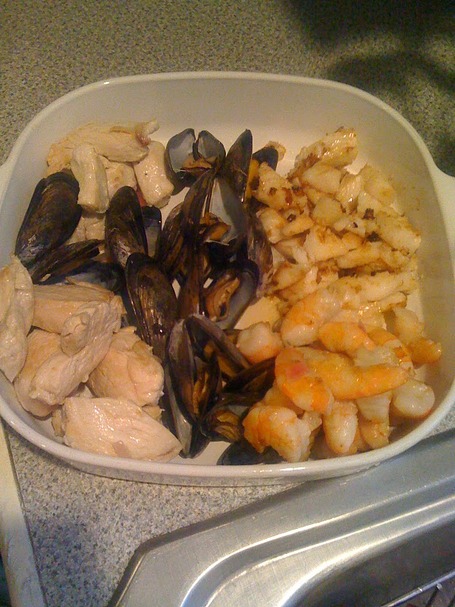 In the same pan add the shrimp and allow it to cook for one minute on each side. Remove it and add to the meat bowl. Next, cook the fish for one minute on each side. The final meat, add the fish to the meat bowl. We chose to do a sort of cool down period for each of the meats in the white wine, but I'm not sure that did anything. Add the rest of the oil and roast the extra onion until it just starts to become clear. Add the tomato, bell pepper, the jalapenos, the peas, and the spices (other than saffron). When they are cooked, pour in the wine and add the rice. 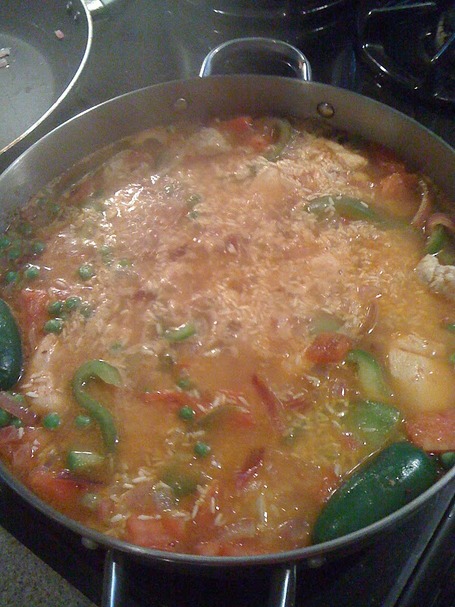 Meanwhile melt the saffron into the broth, and pour it over the rice. er the heat, and let it boil without stirring. It's important that some of the rice burns a bit at the bottom of the pan. It will give some structure to the dish. Over the rice, add the chicken, the fish, and the shrimp. Let them cook for other 10 minutes. Add the mussels. Stir the meat into the rice. Remove the jalapenos. Serve garnished with parsley. 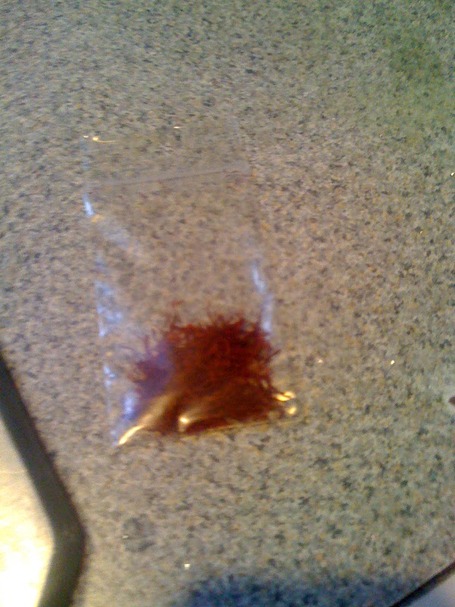 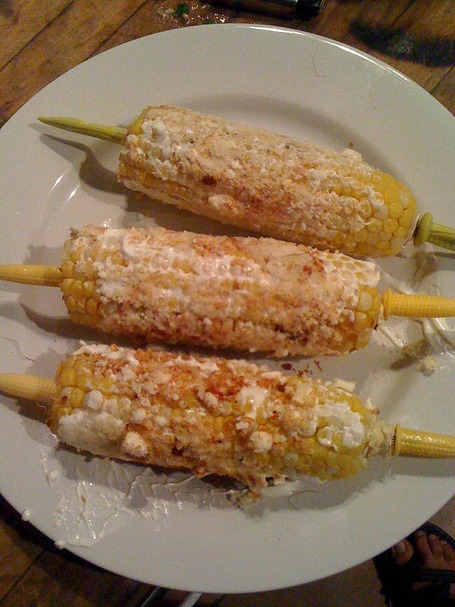 Cojita (if you can get it) cheese (we used feta)

Broil the corn. When it's cooked, cover it in sour cream. On a plate, mix the cheeses with the cayenne pepper. Roll the ears of corn in the cheese and pepper mixture. Eat.