Share All sharing options for: The Local Voice #133 - The Most Nonsensical Thing I've Ever Submitted To Them

I say "nonsensical" because, as is typical these days, a lot of stuff was flying around my head at once when I wrote this column. It's all over the place and I was really shackled by the word limit imposed on me by print media. There's only so much space on a sheet of newsprint, a space which my thoughts can sometimes dwarf.

I did my best. As I promised in the print copy of this, I'll do my best to elaborate some more here and answer any questions y'all have. I think this piece, despite lacking cohesion 'n' shit, is a great jumping off point for an offseason topic we're already well used to around here.

As always, I wanna thank the folks at TLV for putting up with us at the Cup. Y'all are great. 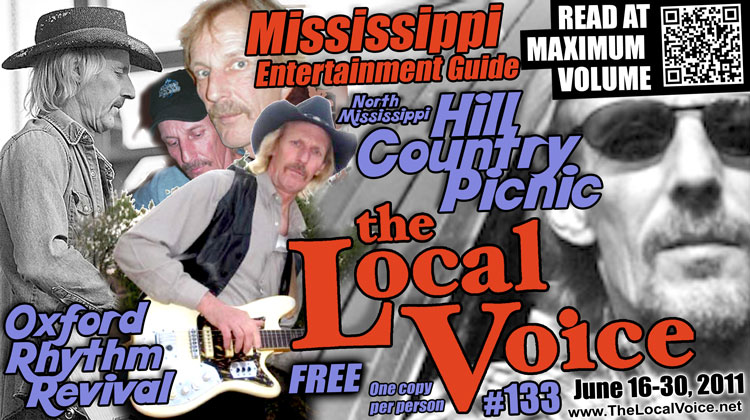 Over the past few months, Ole Miss Rebel fan frustrations have magnified into something more than just grumbles in the stands of Vaught Hemingway. Call it poor timing, call it mismanagement, call it a statistical inevitability, call it the "curse of the bear" - yes, people have done that - or call it whatever you'd like because, regardless of how you call it, people aren't happy. As a result of a year in which the Rebels failed to reach the postseason in football, basketball, and baseball, alumni donations have been withheld, school allegiances have been tested, and coaches and their administrators have been the focus of significant criticism.

And rightfully so. Being in charge of such a collegiate program, where oftentimes irrational passions are backed up by inexplicably exorbitant bank accounts, leaves one vulnerable to such ire - something which Chancellor Dan Jones learned quite recently.

Earlier this year, a group of boosters known as Rebel Nation wrote to Chancellor Jones detailing what they see as problems within the Ole Miss athletics administration and what they feel are appropriate ways to overcome said problems. I've read the letter and it, surprisingly, was cordial, honest, well-reasoned and well-intentioned. It was exactly the type of letter, written on behalf of several people who are in a position to contribute significant figures to Ole Miss if only they were confident their money would be used well, that you would expect to attract attention from fans, administrators, and fellow boosters.

Jones' response to this letter was predictable. He, understandably, played close to his vest and remained as professional as he could. He also wasn't able to really address their concerns - concerns like "our basketball team hasn't been to the tournament in ten years" - in a way which suggests that he, or anyone he surrounds himself with, takes such at all seriously. To be fair, Dan Jones' job is first and foremost to guide the University of Mississippi as an academic institution, so he certainly deserves a pass on perhaps not giving too much of a damn about ballgames.

But would anyone expect anything different from, say, Pete Boone or Houston Nutt?

Let me bust out an anecdote. This past weekend, I had a unique opportunity to see, if only for a brief few moments, how a truly inspired and forward-thinking athletic director operates. David Brandon, a former Michigan football player who made a fortune selling pizzas (that's no joke; the guy is the former CEO of Dominos), is the Athletic Director for the University of Michigan. He's a "good ol' boy" in the traditional sense of the term in that his history and cronyist ties have certainly gotten him where he is, but in the sense that he doesn't deserve such responsibility, he's as far from a good ol' boy as you can get.

I met Mr. Brandon at a University of Michigan alumni fundraiser event in Washington, DC. Why? Because I'm dating a girl who went there and I drag her along to Ole Miss things all the time - she even got to watch us lose to Vanderbilt this past year! - so it's only fair that I assume the role of dragee over dragger on occasion. At this event was Brandon, head basketball coach John Beilein, head football coach Brady Hoke, and a few other higher-ups in Michigan athletics. I'll spare the details for this space, but suffice it to say that, when listening to them speak I was blown away.

I heard of detailed plans for fundraising, facilities upgrades, coaching hires, recruiting plans, scholarship funds, and a whole host of other things I've only heard alluded to by the Ole Miss athletics administration, and I was hearing this as an OUTSIDER! I, technically, wasn't even supposed to be at this event! And yet, they were converting me. I was ready to donate money that I don't even have on the spot. Smart people making smart decisions regarding the future of their athletics programs, even in the wake of recent failures?! I was stunned.

I left frustrated, but then quickly became optimistic. This is possible at Ole Miss, and I refuse to let anyone tell me otherwise. Sure, we'll always have geography, demographics, and resources working against us, but I truly believe that with the right people in the right places making the right decisions, we Rebels will too have a set of athletics programs we can truly be proud of.

Is the Ole Miss athletics administration as committed and inspired as they can be? Most, yours truly included, would argue no. I do not think they are failing to the magnitude that perhaps most casual Ole Miss fans would believe, but after seeing what a truly driven, visionary, and passionate attitude towards athletics looks like, I do argue that Ole Miss can do better. It's time to junk the good ol' boy system that has stymied our athletics potential over the past forty years for good and start concerning ourselves, not with where Ole Miss is going, but where Ole Miss can go.

[As we've seen, the compentency of athletics departments has been a bit of a discussion catalyst on the Rebel intrawebs. The reason I wrote this is, after the whole "Forward Rebels" or whatever it's called fiasco with the letters was revealed, I lucked into attending this event and realizing just inept we are sometimes.]