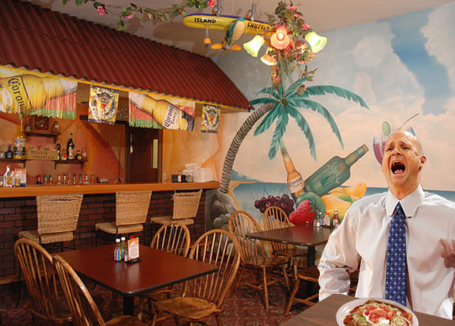 SCENE - Ole Miss head basketball coach ANDY KENNEDY sits alone in an empty corner of [BLAND, GENERIC MEXICAN RESTAURANT IN OXFORD, MISSISSIPPI REDACTED]. There is tacky nonsense, like inflatable Dos Equis bottles and pictures of gauchos atop their steeds stuck all over the wall, just like a real house in Mexico (so we're told). COACH KENNEDY has already ordered his lunch. As he alternates between taking bites of his arroz con pollo and screaming at and about the restaurant's ecclectic wait staff, his lunchtime companions, HOUSTON NUTT and MIKE BIANCO arrive. BIANCO approaches the restaurant's HOST.

MIKE BIANCO: Could we get a table for three please.

RESTAURANT HOST: Three? There is only two of you? Why you want three?

[Across the dining hall, Kennedy hears the commotion.]

ANDY KENNEDY: Hey, shortstack, shut your piehole and sit your ass over here. Bring oafy with you.

MB: Did you hear the GD attitude on that? Holy fucking shit, this is going to be fucking great.

[NUTT and BIANCO are escorted to the table with KENNEDY. The three exchange pleasantries and sit. A WAITER comes over to take drink orders.]

MB: Good call. Way to play the percentages. */dismissive wanking off motion while pointing at Kennedy* "I'll take five margaritas. Cinco margaritas on cinco de mayo for numero cinco. I hear they love it when you speak mexican to them.

AK: They don't. I used to have one. He'd bitch and moan if I tried to speak Mexican to him. Said that I was "mocking" him and his culture and that he wasn't even a "Mexican." Can you believe that shit?

MB: That wasn't a Mexican. That was a Puerto Rican. There's a difference. That's like comparing a Vinny Castilla to a Pudge Rodriguez, but what do you know. You're a dumbass basketball coach WHOO UP TOP!

AK: Oh, Christ. On second thought, I'd like a Dos Equis.

[The WAITER looks at NUTT, who is squinting at menu, looks surprised momentarily, thrusts his finger skyward, then purses his lips, unpurses and purses again.]

HN: Yeah, well, HAH, I'mma have me a margamaramma.

[The WAITER takes their drink orders and, in a few moments, the drinks are quickly brought out for the three most well known men in Oxford.]

MB: Holy shit, look at the hands on that guy over there. He's carrying seven fucking plates of food. That's my next shortstop right there.

AK: Whoa, holy hell, he just dropped three of those plates on that lady. And I'm not sure that's a guy, coach.

MB: Four out of seven ain't bad. I still like him. Strong forearms and whatnot. And I am pretty sure that is a guy... I dunno, got lots of earrings and makeup on and shit. Anway, it's always time to recruit, right Houston?

[BIANCO leaves his seat to approach the young person to see his or her interest in Rebel baseball.]

HN: Always time to recruit? Yeah, never heard of it. Saw it on a message board once, but I don't read those things you know? Words are just letters all jumbled together and playin' grabtail at a company picnic. I don't fool around with games, I'm here to work. Character. Barfarkus gollywag heenumplatters.

AK: Yo! Can I get another beer please?

HN: YESSIR! And another murkywater scalawag for me!

[Moments pass and BIANCO returns to the table.]

MB: Well, boys, I think I've got the fucking piece to the puzzle to get to fucking Omaha.

AK: That butterfingered waiter at shortstop?

MB: Oh, no, he can't play ball. Yeah, turns out he's like a guy but really a girl or, I dunno, the other way around. You can never tell in this fucked up ass strange little town. His mom's a travel agent though and is going to hook me up with some airline tickets, so I can finally go. Monkey off my motherfucking back now baby!

[WAITER returns with second round. As he's about to leave the men with their drinks, he's grabbed on the shirttail by an aggressive coach NUTT.]

HN: Yeah, garcon, I'mma get me somethin' to eat. Somethin' with cheese. Sour Cream. Lettuce. Somethin' that really makes me wanna hop up and eat.

HN: Just make me a taco.

HN: Woo, hey, big boy, saved ya a seat over chea! Get this man here the biggest chimney changer you got!

HN: Man, I love it when he speaks mexican. How you enjoyin' Mexican Independence Day so far Powe on the low low?

JP: Actually, sirs, Cinco de Mayo is simply a celebration of a brave group of Mexican militia who conquered a highly skilled French battalion at the Battle of Puebla. It's only regionally celebrated in Mexico though nationally celebrated in America by anyone looking to imbibe heavily and raise their sodium levels on average by 3,000 percent by consuming gloppy cheese dip and fried tortillas wrapped around sauteed chicken – none of which is native to Mexican cuisine.

[MIKE BIANCO passes out after chugging his second drink. On his way down, he murmured something about "fuckin' motherfuckers" and "the fuck Cooper Osteen and Matt Maloney and hrrrrng."]

AK: How in the hell did that just happen?

AK: Hey, Coach, did you see this bull? Petey's tellin' us that if we're gonna use our company cards at lunch we should be ordering the special and no booze. Can you believe that?

HN: Heh. I didn't get that. I just got a picture of ol Pete holding up a credit card, some beer, and with a funny look on his face. Whaddaya call that Big Powe? Mean Puggin?

JP: Actually, coach, it's "Mean Muggin," and it's usuall-- you know what, nevermind.

[A bunch of shit happens and then JP rides away on a scooter with HOUSTON NUTT'S sombrero.]