Share All sharing options for: Jeremiah Masoli Drafted by the UFL's Omaha Nighthawks

The United Football League, a, organization whose UFL acronym sounds more professional wrestle-y than football-y, held their 2011 draft this past Monday evening and was able to pick up a bevy of former college stars not taken by any of the National Football League franchises during this past weekend's NFL Draft. With this year's prospect of a lockout keeping teams from signing rookie free agents, a lot of names which would have ended up peppering a few NFL rosters were instead seen on the draft boards of one of the five UFL squads.

Former Ole Miss Rebel Jeremiah Masoli was one such player. Taken in the UFL's eighth round, Masoli will likely compete for playing time right away behind current Nighthawk quarterback DJ Shockley. General Manager of the Nighthawks, Rick Mueller, said "Jerimiah stood out to ... the entire staff at the Stars and Stripes all-star game.  He fits what we are doing and has a chance here to play the quarterback position."

The Nighthawks, whose logo I imagine looks something like this - 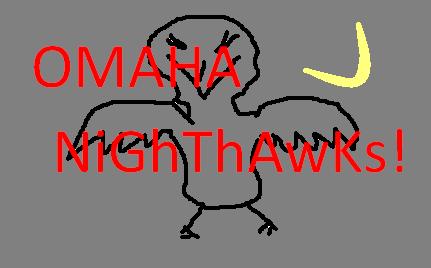 - drafted a total of twelve players in the 2011 UFL Draft, which was held at a Doubletree outside of Milwaukee - it was a nice enough spot, they kept the conference room clean and had Frosted Flakes at the free continental breakfast, plus everyone with CapitalOne cards earned rewards points - on Monday. The five teams which make up the UFL, which is just a few teams shy of a below-average little league, selected several players over the ten round period which have some legitimate name recognition:

So Masoli's got a shot here to make a living wage playing a game he loves. And he gets to live in Omaha UNLIKE OTHER REBELS WHICH PLAY A DIFFERENT SPORT YOU KNOW WHAT I'M SAYIN OF COURSE YOU DO! UP TOP! We may joke around here and there, but it's all keedin. Congrats Masoli, if you want 'em, and best of luck in Omaha.