Share All sharing options for: TLV #128 - The Rebel Quarterback Race

The Local Voice, everyone's favorite bi-weekly publication of locally written, drawn, and produced content, is hot off of the presses this week just in time for Saturday's Grove Bowl. As a spring football primer of sorts, our column this for this issue focuses on the four Rebel quarterbacks vying for the starting role during this offseason. If you're in and around Oxford, grab a hard copy. If you're with us here on the intertubes, click the cover for a full PDF, or click the jump to see the column. 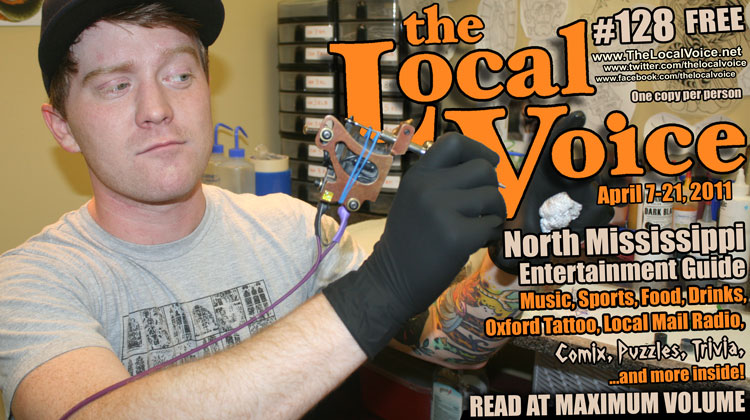 Saturday's Grove Bowl, being hardly much more than a glorified practice, may raise for Rebel fans, pundits, and even coaches as many questions as it answers. One question though, and perhaps the central question of the spring, seems to be resolving itself as four Rebel quarterbacks continue to compete against one another to earn the coveted starting role. Quarterback is undeniably the most important position in football, and the Ole Miss Rebels are no exception to that axiom. Alongside the offensive weapons already in place, solid output from the quarterback position could create a potent Rebel scoring attack, capable of keeping the Rebels alive in the toughest of this upcoming season's contests.

Each of the four potential starting quarterbacks has some upside just as well as down. Hopefully we at the Cup can, over the next seven-hundred words or so, impart you with enough information on both so that you, the loyal reader, may have a bit of perspective on the goings on of the Grove Bowl and make an informed decision/kneejerk reaction regarding the future of the Rebel quarterback position.

Junior Randall Mackey appears to be the frontrunner in the race, as he has performed well in every practice this spring. Mackey possesses both incredible athleticism and a strong arm. The coaches rave about his accuracy and feel that he handles the rush well. Mackey's high school and junior college careers were prolific, earning him all-American honors at both levels, so there's no question that he has the ability to create big plays. His primary drawback is his size. Mackey may not be six feet tall and weighs less than 200 pounds. Randall also has an issue with a speech impediment that, rather tragically, affects him primarily in the huddle and at the line of scrimmage - exactly when a quarterback needs to be as loud and clear as possible. The impediment appears to be significantly improving, with the Rebel coaching staff commenting on it not having yet been a problem in practice, but that's in front of a few hundred people on a field in Oxford, Mississippi, not 50,000 cowbell rattling yokels in Starkville.

If we were to wager anything on this quarterback, race, we'd place our bets on Mackey, but we still cannot be 100% sure on his SEC potential.

Junior Zack Stoudt appears to be second in the pecking order early this offseason. The junior college transfer has a cannon arm, which is perhaps the strongest on the team. He makes good work of that arm, unfortunately, and has a real tendency to overthrow his receivers. He's not as athletic as Mackey and could have trouble moving in the pocket, especially against SEC defenses, but he is bigger than Mackey and does a fair job of using his height to his advantage. An added bonus is that Zack is the son of Cliff Stoudt, a former quarterback for the Pittsburgh Steelers. It's not exactly an Archie/Eli type of connection, but it's an NFL pedigree nonetheless worthy of mention.

The favorite entering the spring was Junior Nathan Stanley. This is Stanley's third spring on campus, and he'll be entering his fourth fall in Oxford at the beginning of football season. He's easily the most experienced quarterback on our roster, and he has shown the ability to throw deep routes very well. For some reason, though, Stanley is faltering a good bit this spring compared to years past. He has shown some real inconsistencies which weren't readily evident in any of his previous seasons. Perhaps this has a lot to do with new offensive coordinator David Lee's offense, or perhaps he has not been the same since being pulled in the Jacksonville State loss (despite him throwing three touchdowns). Whatever it may be, though, Stanley certainly is not the quarterback we all would have hoped him to be after seeing him in practices during his first two years on campus.

The dark horse candidate and the quarterback around which future Rebel offenses may be built is sophomore Barry Brunetti. He is of the Jeremiah Masoli mold, with a shorter, stocky body and very good running ability. As a passer, he looks really good at times, but displays accuracy issues. He is young though and this does look correctable, meaning that a redshirt year would probably do him and the future of the Ole Miss quarterback position some significant good. Regardless of his potential though, we cannot even certain that Brunetti will be allowed to play for Ole Miss this fall. A transfer from West Virginia, the Memphis native and former Memphis University School standout is required to sit out one year before seeing action as a Rebel. However, he has applied for a waiver with the NCAA citing a family hardship as the reason for his transfer. With Ole Miss' track record with NCAA appeals, it is anyone's guess as to whether or not Brunetti will be eligible to play right away or forced to take a redshirt year.

Whoever suits up for the Rebels at quarterback this Fall will have significant help around him in the form of an experienced offensive line, proven halfbacks, and promising young receivers. If he, whoever it may be, can be an offensive focal point as well as a leader on the field, we could find ourselves with a more than serviceable Ole Miss Rebel offense.