The Bear + Nathan Stanley + Ole Miss losing = a pretty frustrating week here at the Cup. Let's lighten the mood up around here, shall we? Here's the STUFF OLE MISS PEOPLE LIKE FINAL FOUR: 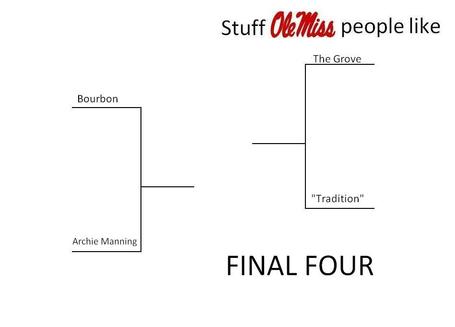 After gut wrenching battles, the Final Four of the Stuff Ole Miss People Like Tournament is upon us! Out of the food/drink region comes Bourbon, the brown water which fuels the heart and soul of every good Rebel. The people region is represented by none other than Archie Manning, the man who truly embodies what it means to be an Ole Miss Rebel. "Tradition" slipped past collared shirts in the miscellaneous region to represent the final four as the only number two seed. And The Grove predictably dominated the places region.

Today, Archie Manning meets Bourbon in a clash of two titans of the Ole Miss collective identity. There's a poll for you to vote in, just as there's a comment thread in which you should get to snarkin'.