Ole Miss people and Mississippians in general love to eat. We're the most obese state for about 203 years runnin' and, despite Haley Barbour's efforts to get us up off of our hams and get walkin', that doesn't look to change any time soon. You couple that with Ole Miss' perennial top-10 party school status, and you've got a horde of thirsty, hungry people.

So, of course, the food/drink regional is going to be hotly debated and discussed. Please be civil, but don't hold back with your opinions. Omissions, predictions and general tomfoodery (c wut i did thurr?) should go in your comments thread after the bracket and jump. 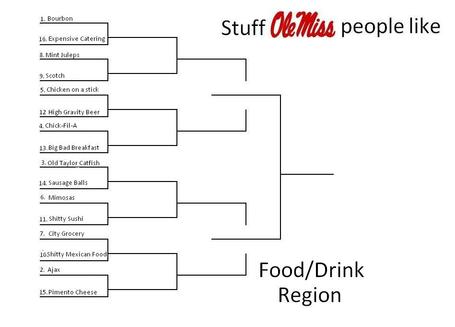