Share All sharing options for: Rebels travel to take on streaking Eagles

The #20 Golden Eagles are playing some great baseball right now.  In fact, they might be the best team in Mississippi and maybe the best behind East Carolina in the C-USA.  They come into today's contest at 18-5 and took last weekend's series against Tulane by scoring a total of 44 runs.  I know the Tulane staff has had some injuries, but it's still nuts that Southern scored that many when we could only muster 7 on the weekend.  Anyway, tonight has some very important implications for our season, RPI, and hosting in Mississippi chances. 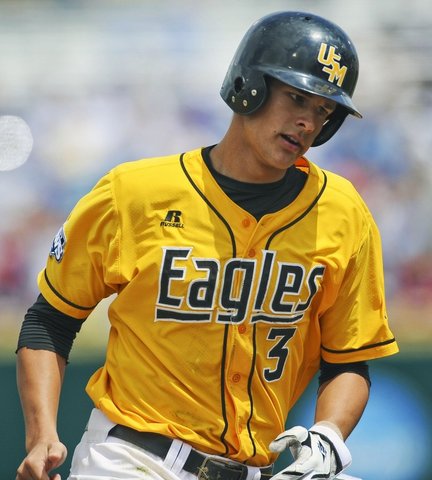 B.A. Vollmuth trotting the bases after one of his 9 homers on the year.

I have been greatly surprised by Southern's success this season.  They have been doing so well that many pundits have been discussing a return to Omaha, where they were just two years ago.

Defensively, the pitching staff has done pretty well for the Eagles.  They have an ERA of 3.39.

The Rebels are led at the plate by Alex Yarbrough with a .347 average.  Tanner Mathis has a .337 average.  Matt Smith has gotten out of a nasty early-season slump and is now batting .303 with a ten-game hit streak.  As a team, Ole Miss hits .287.

Sophomore RHP Boomer Scarborough will climb the hill for the Golden Eagles.  He is 1-0 on the year with a 1.12 ERA.