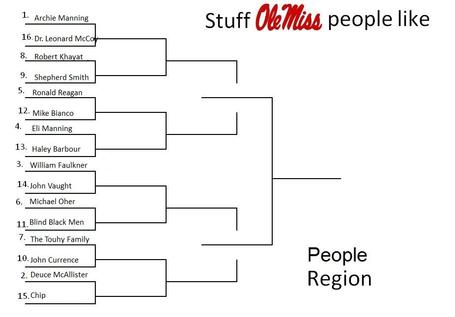 1. Archie Manning - Who else could go here? The head of the First Family of quarterbacks endured some hard times as a Rebel but had a song written about him and is the most beloved player of the most beloved sport at the school.

2. Deuce McAllister - Deuce McAllister helped bring the Rebels out of the doldrums of post-probation football and has continued giving back to the University since graduating. Deuce's number 22 hasn't been retired yet, but it probably should be. I would venture to say that no other no-quarterback in Ole Miss history has had more of an effect on his team.

3. William Faulkner - Ole Miss fans love them some William Faulkner. He reminds us that we're not too bad at that readin' and writin' and such. Faulkner also is something we can talk about to make our degrees seem more important than they actually are, and that's something that's near and dear to all of our hearts.

4. Eli Manning - The second frattiest Manning (I seriously want to party with Cooper), Eli helped lead a couple or bad teams to bowls. Also, when the Giants won the Super Bowl, it gave us a brief respite from our own national title hopes being repeatedly dashed.

5. Ronald Reagan - Everything was better when Ronald Reagan was president. Everything. If you disagree, shut your dirty mouth. The last conservative to take up acting, Reagan is a shining light to the Rebel faithful.

6. Michael Oher - Oher wouldn't be such a big deal were it not for the national notoriety he brought to Ole Miss with the movie, "The Blindside." Wait, there was a book?

7. The Touhy Family - Leigh Anne Tuohy was, at least for a little while, the envy of white suburban housewives around the nation. Sean who?

8. Robert Khayat - While Dan Jones may "technically" be the "chancellor," I think that if I were to encounter them both I would refer to them thusly: "Hello, Dr. Jones. Hello, Chancellor." As much as segments of Rebels hate Khayat, he's adored by a great number of people as well. I started to say that were it not for his stance on Old South imagery he'd be listed higher on this list, but after thinking about it, I'm not sure that's the case. That's a good thing.

9. Shepard Smith - Our fans like Fox News so much that they can overlook the fact that Smith might be homosexual. That's saying a lot in Mississippi. Yes.... I know I spelled his name wrong in the graphic. I don't know why. SHUT UP! STOP HASSLING ME!

10. Blind Black Men - DID YOU KNOW THAT COLONEL REB WAS BASED ON A BLACK MAN AND IS THEREFORE NOT RACIALLY INSENSITIVE? I know, right? Damned dems.

11. John Currence - Be prepared. Oxford's best chef is going to be a contestant on the next season of Bravo's Top Chef. I'm guessing it will come up at least twice a week in unrelated conversation.

12. Mike Bianco - Bianco has been wildly successful at Ole Miss but has to lead us to the promised land at least once before he's moving anywhere up this list.

13. Haley Barbour - Accidentally mention the governor's name loud enough at any event and people begin clapping all around you. Seriously.... it's happened to me before.

14. John Vaught - Obviously a lot of people probably think that Vaught deserves to be much higher. Really though, you don't hear our fans talking about him anymore. Also, he held us back a great deal in refusing to recruit black athletes and pretty much destroyed any hopes we have in basketball.

15. Chip - Mention Chip's name to anyone who frequents City Grocery's bar, and they'll talk your ear off for at least ten minutes about how badass he is. In fact, I really hope that Whiskey Wednesday doesn't read this. I'm going to go drinking with him tomorrow night and would love to discuss something other than a bartender in Oxford.

16. Dr. Leonard McCoy - Giving geeky Ole Miss fans a leg up in Star Trek trivia since 1966, the Doctor (who hasn't been born yet mind you) will attend Ole Miss for medical school.