To assuage the frustration of an Ole Miss-less March Madness and provide the lot of us something to do over the next week or so, Juco, One Man to Beat, Whiskey Wednesday and I have, in a fashion which slightly rips off Spencer Hall at EDSBS, come up with the STUFF OLE MISS PEOPLE LIKE MARCH MADNESS BRACKET! There are sixty-four people, places, things, and ideas, all of which are an integral part of the Ole Miss Rebel experience, which we have compiled for a March Madness-esque tournament to determine what it is exactly that we Rebels can so exactly and singularly identify with.

Just as with the NCAA basketball tournament, there are four regionals, each of which contain sixteen teams. We're going to go regional-by-regional over the next few days and give you, the Friends of the Cup, an opportunity to debate, argue, scream, campaign, and choose who you feel should survive the first few rounds.

Here's how we're going to do this: comments threads. Just comment below as to who you think wins, oh, let's say the first two or three rounds of this regional. You could go game by game, you could pick out a few favorites, you could even, in great detail, describe how these theoretical matchups are won and lost. The idea is that, after getting y'all's input, we'll hopefull be able to whittle this thing down to something like an Elite Eight, after which we can implement actual polling. (Yes, we could technically do that now, but that'd require 63 separate polls. I don't wanna do it that way.)

Starting the madness will be the "Miscellaneous" region, the bracket of which is below. Click to biggify, and let us know who the winners are. Stay tuned for the "People," "Places," and "Food/Drink" regions over the next few days. And, please, don't hold back. 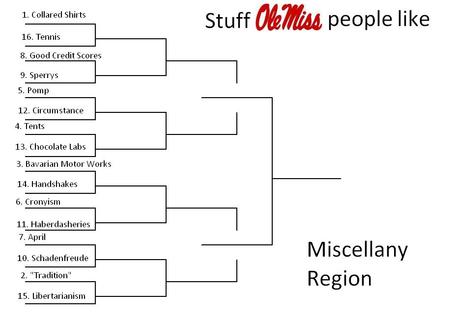 Explanations for each seed, as if they're necessary, are after the jump.