Share All sharing options for: RCR Baseball Preview--Can these arms reach to Omaha?

Here we are: year ten of Mike Bianco's quest to get to Omaha.  Throughout the years, we have had some pretty good arms come through the program.  Bianco has coached Stephen Head, Mark Holliman, Lance Lynn, Cody Satterwhite, Scott Bittle, and Drew Pomeranz.  Is there another Pomeranz on the roster?  While it is unlikely that we have a top 5 pick on our roster, I think we have some good arms coming in to anchor the rotation. 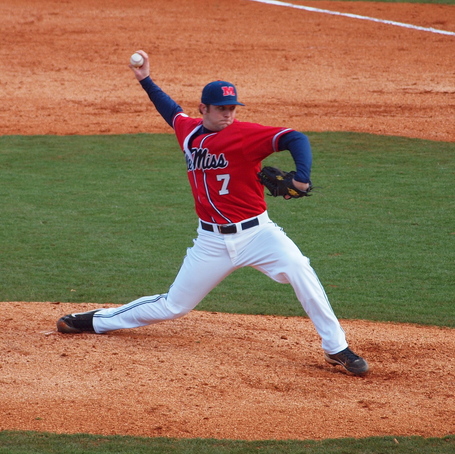 The word on the street is that David Goforth has a new cut fastball....

Last season, the Rebels had an ERA of 4.96 in 2010 after posting a 4.06 ERA while winning the SEC title in 2009.  Pitching started out strong early last season, but it seemed like no one but Drew Pomeranz or Brett Huber could get an out towards the end of the season.  Let's hope for a staff that can bring us closer to a 4 than a 5 ERA this year.

Matt Crouse transferred in last season from Young Harris College in Virginia.  The junior had a good sophomore season while posting a 3.74 ERA.  Bianco claims that he has been the most consistent pitcher over the last eight months and expressed a lot of confidence in him going into this season.  The southpaw's best outing last season was against 13th ranked Auburn in the SEC tourney in which he pitched four innings and struck out eight.

After posting a 2.80 ERA in middle relief in 2009, David struggled last season with a 9.43 ERA.  The right-handed flamethrower is bound to have a better year after developing a cut fastball in the offseason.  David did extremely well in 25 relief appearances in 2009, and after struggling early in 2010, Bianco moved him to a starting role.  He got his only win of the season in the Governor's Cup against MS State, but he never really put together a complete game after that.  Let's hope this season goes differently.

The 2010 squad never had a reliable Sunday pitcher.  Trent Rothlin, Matt Tracy, David Goforth, and various others tried filling in the third slot without any success.  This year, heralded juco transfer Austin Wright takes over.  The southpaw spent the last two seasons at Chipola Community College.  In 2010, he posted a 3.90 ERA and struck out 97 in 80 innings.  After being drafted by the Red Sox in the 23rd round last year, he decided to come to Ole Miss and improve his stock.

In 2009, Ole Miss' dynamic closer was Jake Morgan.  He racked up 9 saves with a 3.24 ERA.  Even more impressive was his 8:1 strikeout to walk ratio.  He had Tommy John's surgery and missed all of 2010 while rehabbing.  He is fully recovered, and Bianco has said that he will not be on a pitch count or any other special precautions.  Due to Morgan's injury, Brett Huber stepped into the closing role after Goforth struggled last season.  Huber, like Morgan, is right handed, and he is very good late in the game.  During his redshirt freshman season in 2010, he compiled a 2-0 record with 12 saves which was good enough to garner Freshman All-American honors.  Opponents hit only .216 off of him last season, and he had a 3.54 ERA.  From what Bianco has said, having both of these guys to close each weekend will be quite the advantage.  He does not see one as a set-up guy for the other.  Rather, he will use them as closers on alternating days.  Most college teams only have one closer and struggle when his arm is used up.  However, we'll have the luxury of always having a fresh closer.

Others... The players named above will be the main arms this season, but there are others with experience that will really help us out this year.  Trent Rothlin and Eric Callender return with a year of SEC pitching under their belts.  Matt Tracy is in his 4th year with the program, and he brings experience to the mound.  Newcomer Bobby Wahl should have the chance to work into the midweek rotation as the season goes along and may even work his way into weekend appearances.