Share All sharing options for: TLV #146 - What We Want for Christmas 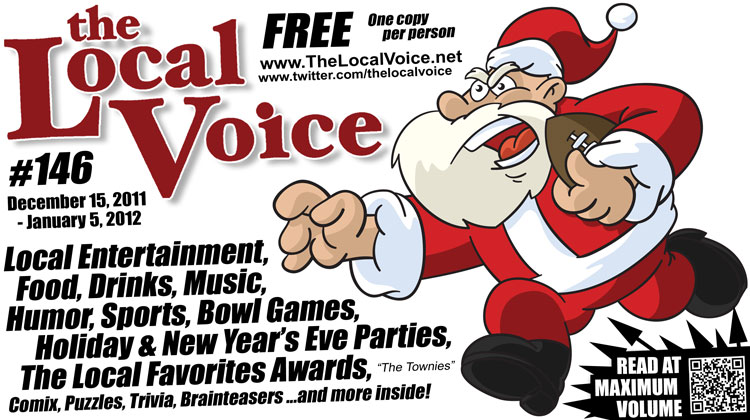 It's the most wonderful time of the year - aside from the week leading up to college football's kickoff - at Red Cup Rebellion, as we take time off from the drone of day-to-day life to eat ham and spend time with the folks we care about celebrating the things we care about. Yes, it's Christmas time, and aside from watching A Christmas Story on loop while in a hazy, eggnog induced stupor, nothing marks this season quite as well as the wishing for and exchange of gifts.

In this holiday edition of RCR via TLV, we'd like to share with you the gifts wished for by various Ole Miss Rebels and some of those our alma mater is associated with, even tangentially. Sorta. And by that I mean "not at all." These are jokes. We're not going to pretend to know these people. But you know you like Ole Miss athletics jokes, and you know you're not into heavy or layered reading over your holiday breaks. So sit back, fill your read cup with another stiff ‘nog, and enjoy.

First, the new Rebel football coach Hugh Freeze is dreamin' of a white Christmas because - wait for it - his name sounds like cold weather!

For related reasons, Whit Waide wants a sizzling hot Kenny Chesney Christmas in Ecuador; it never freezes, is far from Up North there and he's not afraid to bring back a good dose of malaria to prove his bulldog bona fides. Also, he'll likely need the assistance of a veterinary doctor upon catching some sort of parasite that typically manifests itself in horses.

But back to Hugh Freeze, he'd also like a book of Jerry Clower jokes, some sweet potato pie, a couple of Muddy Waters records, and really just as many folksy, homespun, Mississippian things as you can stuff in that there stocking, alright? He fits in with us, and we love him for that.

Andy Kennedy unselfishly wishes for the continued knee health of his players because he's got an NCAA tournament berth to finally earn (or he won't get a paycheck next year, right guys?).

Mike Bianco would like a similar reprieve from underachievement and finally take his baseball team to Omaha for an appearance in the College World Series. He also wants a name over which fans don't argue about pronunciation.

Dan Jones has wished for a reprieve from getting his name mentioned whenever a football player misses a tackle.

Houston Nutt wished for six million dollars. He got it. That's it, and no, it's not funny.

Over in Starkville, Dan Mullen has wished, repeatedly, for the Penn State job, but he's not begging or choosing at this point. "Is Arizona State taken yet," he's asked. "Arkansas State? Really anywhere more than a few hours' drive away from Oktibbeha county would be nice."

Plenty Rebels, past and present, were filling up their Amazon.com wish lists. Tyrone Nix has requested "How to Defend the Read-Option for Dummies;" Bradley Sowell is yearning for "Patience: The Art of Peaceful Living" by Allan Lokos; and Enrique Davis giddily awaits his copy of "Vision: A Computational Investigation into the Human Representation and Processing of Visual Information."

Les Miles doesn't just want some taffy this year. He wants ALL THE TAFFY THIS YEAR. He also wants several box sets of Power Rangers DVDs.

Ole Miss Men's Tennis Team has begged and plead for a hip dance party featuring LMFAO and the every type of hors d'oeuvres that Whit Waide would ridicule (which, if you call them by that name, is all of them). Also white shorts. And white caps.

The scholars and artists who operate The Local Voice would like for the jerks at Red Cup Rebellion to turn their biweekly column in to them in a far more timely fashion. This is, indeed, wishful thinking (sorry, we're bad about these things).

The Gentlemen Who Operate RedCupRebellion.com would like nothing more than a few handles of the world's finest brown liquors and maybe a few more of you all to log onto our little website and do us the favor of a bookmark. That ain't too much to ask, y'all.

So Merry Christmas, Happy Holidays, and a Happy New Year to you and yours from us at the Cup. 2011 was an excruciatingly eventful year in Ole Miss Rebel athletics; here's hoping to 2012 being just as entertaining and memorable.