Share All sharing options for: TLV #144 - For What Should We Give Thanks? 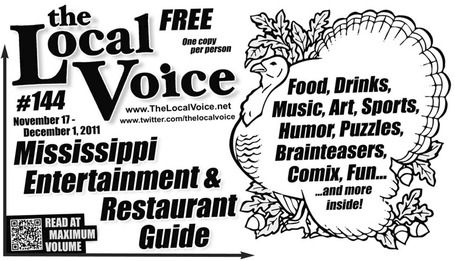 [ED: This was written by Ghost but published by me.]

This biweekly edition of Red Cup Rebellion via The Local Voice will cover two weeks which will most assuredly end poorly for those of us who are still brave enough to continue our support of the Ole Miss Rebel football team. This Saturday, the #1 ranked team in all of college football, the LSU Tigers, will travel to Oxford, uncouth and abhorrent fans in tow, and face a Rebel squad which has all but given up on the 2011 season altogether in the annual battle for an uglier-than-sin trophy for which nobody really cares all that much.

It won't be all that close, nor will such be all that surprising, but it will give us an excuse to continue to win the party, which is something to behold considering just how atrocious Ole Miss football has been.

One week removed from this inevitable disappointment, Houston Nutt's career as the head coach of the Ole Miss Rebels will take an appropriate end in the Southeast's coaching as our Rebs make the oft repeated and always regretted trip to Davis-Wade Stadium to face a Bulldogs team which will fight a full four quarters to earn Mississippi State's second bowl berth in as many seasons. And, as they hoist the Golden Egg high for the third consecutive time - a feat which hasn't happened since World War II - the few of us in attendance will wonder how, a mere three years removed from a 45-0 thrashing at the hands of Houston Nutt's first Rebels squad, things could have become so bad so quickly.

Such conjecture or speculation is not, however, the intent of this column. No, dear reader, I am going to insist that we worry about this another day and time, as these final days of the Southeastern Conference's football season are not ones to spend sulking, groveling, or asking why? No, friends, this is a time of thanksgiving.

So during this Thanksgiving week (and the weekend preceding it during which this fine paper chock full of original content will be distributed in and about Oxford, Mississippi), I ask that we take pause and remember exactly for what it is that we Rebels have to be thankful. Such is an act of humility and, honestly, a necessity because "wins and losses" ain't exactly gonna do it right now.

I'm thankful that every Ole Miss home game just so happens to be played in what is the South's greatest town: Oxford, Mississippi. I'm thankful that, upon my LSU game-eve arrival, I'll have the opportunity to dine on the finest culinary offerings of anywhere within a few hundred miles, swig finely prepared cocktails, and spend my evening with people who, like myself, are wordy, arrogant, and well-dressed.

I'm thankful to have, per many, the finest and most unique tailgating experience in all of college football to call our own.

I'm thankful to have football and baseball season to remind me that, yes, Ole Miss can and does beat other SEC teams in sports at things.

I'm thankful to have spent four years in a place that actually understands what good food, good writing, good music, good drink, and good friends are, and makes no attempt to hide the fact that it is able to boast the same in spades. Trust me, undergrads, when you graduate and move away from Ole Miss, you will fully understand what I mean by this.

I'm thankful that we've fired Houston Nutt from our head football position because, come on, that guy sorta lost his touch a year-and-a-half ago. I'm also thankful that we've decided to take a serious, deliberate approach to the hiring of his replacement.

And finally, I think we can all be thankful to have the pleasure of calling ourselves Ole Miss Rebels. I know, our football team ain't exactly something to hang our hats on at the moment, and I don't mean to get all Frank E. Everett on y'all, but there's just something about being associated with this school, this place, this idea that makes being an Ole Miss Rebel so wonderful to experience yet so difficult to comprehend from the outside. To the LSU Tigers we face this weekend and the Mississippi State Bulldogs we face the next, we're a bizarre, reprehensible, if not downright evil people; we are not them in the worst imaginable way. Yet, like the world-renowned troubadour Ke$ha once proudly proclaimed, "we R who we R," and how they feel about us and whatever it is that makes us such means nothing to me at this point.

So do your worst, LSU and State. Because we're still damn proud to call Ole Miss ours. And we've like, already fired Coach Nutt and stuff so, really, we're all just going through the motions at this point.