Our favorite friendly fanbase comes into town this weekend as Arkansas comes into Oxford for a rip-roaring good time. There are lots of good story lines surrounding this game that don't actually center on the football being played, but we all know about this madness, so I'm not going to touch it. I will offer one bit of advice for those who will be spending the weekend on the town: 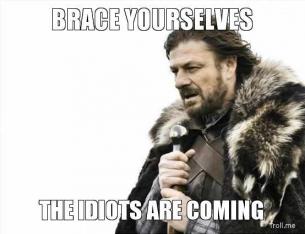 When the Rebels are on Offense
Randall Mackey is settling into his role rather nicely. Despite a tough outing against Alabama last week, Mackey is clearly the best option we have under center. Along with a healthy Brandon Bolden, this should be the best overall offense we've put on the field this season. However, considering our previous troubles scoring, I don't know how much of a difference this will make.

On the offensive line, AJ Hawkins and Alex Washington are back this week, though that doesn't actually improve the quality of the unit. There have been several articles regarding how excited Matt Hall is about this game. Honestly, I don't want to hear another word about our offensive line improvement until we can go one game without jumping offsides. It seems like every time we get in a crucial third-and-short situation, we get a false start. While you may ask, "Mexter, why are you dwelling on the false starts? Don't we have bigger things to worry about?" Well, kind readers, let me tell you why it's so troubling. False starts are the result of an unfocused unit. The key advantage any offense has over a defense is that the offense KNOWS WHAT THE PLAY AND SNAP COUNT ARE. Every time Sowell or Hall or Hawkins or one of those guys jumps the snap, I just wonder "What the fuck were you listening to in the huddle!?" Every game where we have players jumping offsides is one more game that I know at least one of our key units isn't mentally prepared to play football.

Our wide receivers are making steady strides to improve, but their performance is secondary to Mackey having time to release the ball. Arkansas' defense isn't the strongest unit, but they're certainly no pushover either. I think Jeff Scott stands a good chance to rack up some yards if he can get the ball in space because Arky's defense isn't anywhere near as fast as Alabama's.

When the Rebels are on Defense
Arkansas throws extremely well. They feature four future NFL wide receivers and the best quarterback in the SEC. The injury to Kniles Davis is still clearly cutting into Arkansas' running ability. However, it probably won't matter since they'll run a draw for 20 yards every other play.

While the injuries to Marcus Temple and Wayne Dorsey hurt, I just honestly don't see how much worse we can be on defense. Charles Sawyer will probably move back to corner with Frank Crawford and Damien Jackson filling in at the safety spots.

Mike Marry is still trying to recover from a foot injury, but he's a tough nosed player who will probably have 15 more tackles after spending 2/3 of the game on the field.

Generally
As is the case with most of our SEC schedule, we'll have to play our best game yet to pull out a win. While Arkansas' defense is slightly suspect, its offense is more than enough to make up for that. We'll need turnovers and time of possession in our favor. I do think we have a chance to run the ball with some success if our offensive line has any fucks to give.

Prediction
I think we'll put up more points than some expect. We may even be somewhat close at the half. However, I think our team's attitude is starting to mirror that of the fanbase: apathetic. I think we'll suffer from a serious loss of momentum in the third quarter as Arkansas cruises to a comfortable win, 38-17.