As oftentimes happens when fervent morons are presented with a way to communicate with total strangers with little consequence, mean and senseless things are oftentimes said over the Internet. And with few sites is this truer than Facebook (with perhaps 4Chan, with its blatant encouragement of self-mutilation and excessive use of the word "fag," being the king of online clownery), with half-acquaintances, family members, friends and enemies alike all tossed into one mixed bag and told to "go at it" with rhetorical tricks, embarrassing personal photographs, and compromising accidental confessions. There are online arguments, libellous accusations, and wildly paranoid claims all just sorta flying around out there, a few of which can actually impact one of Facebook's approximately one billion users.

One such user is Army All-American linebacker and highly sought-after Philadelphia, MS recruit, CJ Johnson. Johnson had, for a very long time, been committed to Mississippi State. Word had even reached this bloggeur that the young man had all sorts of Bulldog paraphenalia adorning his pickup truck. He was even reportedly recruiting against Ole Miss amongst his fellow blue-chip Mississippians.

Can't you just picture that?

CJ: If you sign with Ole Miss, I'm going to flatten your ass. You need to go to STATE (whoo, damn right)!
Other recruit: Ok. Please don't harm me.

Anyway, it seemed, even to us, that the guy was entirely Starkville bound. That all changed a few days after the Gator Bowl when Manny Diaz, the then-Mississippi State defensive coordinator, moved to Austin to take the Texas job. CJ wasn't thrilled with this and, as a result, de-committed from the Bulldogs.

What would ensue was, per the reports of many brave survivors, a violent, passionate online flame war, waged on the battlefield that is CJ Johnson's Facebook wall. For weeks, Rebel fans, Bulldog fans, and casual observers of free online entertainment squared off in a battle royale of misspelled, trite insults, undeniably rife with accusations of bigotry, elitism, hickery, and "being a poor."

The result, is after the jump.

CJ is quitting Facebook. He has had enough. He is annoyed and, as a 17-year-old from rural Neshoba County, would prefer to be left to his hobbies of driving his truck, fishing, and tackling Neshoba Central High School fans on site. (Aside: Philly High vs. Neshoba Central is a fierce rivalry, y'all. Definitely one of the best in Mississippi.)

We do not know what was said (because we don't stalk high school students on Facebook), but it seems that some Mississippi State fans crossed a line which we at the Cup would never dare one to cross; somebody said something regarding the mother of a country black man which wasn't overwhelmingly positive. That's not a "no no," that's an "oh HELL no," and we wouldn't be surprised of CJ Johnson were tracing IP addresses and seeking some sons-of-bitches out right now.

If it was you, you're going to need to flee. Stop whatever it is that you're doing and just go. We hear that Juarez is nice this time of year.

Anyway, CJ's pissed, and rightfully so. He was annoyed and probably insulted to a point which is unfair to anybody, especially a promising young athlete whose only "crime" was reconsidering his plans to play football in Starkville.

CJ, we at the Cup would never besmirch the name of your dear mother, nor would we dare harrass you over any social networks. We're fine people in Oxford and, please, allow me to reassure you of this fact. You see, we... 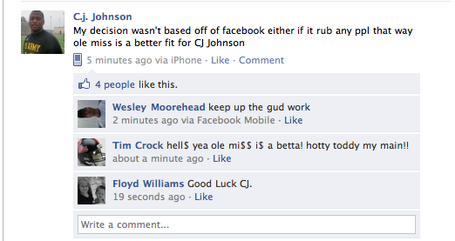 Yeah, yeah, yeah. Nothing's official until signing day, but the Schadenfreude we're tasting right now - it's so sweet, so savory, and so very filling.

HT: CaptainMcInnis via the Twitters.