Since April of 2008, the Cup has been a more-or-less open forum for anyone to discuss, technically, anything. Sure, our posts and ruminations guide the discussion per this website's obvious design and purpose, but we haven't been ones for censorship. We have only deleted comments which were either spam- I doubt anybody here wanted discounted Nike Shox anyway - or wildly offensive (there was maybe one comment ever that qualified as such.), and only took the time to actually ban spammers.

I recently spoke with a blogger for another SEC-related site. This is a guy who I've never met in person and only briefly spoken with online, but he is still someone whose opinion I respect greatly. He is older, far more mature, more observant, and more collected than yours truly. So when he told me that our site is becoming a bit unbearable, that struck me. I snooped around a bit, solicited some opinions, and even compared what was going on around here one year ago to that of today. It was not hard for me to also conclude that the "discussion" around here has been on a bit of a downturn for the past few months. Our tolerance for idiocy has come back to bite us, and not in an "oh wow the Arkansas fans visited this week" kind of way. It has gotten bad. We're taking on water here, folks, and I'm not gonna let this poorly-constructed ship sink.

Anyone who has been a regular participant in the goings on of the Cup for at least the better part of this last year knows that the overall decorum, wit, and intelligence of the fanposts and comments threads have been deteriorating something fierce. This problem isn't, unfortunately enough, limited to fans outside of our Rebel base either. Sure, it's mostly Arkansas fans, and y'all knew that anyway, but now State fans and even our own Ole Miss friends in arms are showing up and making complete asses of themselves. We're going to counter this by setting some guidelines, calling people out when they treat those guidelines as flexible (or disregard them altogether), and then not-so-politely toss them when they get to be unbearable or annoying.

Follow the jump for condescending screen-caps with MSPaint instructions, along with some "suggestions" for Red Cup Rebellion decorum.

You're all familiar with the comments threads and how they work by now. What you may not be familiar with, however, is the flag button. First, click the "actions" button under a comment, allowing that menu to expand. In that menu there are the Rec and Flag buttons (and, for me, the Delete and Hide buttons). Open up actions, and click Flag.

You can flag a post for one of three reasons: spamming, trolling, or inappropriate commentary. When you click flag, a dialog box will pop up on your screen asking for you to select one of the three reasons you're flagging. You may also leave a note to us administrators as to why exactly you're flagging something. 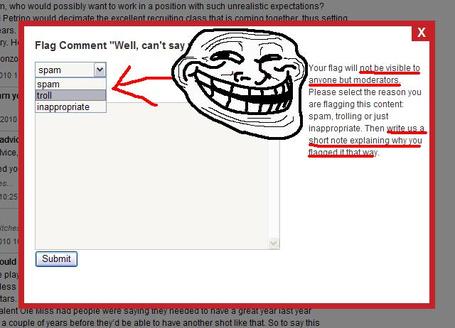 You can write whatever you'd like but, if you're really trying to get someone tossed and their comments deleted, be persuasive. Use examples and don't hold back. What's below isn't so much an example of that, but it's an honest opinion by golly. 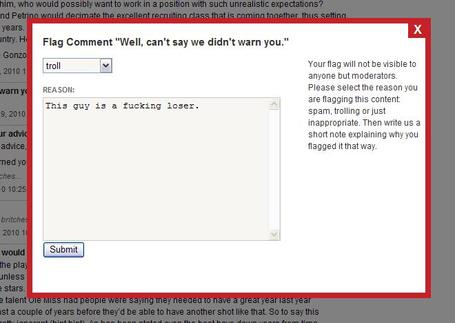 When I, Juco, Ivory Tower, or any of us log into the Blog Administrator's dashboard, we can see who and what posters and comments have received flags. It looks something kinda like this:

Oh, looks like some of y'all have already figured this out. Well done. Anyway, there's my flag. See it? If I click on it in our little dashboard, a window looking like this opens...

...and the message written is prominently displayed. I don't so much need specifics as to why someone's annoying you, but it helps. If the person is an ass, say so. If the comment itself is shockingly offensive, then say so (if need be, we can simply delete individual comments and leave the commenter alone).

Full disclaimer: I have no idea who "this guy" is in real life, nor do I really care. He could be a fine, upstanding son-of-a-bitch for all I know. That doesn't exclude him from, in this particular context, being a "fucking loser" as I so eloquently had it put. Signing up for a website to e-wave your e-ass in peoples e-faces, especially when you're something like, I dunno, the 300th person or so to do it, is pathetic. It's even more pathetic when one thinks they're being clever or original when they are, in reality, doing nothing outside of reducing the decorum and collective IQ of the place.

If you'd like to be treated with more respect, keep the following in mind:

Long-time readers of the Cup, we need y'all in on this more than anybody. Y'all do not need to hold back. Do what y'all can to sort of "police" the comments threads. We do trust your judgment very much and, in some ways, even more so than our own. Y'all know how this place is supposed to work; help us get it back there and keep it there. And if you're wondering to yourself, "is he referring to me", then the answer is most likely "no". If you're new-ish here, that's great, we're glad to have you. But this site, like many of this particular breed, takes some time to fully get a hold of; you'd be doing yourself some good if you spent more time observing than participating (still, if you've got something to say, then say it, I suppose).

Like Jon Stewart, let's rally to restore (a little) sanity. Let's bring our comments threads back to where they once were as well written, snarky, astute, and heated discussion threads more than worth the lost productivity we've all racked up while reading them.