For those who Tweet, a quick update as to whom you should now be following. Drew Pomeranz just joined Twitter today so be a good Rebel and give him a follow @DrewPomeranz. His first tweet? 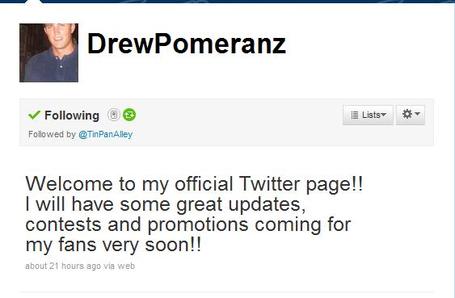 Seems fun enough, so I'll be on the lookout for those contests and promotions, so long as I don't have to cheer for the, ugh, Indians...

Cordera Eason and Kentrell Lockett had some commercial related chitter chatter via Twitter over the past weekend. First, Cordera Eason's tweet from last night that, wow, if this doesn't make you laugh then you haven't a Rebel bone in your body.

I'm still laughing. If the term "poo ass" alone doesn't make you laugh, then you're a terribly boring person and shouldn't be wasting your time 'roud these e-parts. And the fact that Eason, a backup tailback for all four of his Rebel years, is still invested enough in the Egg Bowl rivalry to talk Spirit-esque commercial shit warms my heart just a little. Keep on hatin' Cordera.

Here's OleForty's tweet on the Ackbar spot featured on ESPN during the VA Tech Boise game:

I didn't understand that commercial about Admiral Ackbar.... They need to play it again....
9:32 PM Sep 6th via Echofon

There wasn't much to get, OleForty, but your boy Cordera's got a bit of a quip for you.

@OleForty that commercial was debating on Wheter it should make u or ackbar the mascot.
9:43 PM Sep 6th via TweetCaster

Kentrell Lockett as mascot? Yes please. I'd love a dreadlock-clad, shit talkin', quarterback rushin' fiend on the sidelines at all times mocking people for being obese and poorly dressed. Quick, some more OleForty wisdom:

He must have seen Ivory Tower walking around campus after the game. /bloggeurzing'd

So we are watching Wishbone in class...
9:12 AM Sep 8th via Echofon

Whatever hugnover graduate student teacher's assistant is too lazy to properly teach OleForty the highs and lows of Great Expectations deserves to be fired. Now. OleForty demands his literature be taught properly, with dignity for the craft and an appreciation for the timeless quality of the medium, sir or madam!

Ole miss is full of characters
10:09 AM Sep 7th via Echofon

Which is exactly why you fit in oh so well, Kentrell. We lurbs you here at the cup. Lurbs, son. That's real.

Patrick Willis was apparently hungrier than Hell not so long ago.

I'm in the mood for popeyes chicken and biscuits with that hot sauce.
8:58 PM Sep 8th via ÜberTwitter Retweeted by 14 people

"That hot sauce," sir, is Louisiana brand sauce, and it's damn fine and far better than Tobasco (and just a shade below Crystal). And were you to order from a Popeyes under my management, you wouldn't pay for anything. In fact, I'd give you $100 dollars right out of the register and say "holy shit, thanks for like, speaking to me and stuff dude, wow... So, how many drumsticks?"

But Patrick knows that, to stay in tip-top quarterback thrashing shape one must eat right.

I might just settle for sushi instead. Cuz ill feel bad after I eat that friend chicken but dang I love fried chicken tho. Ughhhhhh
9:05 PM Sep 8th via ÜberTwitter Retweeted by 9 people

Popeye's is a bit crippling, so I understand you there P-Willie. Also, I highly doubt there's a damn Popeye's chicken in San Francisco. Which presents Willis with a bit of a quandary; if one wants fine fried chicken, but cannot find a restaurant at which to purchase it, how might one procure his crispified bird?

Any good personal chefs in san jose, Santa Clara, mountain view, Cupertino or los gatos.
about 18 hours ago via TweetDeck Retweeted by 2 people

You hire your own damn chef, apparently. Holy shit, I stood next to this guy once on campus as a peer of his just a few years ago. He grew up in destitute poverty that my lilywhite suburban self can never comprehend. And now he's hiring personal chefs to do his bidding and living his life in the bay area, likely using his 99OVR rating in Madden 2011 to talk shit to ne'er-do-wells/pick up droves of women. Get money, get Madden, get chicken, and get yourself a chef P-Willie. The life you live couldn't happen to a better person, for sure.

And, for one last laugh, here's SummerofMallett:

Playing in Little Rock this weekend. Gonna stop by the Clinton library with a couple of skanks and a box of cigars. Whatever happens happens
11:09 AM Sep 9th via TweetDeck