Share All sharing options for: I Regret To Inform You That These Recruiting Stars Might Have Some Credibility

People who have watched "Rudy" one too many times will tell you that these recruiting services and their rankings have all the credibility of a congressional budget (those things should be passed on April 1 every year because if you can't have good government, you ought to at least have funny government).  Of course, they only maintain their Scout Independence until the Rebels start beating State by every objective measurement.*  For the most part, though, whether a disciple of the Chuck Rounsavilles of the world or not, these people just get gig-giddy for the unheralded recruit.

The anecdotal evidence is difficult to ignore for Ole Miss fans.  Too many Robert Lanes, Brent Schaeffers, and Enrique Davises** have passed through Vaught-Hemingway Stadium, while Patrick Willis and Dexter McCluster have either removed the "un" from their "heralded" by sheer force or just out-run it.  Does this anecdotal evidence stack up against the hard facts, though?

Unfortunately, it does not.  At least, not when one is comparing units that battle each other between Manning Way and All-American Drive.  For example, if one were to ask us which unit will be the best for the team in 2010, we would get little argument if we responded, "the defensive line."  And, apparently, so would Scout.  Check out this little chart showing the average "stars" for both the starters and starters plus reserves: 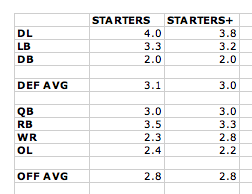 In compiling those numbers I used players who are projected to start for the "STARTERS" column.  For the offense, I used a quarterback, two running backs, a tight end, two wide outs, and five on the line.  For the STARTERS+ column, I just added in players like D.T. Shackelford or Rodney Scott, who will likely see significant playing time.  For the three players who will start or receive significant playing time that did not have a Scout rating (Marcus Temple, Fon Ingram, and A.J. Hawkins), I used a value of "1."

While anecdotal inconsistencies are a reality (Lionel Breaux and his four stars are probably not starting; Jesse Grandy out-ran his other stars and, consequently, only has two), those things seem to average out on the macro level.  In comparison with the rest of the team, the defensive line wins both in stars and in reality.  Our units are lined up in this order:  Defensive Line, Running Backs, Linebackers, Quarterbacks, Offensive Line, Wide Receivers, and Defensive Backs.  Except that the defensive backs are, probably, not the worst unit on the field, that pretty well hits the nail on the head.

What does all this mean?  Well, first, despite some optimism about the defensive backs, potentially, playing up, that unit is probably going to continue to be a question mark, so long as the players that compose are the least highly touted on the team.  This is not my way of criticizing our recruiting efforts; in truth, Coach Orgeron sort of forgot that cornerbacks existed while he was out of those amphetamine-fueled recruiting frenzies that (considering what looks like it's happening to Tennessee) I am Neanderthal jaw-dropped shocked did not turn into a post-season ban for us.  I am, however, just observing that - if they stay - a recruit's stars (and, by extension, the average stars for a unit) are a pretty good predictor of on-the-field success.

*More on that later, I swear.

** If that man proves me wrong in Year 3, I will, literally, eat my words by printing out everything bad I have ever said about the man and ingesting it without the benefit of gravy.  If he rushes for 1,000 yards as a Rebel, I'll even pray that God gives me paper cuts in my esophagus.