TLV #112 - Jeremiah Masoli is Bringing the Whole Bar With Him

Share All sharing options for: TLV #112 - Jeremiah Masoli is Bringing the Whole Bar With Him

In this week's The Local Voice we brought you Part IV of our six-part football season preview for them.  In keeping with the media consensus of the month, we're all about Jeremiah Masoli. 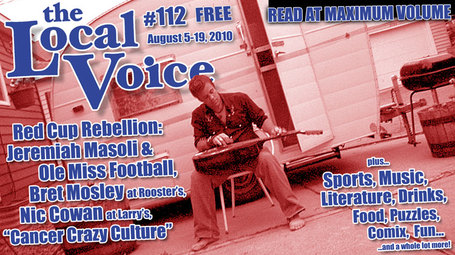 Click the picture above to download the PDF or find the rest of the article by HTML after the jump.

If Rebel fans, who parlayed their winless 2007 season and pre-2008 expectations into an exhilarating Cotton Bowl campaign and, subsequently, parlayed that season and pre-2009 expectations into a somewhat deflating Cotton Bowl campaign, needed any more proof that any predictions made about SEC football before, oh, Thanksgiving stand a solid chance of being proven spectacularly inaccurate, they got it, when they replaced their Heisman candidate quarterback from an out-of-conference power with another Heisman candidate quarterback from an out-of-conference power.  And this time they did it a week before Fall Camp opened.  And, thus, to the ashes go both, potentially, the media predictions that Ole Miss will finish last in the SEC West and, definitely, the Cup’s well-conceived plan for a six-part season preview matching preview subject matter with an appropriately themed drink.

No, while, this was the week that we hoped to acquaint you with the Special Teams and their proper potent potable, we must instead give the masses what they demand.  More Masoli.  Here’s your primer (and beverage menu) on Masoli, answering all your questions about the new quarterback, including, for you State fans, what ethnicity he is (we know you’re just dying to know).

Didn’t I read something about Jeremiah Masoli raping babies and worshipping Hitler and Obama?  Yes, but only if you’ve been reading the Clarion Ledger’s online comments section.  In reality, Masoli has a checkered past.  Those checkers are two different times he decided to take things that didn’t belong to him and a misdemeanor charge of marijuana possession.  I am not defending the guy, but let’s think on a utilitarian level here.  If Jeremiah Masoli balls out for Ole Miss in 2010, he is way more likely to make it to the NFL, where he will make boatloads of money, some of which he will have to give away to charity in order to avoid a P.R. nightmare.  There’s an outcome that does not hurt anyone, right?  Any time you can give somebody another chance – whether they deserve it or not – and nobody is likely to get hurt by it, what’s the big deal?  So, we have decided that the self-righteousness some people have when it comes to Masoli is a lot like O’Doull’s – it ain’t got much to back itself up.

How would you describe Jeremiah Masoli’s playing style?  There may not be a quarterback in Mississippi history that really compares.  The uninformed might be thinking Brent Schaeffer, Chris Relf, or Wayne Madkin, but none of those guys have the same combination of width (about 220 lbs.) and height (5’11") as Masoli.  Oregon fans tell us that Masoli will be at times exciting and then frustrating (that doesn’t sound familiar at all!) as a dual threat quarterback.  So, keep that in mind when we say that … he might be a little like Darren McFadden.  No.  Stop.  Keep those expectations down.  We simply mean that Masoli is, truly, a tailback, but he has enough game-sense and arm that it is just dumb not to use him at quarterback, where he can keep defenses guessing.  The quickness with which he went from being the transfer at the far end of the bench to running Chip Kelly’s offense effectively is also an encouraging sign.  If we were using a drink to be a symbol of Jeremiah’s playing style, we’d say Everclear.  You know why we like Everclear?  ‘Cuz it’s faaaaast.

Aren’t there more important things – like the mascot – to be talking about?  No.  Who asked that question?  You get Club Soda.  Go sit with the old people.

What does this mean for the Nathan Stanley?  Way too early to tell.  Houston Nutt has been talking with surprising forthrightness about Masoli being on a "short leash."  We think that might be a calculated move to prepare the fan base if Masoli does not immediately play a lot.  With the back-loaded schedule, it seems safe to say that the starting job belongs to Stanley until he throws that really dumb pick that puts us down by 14 to Fresno, Vanderbilt, or Kentucky.  Maybe that won’t ever happen, but quarterbacks inevitably make mistakes.  We just think Masoli will not get his chance until Stanley errs, but if Stanley’s error puts the outcome of a game in doubt, we think that it may be Stanley who is, in fact, on the short leash.  The wait before Masoli gets his shot might be a lot like an Irish Car Bomb – don’t wait too long or it might make you sick.

There it is.  Maybe not all you would want to know about Masoli, but that’s all we could fit in, what with the booze jokes.  Maybe you don’t like the booze jokes.  But, that probably means you aren’t thrilled about Masoli being a Rebel.  We are.  We think Houston Nutt is smart enough to think about all the advantages and disadvantages of giving Masoli a chance.  We hired him to rebuild our program.  We do not think he would intentionally or negligently destabilize it for the long term.

Oh, yeah, and he’s Samoan.  But he was born in San Francisco, so that FOIA request for his birth certificate is just a waste of time, Dan.