TLV - This Was Supposed to Be Posted 2 Weeks Ago

Share All sharing options for: TLV - This Was Supposed to Be Posted 2 Weeks Ago

I forgot to post our TLV article from a few weeks back that finished the drink to unit of the team correlation. I'm posting it here, and the new article will follow shortly. 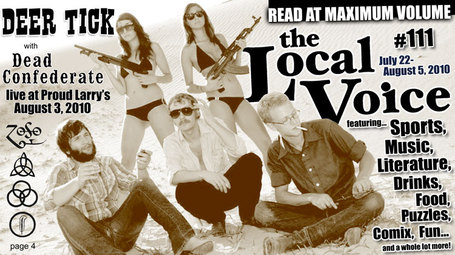 Having already talked about the offensive and defensive units of the 2010 Rebel football team, it’s time to discuss the third element, an element about which no one ever talks. That’s right... the kicking game! Yay! In the third part of this alcoholic series of articles, we’ll compare the special teams unit to a very special type of liqueur.

But first, a brief story. A few months ago, my wife and I went to a relatively upscale restaurant in our city. I ordered bourbon with two cubes of ice. She ordered some drink with this particular alcohol. When the drinks were brought out to us both, mine was simply in a short "old fashioned" glass. Hers was in a martini glass with a blue carnival-like glow stick dropped into it. I laughed at my silly, silly wife. Why had she ordered such a ridiculous drink? She pulled the illuminous stick out and began to drink her cocktail. She offered me a sip. Looking around to ensure that no one was watching, I took one. It was delicious. That said, I’ll never taste it again. That story exemplifies why this particular drink is equal to the little brother of the football team.

Yes, the special teams unit is comparable to (drum roll) Hypnotiq! WOO! PANAMA CITY! YEAH! Let’s look at the reasons this aspect of our football team relates so well with such a non-traditional form of alcohol.
First, it’s young in relation to every Southern man’s favorite drink, whiskey. Yes, while whiskey (in its earliest form of Scotch) has been around since the eleventh century, Hypnotiq has been around since…. 2001. Funny story actually. In the true spirit of the alcohol, a college dropout was living alone with his parents at the time and noticed that a blue, iridescent perfume had become quite popular among girls he knew. He decided to create a blue liqueur to take advantage of this colorful attraction. The new concoction sold like wild-fire to many clubs in the area and quickly became a national phenomenon. Well, in that same vein, the Rebel special teams are quite young. Sophomore punter Tyler Campbell, sophomore kickoff specialist Andrew Ritter, sophomore returner Jesse Grandy, and sophomore kicker Bryson Rose comprise a talented group of players who were all freshmen last year and have starting jobs now.

But also, like Hypnotiq, these youngsters pack some punch. Campbell averaged 44 yards per punt last season, good for second in the SEC. His long of 71 yards is simply incredible. Sure, the ball rolled a bit, but Campbell helped us improve our field position against the Alabama Crimson Tide at a time when no one else could. Ritter sends a good number of his kickoffs out of the back of the end zone and doesn’t struggle much with accuracy when kicking off of a tee. Last year,  despite handling kickoff duties all year, he only kicked one ball out of bounds. Considering the strength of his leg, that’s an astonishing statistic. Grandy ranked 30th in the country in kick return yardage and took two kickoffs all the way. Not bad for a freshman, eh? Bryson Rose is a bit more of a question mark since he didn’t play last year. He did compete with Ritter for a few practices at kickoff specialist, but Ritter’s leg was simply too strong. Rose may not win the starting placekicker job, but it appears right now that he has the lead over the cannon-legged Ritter. It should be a good battle to watch into the season.

More than anything, just like special teams, you look like a weirdo if you’re a guy who likes Hypnotiq. Even though you respect its strength and taste, you wouldn’t be caught dead talking about it with friends. Thus goes the Rebel special teams unit. We know they’re good, but we have to look "hard" in front of everyone else, so we make fun of kickers and their contributions. A reader on our site recently suggested that Tyler Campbell may be our MVP for the upcoming season. While he will definitely contribute a great deal, there’s no chance Ole Miss fans would agree with that. I mean, he’s a punter, right?

So once in a blue moon or in a desperate pinch, don't be afraid to whip up something silly and unorthodox with some Hypnotiq. Sure, you'll get laughed at for being a sissy fruity pansy pants. But you know you like it, and you know it's worthwhile (note: it's not, we're just maintaining an analogy here), so enjoy your drink and tip your hat to our Rebel special teams. For they, like Hypnotiq, deserve our tongue-in-cheek praise.