ROTD: 'Bout Time to Knock That Out, Huh?

Share All sharing options for: ROTD: 'Bout Time to Knock That Out, Huh?

After of summer of comparing the legacies and careers of great Rebels from the last decade, it's down to four. Look away now if you're hoping for a little assurance that Ole Miss fans give a rip about anything other than football.

We gave you an option back in the beginning of August about how this would all end. In a pretty close vote you chose to have a WWE style four-man match for all the marbles*. This option, thankfully, beat out a "re-bracket" scheme that would have required us to put forther way more effort than that with which we are comfortable. We have a certain "slacker chic," and that would cut into our NCAA '11 time.

We tossed around the idea of including in the end a true** Rebel that probably should have made it into the the bracket somewhere: 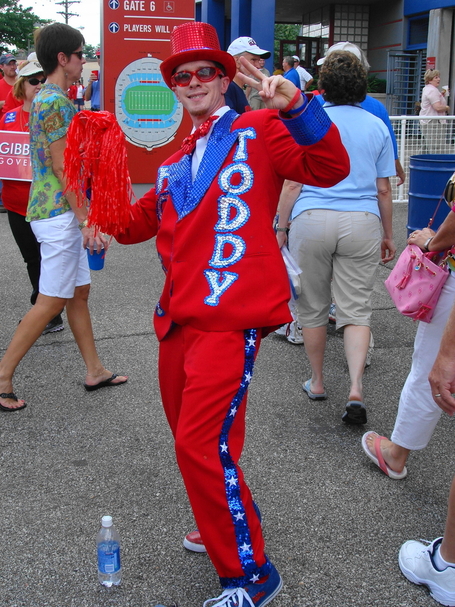 I'm Hotty. You'll never guess where Toddy is. HE'S IN MY PANTS!

*RCR specifically disclaims that any marbles will be awarded.

**RCR specifically disclaims any warranty that Hotty Toddy Guy aka "Mr. Sparkles" is, in fact, a true Rebel and not an artist rendering of mascot option #8, "Mouthbreathing Assmuncher."