One of the sobering realities of post-college life is that your friends, once concentrated within reasonable geographic boundaries, tend to disperse themselves all over the damned place, forcing you to once again establish new ties in a new hometown, making friends by testing your awkward and/or inappropriate jokes out on crowds of relative strangers. The Red Cup crew certainly suffered this fate for a while, but for now at least, three of us live within one city's limits. To tide us over during the Rebels' non-sports season, Ivory Tower, JUCO, and I have decided to take advantage of our close proximity to write about culinary delights.

As a child, I loved when my parents would take me to Morrisson's Cafeteria, one of those places where you pass through a school lunchroom style line and pile "home cooking" items on top of a pentagonal plastic tray.  Any child's favorite part of this excursion was the loose definition of "vegetable."  Unlike the kind of "home cooking" that was actually cooked in my home, when we went to Morrison's I could load down on comfort food, eating a whole meal without taking one bite of anything that had grown out of the ground ... unless, of course, I wanted french fries.  And the only green in sight would be the envious faces of children with forward-looking parents who made them begrudgingly eat some produce at this cornucopia of proteins, carbs, and dairy products.

It's no coincidence, then, that a day or so after this edition of Cooks, I found myself acknowledging that I had to watch my calorie intake a little more closely.  You're looking too thin, baby; we gone fatten you up after the jump. 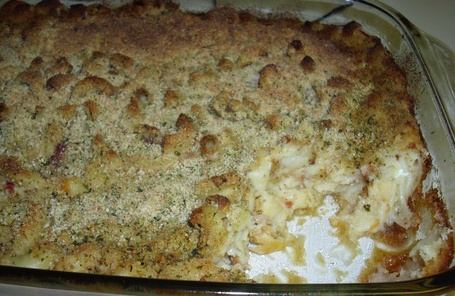 If you really want to understand the down-home decadence of this meal, you need to see this traditional dish spruced up with something a little different than 2% milk and powdered "cheese."  I can only imagine one way that this could possibly be better.  More of you know what.

Preheat the oven to 400 degrees F.

Place a baking rack on a sheet pan and arrange the bacon in 1 layer on the baking rack. Bake for 15 to 20 minutes, until the bacon is crisp. Remove the pan carefully from the oven - there will be hot grease in the pan! Transfer the bacon to a plate lined with paper towels and crumble when it is cool enough to handle.

Drizzle oil into a large pot of boiling salted water. Add the macaroni and cook according to the directions on the package, 6 to 8 minutes. Drain well.

Meanwhile, heat the milk in a small saucepan, but don't boil it. Melt the butter in a medium pot and add the flour. Cook over low heat for 2 minutes, stirring with a whisk. While whisking, add the hot milk and cook for a minute or 2 more, until thickened and smooth. Off the heat, add the Gruyere, Cheddar, blue cheese, 1 teaspoon salt, pepper, and nutmeg. Add the cooked macaroni and crumbled bacon and stir well. Pour into 2 individual size gratin dishes.

Place the bread slices in a food processor fitted with a steel blade and pulse until you have coarse crumbs. Add the basil and pulse to combine. Sprinkle the bread crumb mixture over the top of the pasta. Bake for 35 to 40 minutes, or until the sauce is bubbly and the macaroni is browned on the top.

We were all big fans of this "grown up" version of a kid staple.  The more mature cheese like gruyere were subtle but sophisticated.  Also, they leave some room to make this dish your own by replacing them with stronger or sweeter cheeses that suit your tastes.  The bread crumbs on the top were a crunchy pseudo-crust that added variance to the texture.

For the entree, I worked up an old staple employed by social security beneficiaries fresh from the beauty parlor across the great region.  Chicken and Dumplings is not the first dish that the independent male learns to make during that period of bachelorhood before he finds a suitable mate to install in her natural habitat.  But, as an entree, it's filling, cheap, basically composed of ingredients you already have, and something a little different from that rotation of "chicken, pasta, chicken and pasta, eat out" that you've been employing.  Bask in its simplicity:

Pre-cook the chicken.  You could slowly cook a whole chicken in salt water to make your own broth, but that seems a little inconvenient if you have a job that won't let you get home until right around supper time.  You could section the chicken and roast it, but that also takes about an hour.  I just sauteed boneless, skinless breasts in olive oil on medium, which took about 20 minutes.

Meanwhile, I melted a cup of heavy cream and two tablespoons of butter.  After it cooled a bit, I mixed it with two cups of flour, a tablespoon of baking powder, and "Cracker Boy Seasoning," by which I will swear.  If, after mixed together, the dough is more crumbly than doughy, add water until it binds together like bread dough.  Roll it out cracker thin and cut it into squares or strips.

In the bottom of your large part or dutch over, sautee three cloves of finely chopped garlic, one medium chopped onion, and some chopped carrots (or celery, or both, or maybe even green beans).  After two or three minutes, add your broth.  If you make a pretty big pot, you're going to need about a half gallon of broth.  However you've prepared your chicken, shred it and add it.  Add the dumplings.  Let it simmer all together for about 45 minutes.  Add flour to thicken.  Add spices to taste.  After it was all done, I added some paprika!

I thought my chicken and dumplings were spectacular.  Roasting the chicken, though, might have made it a little more tender.  Slow cooking a whole chicken to make your own broth has got to be the way to go, but the hour and a half it took for me to prepare this dish was about as long as I am willing to spend after work.  If you prep your chicken ahead of time, this should all take less than an hour.  Prepping the dumplings is only about a ten minute job.  Here's what it looked like in the pot: 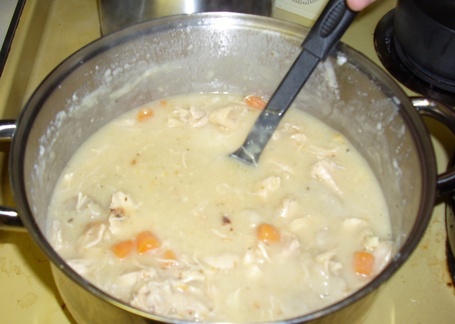 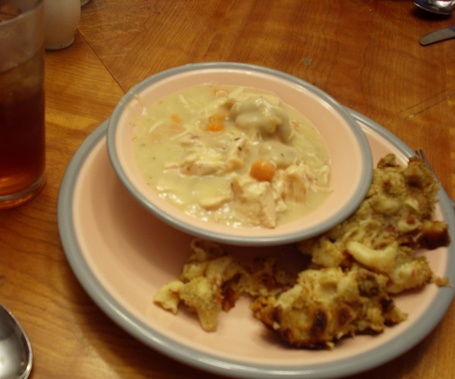 Sorry about the lighting, you camera nazis.

For desert, Whiskey made sophisticated, light stuffed strawberries, which were able to masquerade about as "healthy."  Like its main course counterparts, it is startlingly simple.  Scalp the strawberries and hollow them out.  Use a small stirring spoon to fill them up with something.  "What?" you ask.  Well, just about whatever sounds good.  Whiskey just mixed soft cream cheese and sugar.  You could make that same concept a little lighter by adding some whipped cream and pre-dissolving the sugar in lemon or lime juice.  Or you could just buy a small tub of ready-made frosting of your choice.  It's not rocket science, but presentation is pretentious as hay-el: 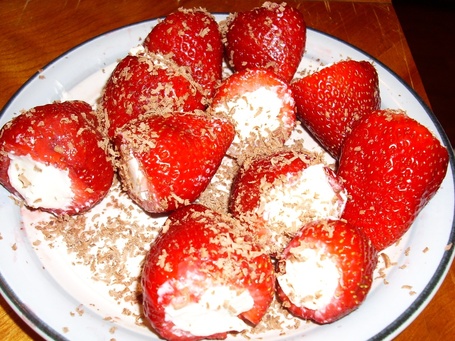 Karl Marx actually painted this picture a hundred years ago and entitled it "Why Decadence Might Not Be So Bad."

That stuff on top?  That's chocolate shavings.  Did I mention that your friends are just crude neanderthals that wouldn't know fine food if it turned their doo doo gold?

And we washed it all down with 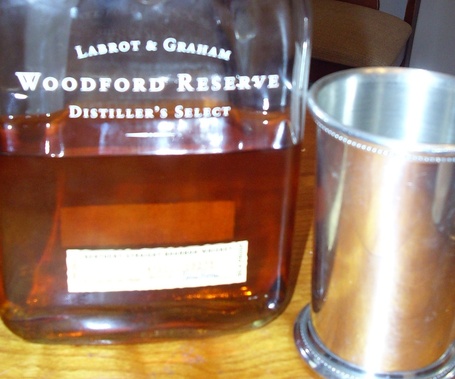 I don't frequent Cat's Wine & Liquor in Jackson because they rarely have the $8 whiskey (filtered with "Best Bargain" charcoal!) on which I have built my reputation as an old curmudgeon who plays like he has more expensive tastes than he really does.  But when they put Woodford up for the price that JUCO bought it, I have respect for them.  JUCO makes a mean mint julep, which, if you allow its silky smooth texture to hold too much sway over your decision-making skills, can turn you more cross-eyed than the College of the Sequoyas alum from which JUCO gets his pseudonym.  A drink like a mint julep, doesn't have a "recipe," so much as a method.  And JUCO is very specific about some things:

1) I lightly muddle 2 mint leaves in the bourbon in each julep cup before adding the ice and simply syrup.
2) While making the simple syrup, I put a few sprigs of mint into the pot.

No doubt the fine bourbon with which it was made contributed to the pleasantness of this drink, but I will chalk some of it up to the craftsmanship of the maker.  It's the little things that make all the difference.  And hello, baby: 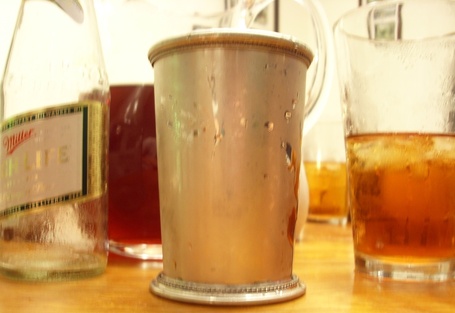 With the summer winding down, we aren't sure how many more times we'll tell you about it after we get together and cook.  We might be planning one or two more (and will, no doubt, give you a culinary review any forthcoming Red Tent Rebellion).  But if this is the way we go out, I am satisfied.  And full.