When I submitted this to TLV, I half-heartedly said "a picture of Houston Nutt wearing a sombrero would be nice for this." They came through, and of that I am pretty danged pleased. So grab yourself a print copy or click the cover art below to get a peek at that. Otherwise, click the jump to read the fifth installment of our six-part season preview. 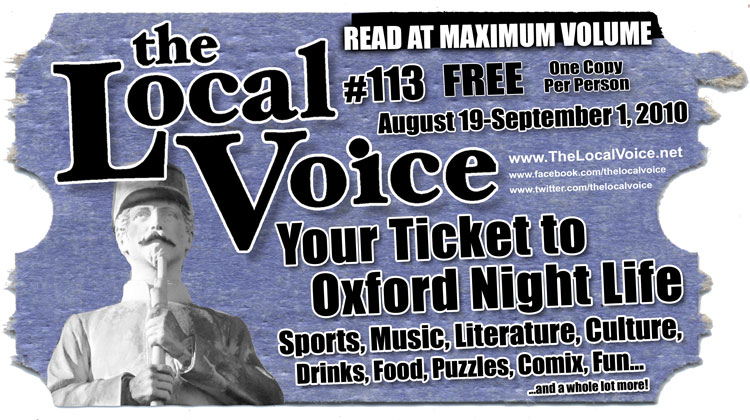 If you have been keeping up with this, our six-part, booze-themed season preview - and you have been keeping up, right? - you have read us rather poorly compare various elements of the Rebel football team to what we deem to be appropriate liquors. Sure, our offense is a bit bland like cheap bourbon, as we asserted in our first installment, just as Jeremiah Masoli hit our football program as suddenly as a shot of everclear hits your gut, per our most recent installment; but those are merely approximations. This installment of Six Drinks: One Cup, however, takes hold of that there metaphorical hammer and whacks it firmly and squarely on that there metaphorical nail, because this installment argues that Ole Miss Rebel head coach Houston Nutt is no different than a bottle of tequila.

Distilled from the mysterious and otherwise useless blue agave plant, tequila is the fuel of Saturday night's excitements and Sunday morning's regrets. It is a liquor that is loved universally, albeit with caution, for its absolutely inexplicable propensity to make those who partake in it feel superhuman or, at the very least, unflappable. As any college sophomore can tell you, any poor decision can immediately have judgment thereof withheld if said decision's explanation is accompanied with "so I drank some tequila, and..."

This is no different than the effect Houston Nutt has, not only on his players, but on the fans of the teams which he coaches. Called the "Right Reverend" by many and chastised seemingly without mercy by his home-state Razorbacks for being too much of a "rah rah" type head coach - meaning that he is more of a "motivator" than an actual "coach," in the Natural State's dialect of English - Houston Nutt is known for his ability to mysteriously give his players a reason to believe in themselves. His players are inspired and, even against superior talent and coaching, play with a reckless abandon sprinkled with swagger.

This is no different than that time your buddy, drunk off of tequila, tried to jump off of a Cabo balcony and into a perilously shallow pool. He survived, against all odds, in a way reminiscent of the Ole Miss Rebels, fresh off of a loss to Vanderbilt, defeating the then #4 ranked Florida Gators in the Swamp. Tequila and Houston Nutt, respectively, made them do these things because, via some mystifying, mind-altering force, they made them believe they were capable of such.

Dangerously enough, The Houston Nutt effect is far from exclusive to his players. It takes hold of the media every few seasons, causing the punditry of college sports - a notoriously ill-informed punditry at that - do wacky things like call Jevan Snead a first-round draft pick and label the Rebels as a BCS title contender. That silly media! Of course, this spilled over onto a fan base desperate and hungry for gridiron success and caused many of us to tout the same. We believed; mainly because we wanted to believe, but also because we allowed our better judgment to be taken over.

This effect, this belief, this high, though, ain't permanent. The mornings after the longest, most thrilling tequila-fueled nights are typically characterized by cruel headaches, broken items of significant value, and phone calls to your attorney. Tequila hangovers are brutal, and undeniably so. We all know someone who has sworn off of the sauce, Mexican or otherwise, after too many Cuervo shots at Milagro's, just as we are well aware that the apparent entirety of the Arkansas Razorbacks fan base as sworn off Coach Nutt after a decade of Hooter-itas.

Long nights of shamelessly dancing to Miley Cyrus and cheering on the Rebels to victory over LSU do not, for many, outweigh impromptu visits to the emergency room and stunning losses to Mississippi State.

Despite its glaring pitfalls, though, we at the Cup love tequila and Houston Nutt because, simply, we love getting a little crazy sometimes. We love disjointed babble and a feeling of invincibility. We love performing above ourselves, if only temporarily. And we love simplicity - we always have.

Of course we hate hangovers, bruises, and newfound enemies, just as unexpected losses to South Carolina wrench our Rebel guts, but we chalk that up to some sort of "yin and yang" type deal and move on. The bad times here, which are not forgotten, cannot be had without the good times here, which are mostly forgotten, despite our contentions to the contrary. So bring the good times, the tequila, and Houston Nutt's brand of Ole Miss Rebel football on.