One of the sobering realities of post-college life is that your friends, once concentrated within reasonable geographic boundaries, tend to disperse themselves all over the damned place, forcing you to once again establish new ties in a new hometown, making friends by testing your awkward and/or inappropriate jokes out on crowds of relative strangers. The Red Cup crew certainly suffered this fate for a while, but for now at least, three of us live within one city's limits. To tide us over during the Rebels' non-sports season, Ivory Tower, Whiskey Wednesday, and I have decided to take advantage of our close proximity to write about culinary delights.

This week, Ivory had entree duties (haha.... he said doodies), WW made a side, and I got my drank on. 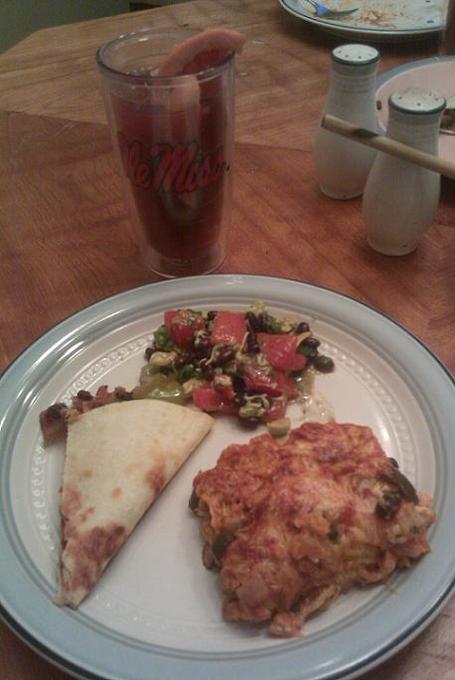 That's right. We chose Mexican food as our culinary masterpiece this week. Before we get started with the things I'll actually review, let me, for a moment, thank the two people who each week help make the flowers on the table totally acceptable... Mrs. Juco and SECBelle22. Both bring food each week that goes unreviewed. SECBelle this week made a delicious salsa salad (included in the picture) while my wife bought a nice chocolate cake and Reese's peanut butter cup ice cream for dessert. Thanks to the both of you.

Now on to the entree:

Chop up your pepper.  I used poblano, and it was very mild.  Use chipotle for a smokier flavor.  Or jalapeno for a little more heat.  Put that in a medium saucepan with some olive oil and cook on medium.  Mince three of your garlic cloves, then add them, along with the chili powder, cumin, and some salt and pepper.  Cook that together for 2 - 3 minutes, careful not to scorch the garlic.  Then add the chicken broth and tomato sauce.  Bring that to a boil, then let it simmer for at least 15 minutes.

Chop your chicken and cook it in some olive oil, salt, and pepper for 7 - 8 minutes on medium or medium high until done.  While that's cooking, chop two onions.  Remove the chicken from the pan.  Add the chopped onions and cook them for 2 - 3 minutes while you are mincing the last clove of garlic.  When you add the minced garlic, go ahead and add any other spices you think appropriate.  I added some cilantro.

Mix the chicken back into the pan with the onion mixture.  Squeeze half a lemon over the whole thing.

Spray a 9 x 13 pyrex dish with cooking spray.  Pour half a cup of the enchilada sauce in the bottom.  Cover the bottom with the tostadas, breaking them in half if you need to.  I used soft corn tortillas that did not stay together.  Perhaps soft flour tortillas would work.  Spoon about half of your chicken and onions over the torillas.  Sprinkle 1 cup of cheese over the chicken.  Pour another cup of enchilada sauce over all that.  Lay another layer of tortillas or tostadas.  Then more chicken.  At this point, you could also add some black beans to make it go further or some chopped tomatoes or squashes to get your V8 number up.  Another layer of cheese.  Another layer of tortillas.  A layer of cheese on top.  Then pour the rest of the enchilada sauce over the top.  Bake, covered, at 350 for 30 minutes.  Remove and let stand uncovered for 10 minutes.

It was definitely a good dish. There was a good bit of flavoring, and the layors worked really well. Overall, I think it came out tasting similarly to what you might find at a mexican restaurant (though with significantly less salt), but there was an element that we all agreed was missing. There wasn't enough texture for it to be the main course. Ivory remarked that next time he might leave the tostadas out overnight to allow them to stale, but I would go a step further and either fry them up to crispy or use tortilla chips instead (something I've done with a similar recipe). An element of crunchitude (no.... don't look it up) would have taken this dish from quite good to delicious.

One run-around-the-pan with olive oil
One cup of fire-roasted diced tomatoes, drained
Half of a red onion
Half of a bell pepper
Four cloves of garlic, chopped
Three small hot chiles (from my garden... serranos or jalapenos will also work, but use fewer, as they are a little bigger and spicier)
6oz or so of black beans
Half of a decent sized yellow squash
A good dozen or so leaves of cilantro
Salt, pepper, crushed red pepper
Lime juice
One 8" Flour Tortilla
1/4 bag of mixed cheeses

This part is all from WW directly -

For about two months, I underwent an extremely ill-fated experiment: I decided to become a vegetarian. Under the guise that eliminating meat from my diet would magically melt off my extra collegiate poundage, I went to work discovering how to feed myself without bacon, burgers, and chicken wings. Though the weight loss never happened, and I am once again free to pound the occasional Five Guys meal, I did learn some great new tricks in the kitchen. This one, a spicy vegetarian quesadilla, is easy, unique, and really filling.

First, in a cast iron pan, I make a sort of vegetable mush, using thin-cut pieces of whatever vegetables I have on hand. My staples here are usually diced tomatoes, black beans, and purple onions, along with whatever else I have handy. Tonight, for two large quesadillas, I used (in the order that I threw them in the skillet):

You know how you like your vegetables done; I usually like mine a little bit crisp, but in this recipe, I like to let everything cook together, so I add each successive ingredient in 2-3 minute intervals to let everything mix.

When the vegetables are almost done, prepare another skillet with another dab of oil. Lay down one flour tortilla (8" in diameter or so), shred some of your favorite cheese in a thin layer on top of the tortilla (I used cheap store brand mozzarella and some colby jack). When the cheese gets pretty melted, shovel some of the vegetable mixture onto one half of the tortilla, fold the other half over, press, and remove.

The veggie quesadillas were a stark contrast to the enchilada lasagna, since they packed a good bit of heat. Whiskey Wednesday's parents have a nice garden (mentioned above) which allowed us to use some pretty hot peppers in the recipe. Because of the amount of time all this had to saturate in the cast-iron skillet, the heat was on each vegetable and not simply the peppers themselves. I was also happy with the amount of cheese used. Too often, vegetarian dishes are just absolutely covered in cheese, and I think that's a mistake. This wasn't about the cheese but about all the vegetably ( again.... don't look it up) goodness in the tortillas. Overall pretty good. I could see an improvement if the tortilla itself had been buttered and therefore browned a bit more, but now I'm just being picky.

Mix wine, OJ, lemon juice, fruit, and sugar, and chill. When ready to serve, pour into punch bowl or large pitcher and add club soda. Serve over ice, or freeze in baggies and serve slushy. This recipe does not reqire the mixture to sit overnight and can be served almost immediately.

While cup reader Smeargle isn't very cool (Seriously? A pokemon name?), he has stolen a good sangria recipe from a friend and claimed it as his own. I actually had this on a boat with Smeargle a few weeks back and really liked it. When I found out we were making Mexican, I contacted him to get the recipe. It's really easy and makes a delicious mixture. The hint of club soda makes it taste a little bit more refreshing, and the lemon juice gives it the tartness necessary. Couple that with the fact that you can turn bad wine into tasty sangria, and it's a good thing all around.

So that's that. Next week, Whiskey Wednesday makes an entree. Ivory Tower probably makes a drink that's way too complex, and I try to extend my streak of making foods involving alcohol. I'm five for five so far.