One of the sobering realities of post-college life is that your friends, once concentrated within reasonable geographic boundaries, tend to disperse themselves all over the damned place, forcing you to once again establish new ties in a new hometown, making friends by testing your awkward and/or inappropriate jokes out on crowds of relative strangers. The Red Cup crew certainly suffered this fate for a while, but for now at least, three of us live within one city's limits. To tide us over during the Rebels' non-sports season (and let's face it, it's pretty much already started), JUCO, Ivory, and yours truly have decided to take advantage of our close proximity to write about culinary delights.

After one full rotation, JUCO again provides our entree, Ivory supplies the side dish, and I've brought the potent potables. Enjoy, and let us know what you think. 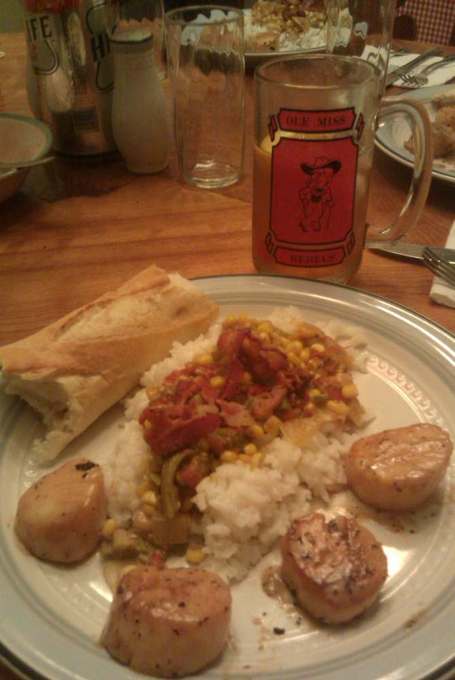 Scallops, Corn and Okra Jambalaya, and an Old Fashioned.

When we first kicked off Red Cup Cooks, our idea was to cook meals with some sense of theme or continuity. That certainly didn't happen this week, but we still threw together a pretty damn good dinner.

JUCO broke out the checkbook this week to provide us with something that doesn't grace our dinner plates very often: pan-seared scallops in an herb and cream sauce...

Admittedly, this was my first encounter with scallops, so I lack any frame of reference for how well this dish was executed. The scallops had an interesting texture, with a nice bit of sear on the tops, and a tender, fleshy center. The sauce was a nice complement; really easy to make, and brought a nice herbal flavor to the scallops.

Ivory Tower added a nice, simple side dish; it wasn't technically jambalaya, but hey, it hit the spot. Here's his (predictably) long-winded description:

If you're looking to stay regular, you don't need orange powder or menopause yogurt.  As I found out the next morning, you just need to throw some vegetables in a pot and cook them until they're niiiice and easy.  Put the right produce together in the right order and the flavor is as robust as the post-gestinal product.

Your ingredients are simple:  two tomatoes, one 16-ounce bag of frozen whole kernel corn, 1 lb. of fresh okra, two onions, 4 tablespoons of butter, and seasonings that you desire.

First, preheat your oven to 300 degrees and slice your tomatoes.  We're going to stew those.  Put the tomato slices in a pyrex dish with 3 tablespoons of butter, enough water to almost cover them, and spices like you'd like (maybe Worcestershire, Italian Seasoning, Tobasco, Chili Powder or a combination of the above).  After stewing the tomatoes, I regretted that I hadn't smashed two cloves of garlic and thrown them in there, too.  These can stew forever, but let them work in there for at least 20 minutes.

While those are stewing, chop the onions and okra.  Drop all that with a tablespoon of butter in a big skillet on medium heat.  Your best indicator on when these are ready are the onions.  They need to get a little soft, but don't let them caramelize or anything.  This should take about 15 minutes.  There's no need to season these yet.

After this mixture was done, I had to transfer it all to a larger pot because I didn't have a skillet large enough to accommodate all the produce.  If you've got one big enough (or you've got a cast iron dutch oven), then good for you.  In whatever you've got, combine the okra and onions with the corn and stewed tomatoes.  Now is the time to season to taste.  It is, nominally at least, jambalaya, so Tony Chachere's ain't the worst idea.  But, I could also see loading it down with chili powder, cilantro, salt, and black pepper.  You could also, I think, replace the chili powder with garlic and a half a teaspoon of cinnamon for an old world flair.

After you've seasoned it, cook it covered on medium low for 40 minutes or until 10 minutes before time to eat.  When you're ready to serve, take the top off, turn up the heat, and boil off any excess water (this is, after all, not a soup).

Plate it just like that if you're watching your carbs.  If you're poor and just trying to make a meal that is filling, serve the "jambalaya" over white rice.

Finally, when we thought of the Red Cup Cooks format, I envisioned the 'libation' portion to feature a variety of classic cocktails, and new twists thereon. So far, we haven't made anything that really qualifies as a cocktail, until this week. Get ready to get'cha Old Fashioned on, ya'll...

So the classic recipe is essentially this:

Later, other touches were added to what may have been the first drink referred to as a cocktail, most notably a splash of soda water. My recipe is way awesomer though, and here's how you should really do it:

At dinner, I made the more traditional version, and while it was good, it left me wanting my revamped version. It's pretty sweet, but what makes it a winner is the way the orange and the whiskey leave an amazing aftertaste behind. The cola may defeat the purpose of the bitters, but I like to think I can still detect a difference. Your mileage may vary, but this has probably replaced the mint julep as my all-time favorite beverage.

Anyways, that does it for this edition of Red Cup Cooks. We hope you'll give us your feedback, and maybe even let us in on what's happening in your kitchen.