One of the sobering realities of post-college life is that your friends, once concentrated within reasonable geographic boundaries, tend to disperse themselves all over the damned place, forcing you to once again establish new ties in a new hometown, making friends by testing your awkward and/or inappropriate jokes out on crowds of relative strangers. The Red Cup crew certainly suffered this fate for a while, but for now at least, three of us live within one city's limits. To tide us over during the Rebels' non-sports season, Ivory Tower, Whiskey Wednesday, and I have decided to take advantage of our close proximity to write about culinary delights.

This week, WW made burgers, I did chili cheese fries, and Ivory made a variation of the John Daly. 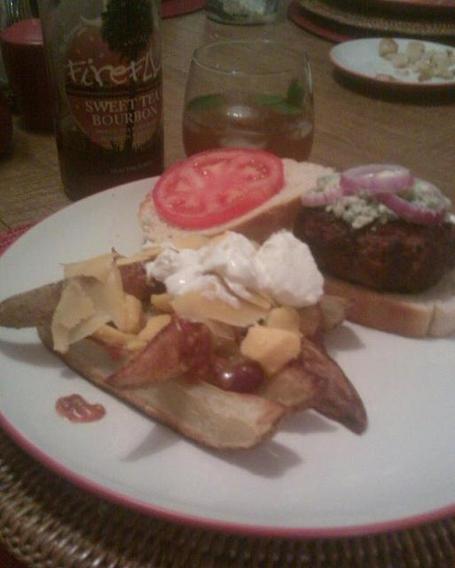 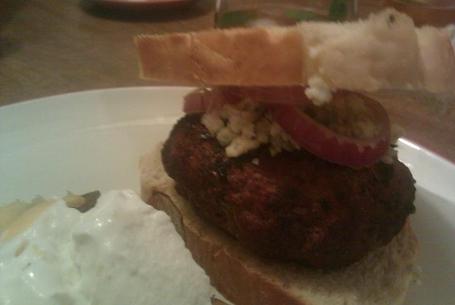 Burgers are the staple of all staples in the subset of "foods that guys can cook (and most claim to be superior at doing so)," so I won't bore you with puffed up claims of how awesome my burgers are. 'What makes a good burger' is highly debatable, and we actually argued a bit over dinner about two highly overrated (in my eyes) burger joints in Oxford and Jackson. I was going to omit the names, but in the interest of generating some comment debate, I'm calling you out: Phillips Grocery: you guys suck at making burgers; I hate that my friends sometimes have a hankerin' for your shitty charcoal pucks, and try to drag me to Burger Hell with them. And Majestic Burger: if I wanted a kitschy, overpriced burger that was swallowed by it's own bun, cooked improperly, dressed incorrectly, and served with a mountain of cold, soggy shoestring fries, I'll just go to Chili's... I hear their themed margaritas are off the chain. BACK ON TOPIC: you can cook your burger any way you please, so long as it makes you happy, and doesn't revolt your guests. However, if you're in the habit of making tiny, flat 1/4 pound shitburgers and burning them to a crisp on the grill, then at least give my way a shot...

This burger has some rich ingredients that I've never tried on a homemade burger before, so you'll need:

First, I cut off the tops of the garlic bulbs, drizzled the insides with olive oil, wrapped them in aluminum foil, set the wrapped bulbs in the pockets of a muffin pan, and placed them in an oven at 375 for about 30 minutes. This is how you roast garlic, n00bz.

Meanwhile, I dumped the ground chuck into a big mixing bowl, stuck my hands down in it, and got it all integrated, while pouring in a couple tablespoons of worcestershire. Because my french bread loaf had an oval-shaped cross-section, I made sort of oval shaped patties, really thick, about 1/2 pound each. If you want, you can make a little impression in the middle of the patty; according to Bobby Flay, this prevents the burgers from swelling up in the middle while they cook.

Salt each patty, and pepper the hell out of them on each side. Don't mix salt in with the ground beef before you make the patty; Ghost could tell you all about how salt unwinds proteins and yields yaddayadda bullshit... just don't do it, ok?

Here's where the rest of the instructions get pretty intuitive...

Put the burgers on your grill, go cut buns out of your French bread loaf, cut some onions...

Take the garlic out of the oven, and set it aside to cool. When it's done correctly, the cloves inside each bulb will be soft and buttery, and most of the pungency is gone. Done incorrectly, they'll be charred, useless nuggets. Use a fork, your fingers, whatever, and extract the roasted garlic from it's casing.

Flip the burgers, use a thermometer if you must... don't call the FDA on me, but if I have a little pink in the middle, I'm not going to hail an ambulance.

Throw some olive oil on those buns, and put them on the top rack of the grill for a minute.

Take the burgers off, put some roasted garlic, bleu cheese, and red onion on those bad boys, and go to town.

The burgers were very good, but they weren't all that special. I was hoping they would have ingredients mixed in, but Whiskey Wednesday didn't think we had time to roast the garlic before putting the burgers on the grill. He had places to be and women to be with. 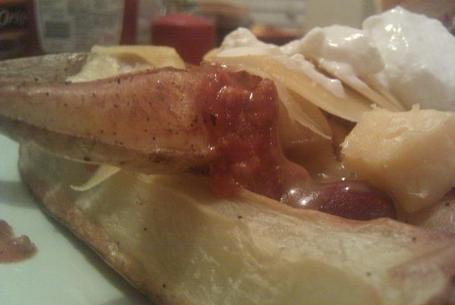 I wanted to push a sort of gourmet approach to a food that isn't typically gourmet at all. Chili cheese fries are typically made with french fried potatoes, something passed off as chili, and nacho cheese. While it works well together, I've just never been satisfied with that combination. Enter my solution.

Potatoes: Pre-heat the oven to 350 degrees. While it's heating, wash the potatoes and scrub them with your potato brush (seriously, you need one. There's dirt all over those things.) Pat them dry. Cut each potato into eight wedges. Place all potatoes on 2 baking sheets that are lined with tin foil. Drizzle with olive oil. Salt and pepper to taste. Roast potatoes for 30-40 minutes in the oven.

Chili: If chili is cooled, place Chili in pot cooking on low heat. Add paprika, hot sauce, and flour (be careful with the flour. Its purpose is simpy to help the chili clump together well since Wendy's chili is pretty watery. Don't add too much, and take it slow. Flour doesn't have an immediate affect.) Allow to simmer for 30 minutes.

Cheese: Slice it into shavings. Hopefully your cheese grater has this option.

Combine it all on a plate. Top with sour cream (optional).

How it turned out:

It was pretty much what I was going for, but I do wish the gouda had melted better. If I were re-doing it, I would put the gouda on before the chili. 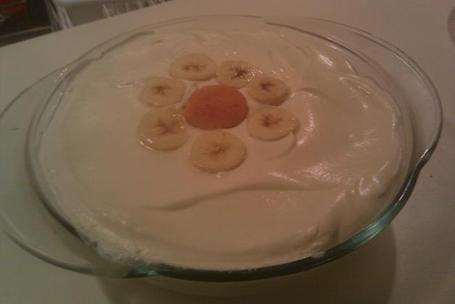 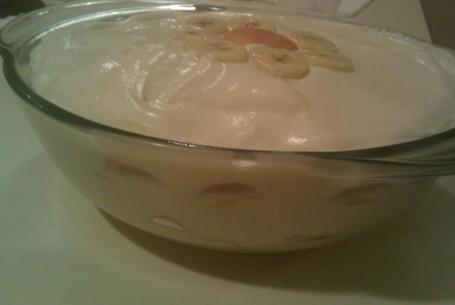 I don't generally talk much about the things not made by actual writers, but my wife made a ridiculous banana pudding. Really. Make this. It's absurd.