One of the sobering realities of post-college life is that your friends, once concentrated within reasonable geographic boundaries, tend to disperse themselves all over the damned place, forcing you to once again establish new ties in a new hometown, making friends by testing your awkward and/or inappropriate jokes out on crowds of relative strangers. The Red Cup crew certainly suffered this fate for a while, but for now at least, three of us live within one city's limits. To tide us over during the Rebels' non-sports season (and let's face it, it's pretty much already started), JUCO, Ivory, and yours truly have decided to take advantage of our close proximity to write about our second-favorite common interest (aside from Live Action Role Playing (or as we call it, LARPing), of course): food. And no... it's totally NOT gay.

Each week, the three of us will try to meet to cook an entree, an appetizer or dessert, and a potent potable to match our culinary selection. We'll provide recipes, pictures, and reviews for your summer perusal. Today, JUCO supplied our entree, Ivory made an appetizer, and I brought the libations. Enjoy, and let us know what you think... 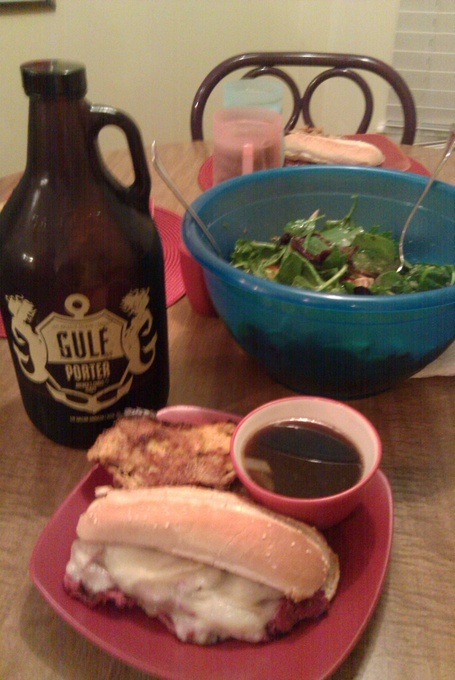 Peel and boil the potatoes for 20 - 25 minutes.  Fry the minced onion in one tablespoon of butter.  Mash the potatoes in a tablespoon of butter (or more, if you want).  Mix in the onions and the three beaten eggs.  Form the potato mixture into cakes, about like a biscuit.  Glaze all around with the two egg yolks.  Place on a greased cookie sheet and bake at 350 until golden brown.

For fun, form the knish with a bowl in the top in which you can fill toppings of your choice at the end.

1. Heat broiler to 500 degrees Farenheit. Combine broth, beer, onions, and Worcestershire sauce in small saucepan. Bring to a boil. Reduce heat to low. Separate layers of pastrami and add to pan. Cook until pastrami is heated through.

2. Split sandwich rolls and place on baking sheet. Arrange pastrami and onions on bottom half of each roll. Reserve cooking liquid and keep warm. Top each roll with 1.5 slices of chees. Broil 1 to 2 minutes or until cheese is melted and bubbly. Serve with mustard and reserved cooking liquid for dipping. 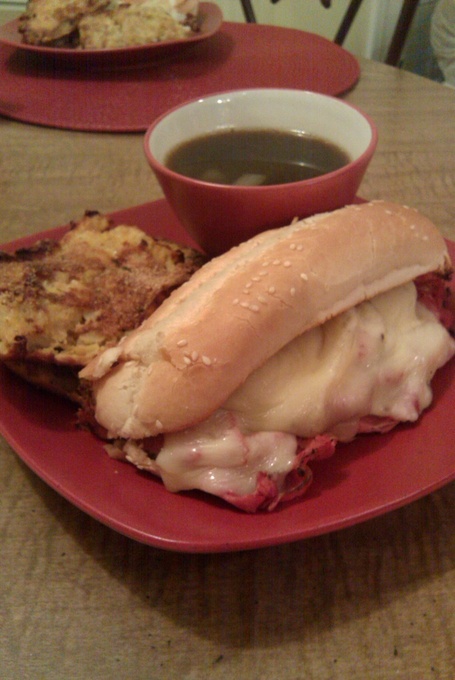 Getting into the review: our first The Cup Cooks meeting was a conservative success. Typically, we'll try something more complicated than sandwiches and beer, but we didn't want to over-extend ourselves on the first attempt. First, about the knish: it was pretty good, something I'd never had or really even heard of before. The potatoes are well-seasoned and fluffy, with a nice crisp glaze on the outside. Like Ivory indicates, it'd probably be more fun to add some more stuff to this recipe, but it was simple, tasty, and well-executed.

The sandwiches were another exercise in simplicity. The onions and au jus were great additions, the onions were saturated with juice while still retaining some crunch. Pastrami is a meat you don't have very often, but it's quite good, and if you can find really great, thick-cut pastrami with blackened edges, you could make this sandwich even better. Putting the whole sandwich in the broiler (watch it like a hawk, of course) really adds a lot to the texture of the sandwich, and overall, it was a great meal for something that you can throw together so quickly and feed so many people.

Gulf Porter is one of the better beers I've come across lately. I used to love porters, especially creamy and sweeter ones. Though I've cooled on them considerably, the Gulf Porter has much darker, earthier flavors (more coffee and wood, less chocolate and vanilla) than you find in a lot of porters. It's also pretty hoppy for a darker beer. Right now, you can only buy Gulf Porter in 64 oz. growlers, and this one was pricier than a 6-pack of other Lazy Mag beers (at 72 oz.), but I'd still say it was worth it, for what was a very distinctive beer that paired with the food really nicely.

Well, that's all for this week, keep your eyes peeled for future editions of The Cup Cooks, and we hope you'll pitch in your thoughts and ideas. Meanwhile, apparently we're not losing at baseball? Hmmm...