One (More) Concept the Mascot Selection Committee Left Off

Share All sharing options for: One (More) Concept the Mascot Selection Committee Left Off

Lions, Sharks, Voodoo Shamans, and Puppets are all neat things on their own--in their "native" contexts--but they don't fit in with what Ole Miss, a nicknamed university, or "school", in the northern region of the state of Mississippi, is. They don't suggest, at least initially, a rebellious spirit and hardly harken to the deeply-Southern, traditional nature of our university and the area in which it is situated. And, most importantly, they're not the result of any real, university-specific tradition which, per this bloggeur, is an important factor in the determination of a mascot.

These traditions, which are oh, so dear to our hearts, are born out of the northern Mississippi soil upon which our school stands up. As a school, up north, Ole Miss should adopt a mascot to represent this school-up-northness. This is something which I feel the students or whoever is behind the Mascot Selection Committee have completely overlooked. As such, I would like to propose a mascot which remains yet unproposed.

Submitted for your approval is... 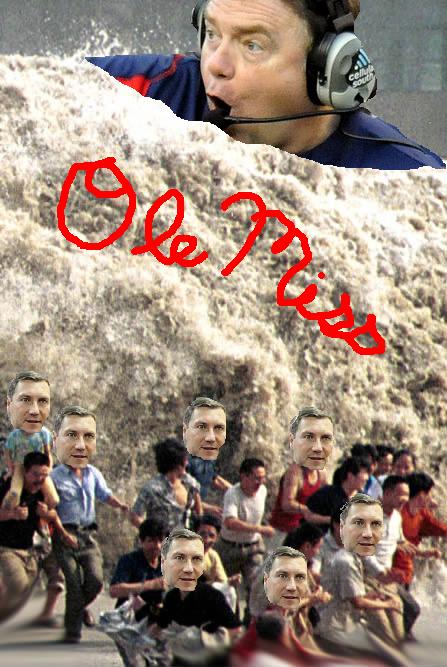 The Rebel TSUNami suggests relentless power, is reminiscient of the old "Mississippi Flood" days, and is certain to, at the very least, cause our fans to fucking pay attention because HOLY SHIT THAT THING IS GOING TO DROWN US ALL!

The TSUNami would also scare the turds out of opposing fans from the Indian Subcontinent, Oceana, or Southeast Asia...  I know, I know:

Ok, but seriously, this would be hilarious and annoy the shit out of State fans. I'm down for it.