Let's be honest, the only science we trust is the kind that sends Scott Bakula to different time periods randomly.  Straight from Ziggy, then, we bring you the latest new awesome thing from the lab rats in our research division.  Behold, the BIANCOMETER: 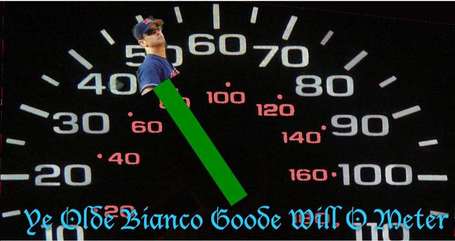 Some of us have been accused of being "Bianco Apologists."  Others of us have come just short of dropping the rhetorical equivalent of shit-filled flaming paper bags on his e-doorstep.  Most Rebel fans, though, vacillate between worship and bone-crunching disappointment when it comes to the man that is no worse than the second-greatest coach in Ole Miss baseball history.  And our feelings about the man are like a Shanghai ping pong tournament during the post-season.  So, we've introduced the "Biancometer," which measures levels of Rebel frustration with the little guy we (most of the time) hope will be around for a good, long while.  Let's check our levels:

Biancometer currently sits at 50 - slightly elevated or at "Ice Backfire Disappointment" levels.  To illustrate, here's what happened to WW tonight:

Every now and then, you almost pull off something really awesome, like turning a "rebuilding" season into an SEC Western Division championship or pulling off an epic "icing."  Whiskey developed a fool-proof plan to ice an FotC immediately after a frisbee game down here in Jackson, mysteriously placing an ice in a water cooler.  Unfortunately, his hidden ice was prematurely discovered, the tables were turned, and Whiskey turned out to be the iced party.

Devastating disappointment?  Hardly.  Missed opportunity for something cool to happen?  Certainly.  Most of us have taken it in stride.  But if IP addresses were heart rates, the clientele at Spirit would need to consult their doctor immediately.

We'll bring you updated levels as the Rebels progress (or don't) in Charlottesville.