Red Cup Cooks: Didn't I See You at Olive Garden?

Share All sharing options for: Red Cup Cooks: Didn't I See You at Olive Garden?

One of the sobering realities of post-college life is that your friends, once concentrated within reasonable geographic boundaries, tend to disperse themselves all over the damned place, forcing you to once again establish new ties in a new hometown, making friends by testing your awkward and/or inappropriate jokes out on crowds of relative strangers. The Red Cup crew certainly suffered this fate for a while, but for now at least, three of us live within one city's limits. To tide us over during the Rebels' non-sports season (and let's face it, it's pretty much already started), JUCO, Ivory, and yours truly have decided to take advantage of our close proximity to write about culinary delights.

Each week, the three of us will try to meet to cook an entree, an appetizer or dessert, and a potent potable to match our culinary selection. We'll provide recipes, pictures, and reviews for your summer perusal. Today, Whiskey supplied our entree, Juco made dessert, and I brought the libations. Enjoy, and let us know what you think...


This week, we patronized (in spirit, at least) Genco Pura for the simple, widely available elements that, when mixed together, make the Italian dishes, which convince people that you are fancy and loaded.  Do you have meat?  Do you have cheese?  Tomatoes, onions, and peppers?  How about flour, milk, and eggs?  From there you're able to make a ton of traditional Italian dishes.

Well, that's not all.  Because moreso that the substantive "food" elements of Italian dishes, when we think of "Italian," we think of herbs.  I, personally, think of allium sativum - garlic.  Though, it has been used as both food and medicine for thousands of years all around the world, it seems that Mississippians associate it first with peninsular food and then with East Asian food (in fact, a traditional Korean creation story says that one of the gods fed a tiger/bear/woman some garlic before sexing her up; from thence came man).  So, naturally, we ate a ton of garlic on Tuesday night, and, consequently, I've heard that Juco's wife slept on the far side of the bed.  Sorry about that, Mrs. Juco.

It started out with a simple, elegant Italian appetizer - bruschetta.  Now, if you remember hearing about bruschetta a few weeks ago from Alton Brown, you're right.  And, in fact, I pretty much stole Brown's simplistic methods for making allegedly authentic bruschetta.  If you go the rest of your life making your "fancy" meals by just doing exactly what Alton Brown tells you, then you could do a whole lot worse.  Alton settled the age-old debate about whether it is pronounced "broo-SHET-uh" or "broo-SKET-uh."  Apparently, it's either. 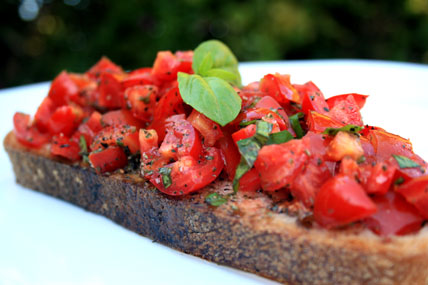 If you put garlic in it, you could just call it "vampire proof toast."

For those of you not watching Food Network on Friday nights, here's what I did.  I took the cheapest french loaf I could find at McDade's (at $0.89, I was actually pretty please).  Then, I sliced it no more thick than 1 inch.  After that, I just toasted.  Nothing special so far.  After the toast was nice and golden brown, I took it out of the oven and rubbed each piece with a peeled clove of garlic and, then, brushed each piece with olive oil.  This, according to Brown, is sufficiently prepared to be called "bruschetta."  However, like many of you might do, I had already chopped together tomatoes, onions, and garlic with a pinch of salt and pepper.  While the bruschetta was toasting, I had the chopped rabbit food chilling in the fridge.  You should eat the bruschetta as soon as you can after removing the toast from warmth and the veggies from coldth because the mix of temperatures is half of what makes bruschetta so refreshing and tasty.

While Whiskey was preparing the entree, we also gave a try at, perhaps, the most odd mixture of imbiberies imaginable.  Meet your ingredients:

Sparkling wine?  What the hell, Ivory?  You're such a gay.

Oh, damn, Ivory!  That's disgusting!  You didn't mix that together around the food did you?  What were you thinking you sick, evil man?

No doubt that this is a strange, strange thing to try.  It took me a good, long time to pick a drink that was all of available, different, and safe.  After all campari is a traditional italian liquor, but it is not available everywhere and, besides, it's not the sort of thing you drink by itself.  We thought of trying a cocktail called "The Boulevardier," a mixture of campari, sweet vermouth, and bourbon, but that would have required me to buy two bottles of liquor that (let's be honest) I probably wasn't going to use again under next to any circumstances.  Meanwhile, the two well-known Italian brands of beer, Moretti and Peroni, are a little too well-known for the kind of exercise where we want to be able to tell you what we thought about something you might not have imbibed.  So, while this mixture of Irish pub stout and Italian-themed (but California made) cheap sparkling wine was quite a strange idea, it at least left open the possibility that, if totally disgusting, we could keep the two segregated and enjoy our booze.  Here's how it looked together, mixed 50/50: 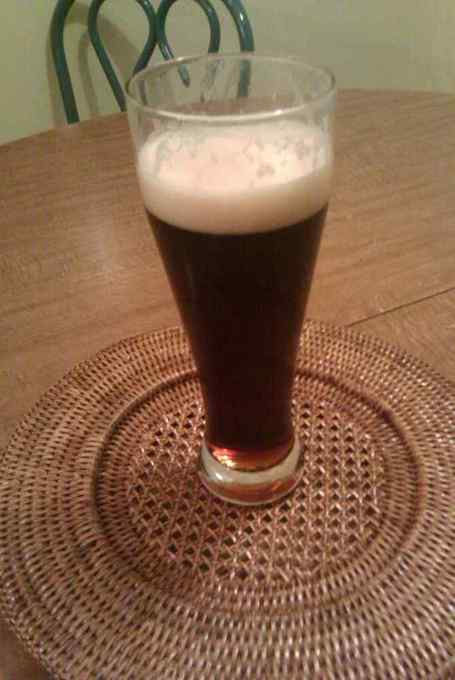 Not so different from Guinness, huh?  Well, it tasted different.  A lot different, in fact.  Our reactions were mixed.  Juco said, "Huh."  Whiskey said, "Not bad."  Mrs. Juco made an ugly face and said, "Eew! Beer!"  I, on the other hand, had another.  But the three of us who weren't in the half bath washing our mouths out all agreed about this little mixture (that I'm calling the "Irish Miata Bomb").  The sparkling wine was a stronger flavor than the Guinness, but the beer successfully muted the fruit and sweet flavors that are, for many guys, a little overpowering in most sparkling wines.  So, if you have a guilty pleasure for some of the aspects of women-drink, you might be barking up a sufficiently bearded tree here.  The other thing this mixture did was mix in some carbonation to and lighten up the old malty flavors of Guinness.  It was a significantly less filling beer.  It might be a while before I try this concoction again, but if you fall closer to me on the "alcoholic taste tolerance" scale, you probably won't hate it.  And if you do, well just feed your lady the rest of the bubbly and you've got a five-pack of Guinness to sip on.  Win / win.

All this time, Whiskey is making ravioli.  First, dude just mixed up some flour, milk, and eggs to make pasta dough.  Pasta dough is a good deal more dry that bread dough.  So, don't just take your favorite marble rye recipe and think you're two steps away from home-made rotini.  You also need a pasta making machine, like this one: 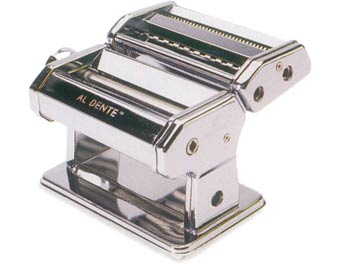 Different machines make different pasta, obviously.  A guy like this rolls out thin sheets from which you use cookie cutters to make either little square or circles, either one will do just fine.

While you are rolling out the pasta, you will want to have your ravioli filling going on the stove.  We used 3/4 of a pound of spicy Italian sausage, 1/4 pound of ground pork, and enough shredded mozarella to hold it all together in the end.  Take your little pastas and fill them.  You can seal them with a little egg fingered around the edges and either fold one piece together or press one on top of the other.  Then take your fork and press it around the edges to seal it for good and make those cute little indentations around the edge.  Start your water aboiling as your are filling the raviolis.  When everything is filled and boiling, toss them in.

Now, work quickly on your sauce.  You should already have some chopped onions and diced tomatoes ready to be food processed.  Process.  Throw them in a pot with a little cream, a little vodka, any amount of tomato sauce that gets you to the consistency you like out of sauces, and spices that warm your heart (may I suggest garlic?).  Whiskey kept it simple with salt, pepper, thyme, and chopped garlic.  Before you know it, those raviolis will be done.  Remove the from the boiling water and let them hang out a minute, so that they are dry enough not to water down your sauce.  Then introduce pasta to tomato based concoction and, voila ... 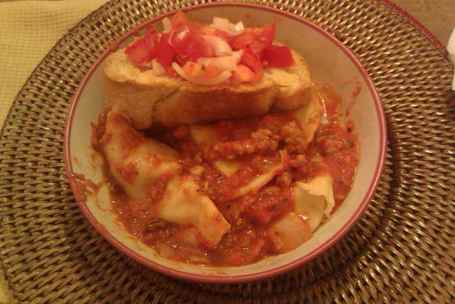 Italy all up in ya' griiiill.

It was amazing how this dish - that feels so uncommon to Americans when not served up in a restaurant or out of a can - was made with really simple, readily available ingredients.  Sure, not everyone has a pasta-maker at their house, but at +/- $35.00 they aren't an unreasonable addition to your home kitchen.  And because you're pretty familiar with every ingredient that went in this little puppy, you know it tasted pretty darn good.  The ravioli was left a little al dente, which was a great texture alternative to the meat and sauce.  Meanwhile, the spicy Italian sausage provided just enough kick to make you want to take a few seconds between each bite and savor it.

BONE appa TEET!  (See what I did there?)