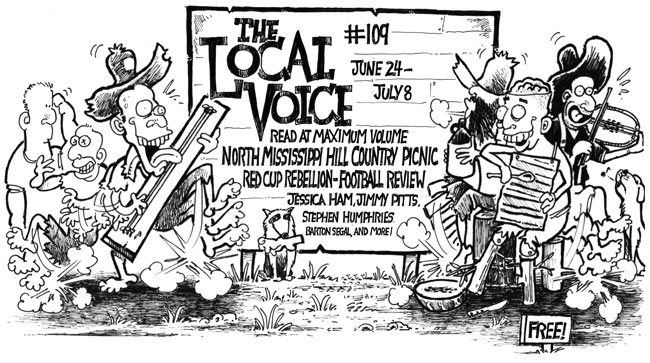 This is a good'un. Ivory Tower opens our (cue dramatic sound effects--like an echo, yeah, an echo would be cool) SIX PART SEASON PREVIEW via The Local Voice. Up first, a quick look at our offense.

Part I:  An Old Reliable Offense

Though only 69 days remain until the start of football season (71 if your football season does not start until the Rebels' does), some of us do not have this strange form of "football" going on in Africa to calm our nerves.  We are getting fidgety; having withdrawals.  And the fact that we are getting closer, makes us more like a kid 10 miles from Disney World than a calm businessman awaiting a prime Kobe steak; we are not comforted because we will soon be satisfied.  Soon is not soon enough AND I NEED MY FIX NOW!

To help real fanatics calm their nerves, we offer a tonic:  a season preview in six parts paired with an appropriately themed drink.

This bi-week, we preview the offense.  To get a feel of what the Ole Miss offense is going to be like, open up a bottle of Old Crow Bourbon and pour it in your red cup all by itself.  Did you put ice in there?  If you did, then start over; you did it wrong.

"Neat?" you ask.  Yes.  And that's probably the same question you will be asking when we hand the ball off sixty times a game in 2010.  Cheap bourbon has the same punch and consistency that the Rebel offense will have in the hands of tailbacks Brandon Bolden, Rodney Scott, and Enrique Davis.

Did you want something a little more flashy?  That's cute.  Maybe you had dreams of Jesse Grandy and Korvic Neat flying around the field like proto-Dexters.  Well, that requires a receiving corps that can stretch the field a little, and when it comes to receivers, we could be a one-pony-trick (and that's assuming our top show horse, Pat Patterson, recovers from whatever got him suspended for spring practice).  So, when you metaphorically sachet up to bartender (and offensive coordinator) Dave Rader and order a "fifty-yard-bomb" and an "end-around-tini" for the lady, Dave's going to tell you the same thing Marty McFly got told in Back to the Future III.

This is not to say that quarterback Nathan Stanley, who has firm control of the job post-Spring, is not capable of throwing the ball.  In fact, we expect that, when he does throw the ball, he will be more consistent than his predecessor, Jevan Snead.  It'd be hard to be less so.  However, his coach, Dave Rader, is the same guy that has made a living building "management machines," quarterbacks that generate the offense necessary to keep defenses guessing (and no more) and make few mistakes.  Think former Rader pupil Brodie Croyle and his 14 touchdowns, 4 interceptions, and 60% completions in 2005.  Houston Nutt knows that this kind of offense gives us the best chance to win in 2010.  Stanley's play, you should hope, will be like cheap bourbon in your whiskey coke; it ought to get the job done, but it ought not be too conspicuous about it.

One place where we might still lack some punch is on the offensive line.  At one position or so we were BLINDSIDED by a loss O'ER which we were not able to compensate.  Though the threatened legal consequences of identifying any particularly player would not go over SO WELL with our corporate sponsors, let's just say that last year we had some holes on the offensive line and this year will be no different.

Nah, but, Bradley Sowell won't suck much at all this year.  It's at center and the guard positions where we ought to be worried, since outside of Sowell and Bobby Massie (and maybe misbehaving Rishaw Johnson), the Rebels have little experience up front.  But they have decent size.  Assuming a lineup that includes Sowell, Massie, Johnson, A.J. Hawkins, and Alex Washington, they will average 314 pounds--or roughly two Abners Hungry Lush's washed down with a McAllister's tea and rounded out with anything Holli's Sweet Tooth has ever sold.

All in all, this is going to be an offense that will make your granddad feel right at home.  We're pulling going to pull the old stuff out of the back of the liquor cabinet, blow the dust off, and realize that, while offensive schemes don't age quite as well as a bottle of Napa Valley's best, it will still get the job done.

Besides, defense wins championships, right?  So, we've got nothing to worry about.