Who Is This Guy? Joe Van Meter

Share All sharing options for: Who Is This Guy? Joe Van Meter 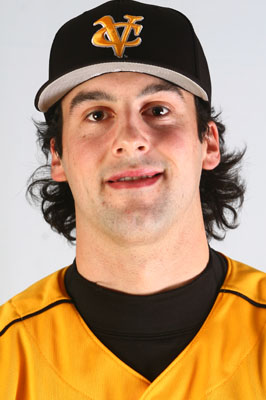 I promise this is not the mugshot of a (known) meth addict.

In 2006, Joe Van Meter was on top of the world. A New York resident, Van Meter followed up a solid high school career with an offer to play baseball at powerhouse Arizona State University. He was going to be a sundevil. After redshirting for his first season in Tempe, Van Meter decided to transfer to another baseball powerhouse... THE VIRGINIA COMMONWEALTH SOMETHING OR OTHERS!

So yeah. That's Joe Van Meter's pre-VCU career in a nutshell. Now for what he has done in Virginia.

This season, Joe Van Meter (6'2" 195 lb. RHP and 3B) is batting .433, having started every game. Yeah. That's a pretty nasty batting average. That's a lot like the batting average of the best player at each Rob Reinstetle stop BEFORE Ole Miss. Van Meter has hit seven triples and ten home runs. Having driven in seventy-two runs on the season, Van Meter is an intimidating guy at the plate.

He isn't used very much on the mound, having only appeared in thirteen games this season with two starts and 23 total innings pitched. Van Meter sports a 5.40 ERA and has a strike to walk ratio of only 13:11. Still, opponents are batting a paltry .253 against him, so I guess they could use him in relief some if they make a deep regional run.

Also, if you want to yell things at him, talk about how his favorite food is "Omaha Steak." Then remember that he has actually gone there before, and cry yourself to sleep.